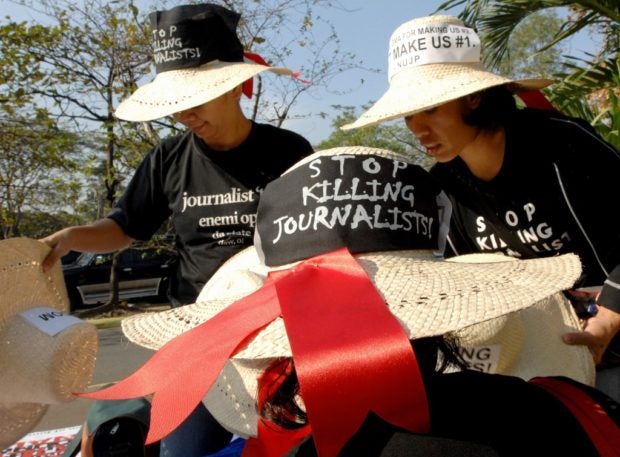 MANILA, Philippines—”Do not hesitate to attack me, criticize me, if I do wrong in my job. It is your duty to your country. As I have my duty to the people to serve you.”

This was President Rodrigo Duterte’s remark in 2016, asking media to be critical of him if he does wrong as the republic’s highest official.

But five years later, his remarks would ring hollow.

Last July 2, the Paris-based Reporters Without Borders (RSF) named Duterte as among 37 government leaders who have led relentless crackdowns against news media.

Since his election in 2016, Duterte has waged a “total war” on media, which have been considered as “collateral victims of his brutal methods, which tolerate no criticism or even nuance coverage of his policies,” said RSF.

The group said Duterte employed an “arsenal that includes spurious charges of defamation, tax evasion or violation of capital legislation; rescinding broadcast licenses; getting accomplices to buy up media outlets and bring their journalists into line and using an army of trolls to subject journalists to online harassment.”

The Philippine Center for Investigative Journalism (PCIJ) said that in Duterte’s second year, he singled out three media organizations with threats against their owners, which he acted on: Philippine Daily Inquirer, ABS-CBN and Rappler.

These media companies, PCIJ said in a report, had one thing in common: They “proactively investigated the rising number of deaths from the government’s war on drugs.”

Attacks from Duterte, others

In 2020, as the Philippines grappled with the COVID-19 health catastrophe, ABS-CBN, a broadcasting company that has been publicly assailed by the President, was denied a franchise.

When ABS-CBN went off air, 11,000 employees lost their jobs, but this was dismissed by Duterte, who said in February 2021 that even if Congress approved the network’s franchise, he will not allow the National Telecommunications Commission (NTC) to give the broadcast giant a permit to operate.

Maria Ressa and Rappler were also attacked by the government. RSF said that the President’s associates have been targeting Ressa and the news website through several cases of tax evasion and defamation or by weaponizing the law.

In 2018, after being singled out by Duterte in his second State of the Nation Address, Rappler’s license to operate was revoked by the Securities and Exchange Commission.

“Hounded by lawsuits and prosecution brought by Duterte’s allies, she is facing the possibility of sentences totaling around 100 years in prison,” RSF said.

For years, media found itself at the receiving end of the President’s expletives, but the hostility escalated when Harry Roque, Duterte’s spokesperson, started displaying rudeness toward reporters.

Recently, the Foreign Correspondents Association of the Philippines (FOCAP) said it was “deeply disturbed” by Roque’s response to a BBC report on Chinese ships preventing Filipino fishermen from entering Panatag Shoal, an area inside the Philippines’ exclusive economic zone (EEZ).

In March, results of a survey by the Social Weather Stations showed that 65 percent of adult Filipinos agreed that “it is dangerous to print or broadcast anything critical of the administration, even if it is the truth.” At least 16 percent disagreed while 18 percent was undecided.

In 2020, denying a CNN Philippines correspondent a chance to clarify, Roque berated Triciah Tejada after accusing her of reporting on inaccurate information in a story she did not write.

In 2018, when Rappler’s Pia Ranada, a Malacañang-accredited reporter, was barred from covering a press briefing, Roque asserted that it was not a “press freedom” issue.

But government’s assault against media was not limited to denying ABS-CBN a franchise or to lawsuits against Ressa and Rappler. Words coming out of Duterte’s mouth were tantamount to attacks and threats.

The assault on media, however, took deadlier forms.

CMFR said that 52 cases of intimidation, 37 libel cases and 20 cases of online harassment were also reported. 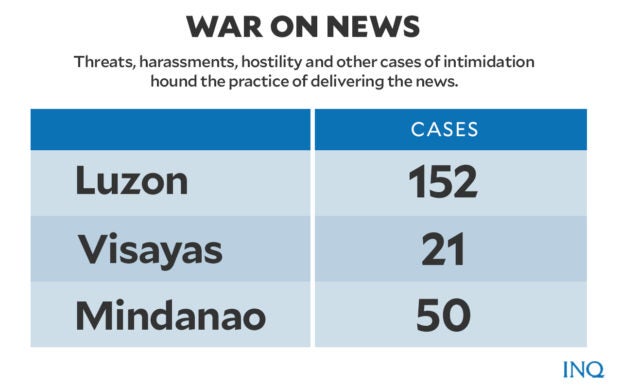 It said that most of the cases were in Luzon with 152 cases. Mindanao has 50 while Visayas has 21.

“Attacks and threats on press freedom diminish not just the news media. It also weakens the capacity of media to sustain people’s unfettered exchange of ideas about public issues,” the group said.

Nearly half of all the attacks can be traced directly to state agents, the local media monitor said. These included national (34) and local government officials (38), police (34) and military (8).