FILE PHOTO: Residents wearing face masks and shields queue up to receive a dose of the AstraZeneca/Oxford COVID-19 coronavirus vaccine inside a Catholic church turned into a vaccination center in Quezon City, Philippines, on May 21, 2021. (Photo by Ted ALJIBE / AFP)

MANILA, Philippine—In the Netflix documentary series “How To Become A Tyrant,” one of the rules in the playbook of would-be dictators was to surround themselves with trusted allies who would do all their bidding, blindly, and sing nothing but praises to their masters.

Tyrants, dictators, strongmen thrive in the comfort zones that their allies, or sycophants, create by taking bullets for their bosses or praising them to high heavens.

To the point of calling their bosses “Doctor”, which Ronald dela Rosa, popularly known by his nickname “Bato,” recently did in reference to his idol Philippine President Rodrigo Duterte. Dela Rosa was Duterte’s first national police chief and now fiercely pro-Duterte senator.

It sounded eerily similar to how Haitian tyrant Francois Duvalier had been referred to—“Papa Doc”. In Duvalier’s case, it was not a superlative as he was a real doctor although Papa Doc, according to historical records, did not save but took lives (up to 60,000 people) in keeping with another rule in the strongman playbook in How To Become A Tyrant—Kill or Be Killed.

Like in the tale of “The Emperor With No Clothes” sometimes someone in the crowd would notice the nakedness and scream it. In the case of Doc Duterte, as Dela Rosa referred to his patron at a political gathering, it was not someone, it was something—numbers.

“The country is like a patient,” Dela Rosa said at a meeting between Duterte and the political party that adopted the then Davao City mayor during the 2016 presidential race, PDP-Laban. The Philippines, Dela Rosa proclaimed, is “healing because there is Doctor Duterte.”

Duterte had expressed distaste for being licked in the butt by allies but this was a political gathering and Dela Rosa had just hopped aboard the train of cheerleaders who are convincing the President to run for Vice President in 2022. From the looks of it, they are succeeding.

But going back to Dela Rosa’s homage to Doc Duterte who’s healing the nation, the numbers had just screamed that the emperor was naked.

Dela Rosa said Filipino children are now enjoying the “peace and order” that was “achieved through Duterte’s leadership.” He said even parents feel that their kids are safe from criminals now.

In 2020, however, while there was a decline in crime volume, the months of lockdown led to an increase in cases of domestic violence, child abuse and various rights violations.

Data from the Philippine National Police—Crime Information Reporting and Analysis System and Women and Children Protection Center showed that 2,678 cases of child rights violation like rape, acts of lasciviousness and child abuse and exploitation were committed from March 1 to May 15 and 1,384 from May 16 to June 2020..

“The duration of quarantine and further imposition of lockdowns increases the vulnerability of children to abuse, violence and exploitation,” the Council for the Welfare of Children said in September 2020.

The Philippine score was 14.8899 in the Global Finance Safety Index. Iceland, the country on top, scored 3.9724. The higher a country’s score is, the lower it is in terms of ranking.

In a report last June, Ibon Foundation said that while the government claimed to excellently address the health crisis, “it has become clear that the Philippine government’s militaristic and non-scientific pandemic measures have resulted in worse health conditions for most Filipinos.” 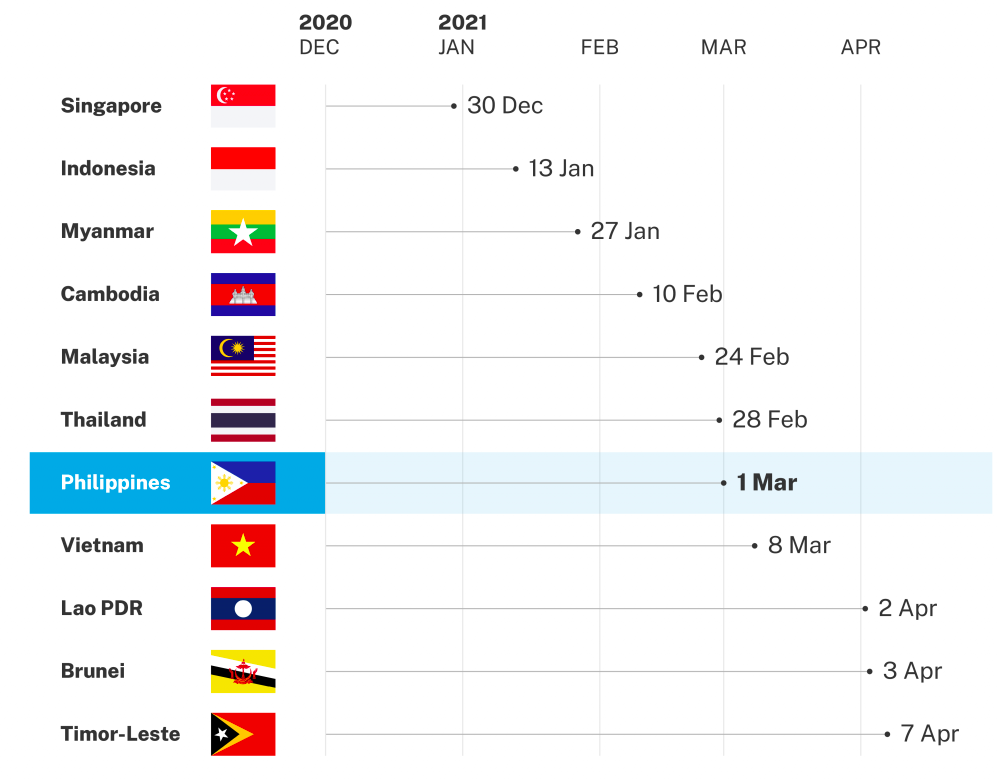 Ibon Foundation said that in Southeast Asia, the Philippines was one of the latest to commence its rollout of vaccines. Singapore, which ranked first, started vaccination Dec. 30, 2020 while the Philippines which was at seventh spot started the same on Mar. 1, 2021.

The group pointed out that as of June 9, 2021, the Philippines is among the slowest to progress in terms of vaccination. 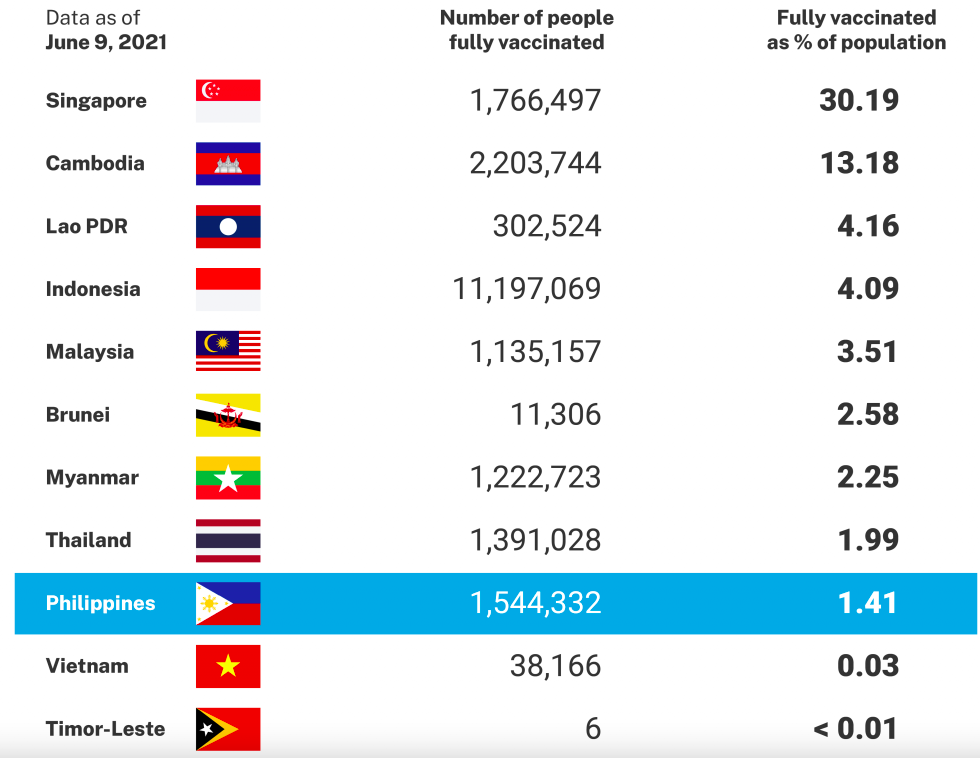 Even Filipinos said they disapprove of the government’s response to the health crisis.

In a survey report titled “The State of Southeast Asia: 2021” released by the Asean Studies Centre of the ISEAS-Yusof Ishak Institute in Singapore last February, majority or 53.7 percent of respondents from the Philippines expressed disapproval of the Duterte regime’s pandemic response.

The report revealed that 17.9 percent of Filipinos said they “strongly disapproved” of the government’s efforts against COVID-19–the highest disapproval rating out of the 10 countries in the region. At least 35.8 percent said they “disapprove,” 20.9 percent were neutral, 19.4 percent approved, and only 6 percent answered that they “strongly approve.”

Dr. Regi Pamugas, of the Health Action for Human Rights, said Bato was wrong to liken Duterte to “a doctor healing the Philippines,” saying that if Duterte’s COVID-19 response was good, he should employ health experts in dealing with the health crisis, instead of military men.

Ibon Foundation said that the government’s response to the health crisis also impacted the country’s economy.

Ibon executive director, Sonny Africa, said that if the President was a doctor “healing the Philippines,” he should be sued for “malpractice” because of the administration’s failure to effectively respond to the pandemic.

He cited the regime’s refusal to give financial aid, and it’s over-reliance on lockdowns that has caused record joblessness, hunger and the closure of small business.

“The economic rebound won’t even begin until the end of 2022,” said Africa.

“Returning to even just the same growth path before the pandemic is uncertain and maybe even unlikely especially with the administration so bereft of new ideas to resuscitate the economy,” he said. 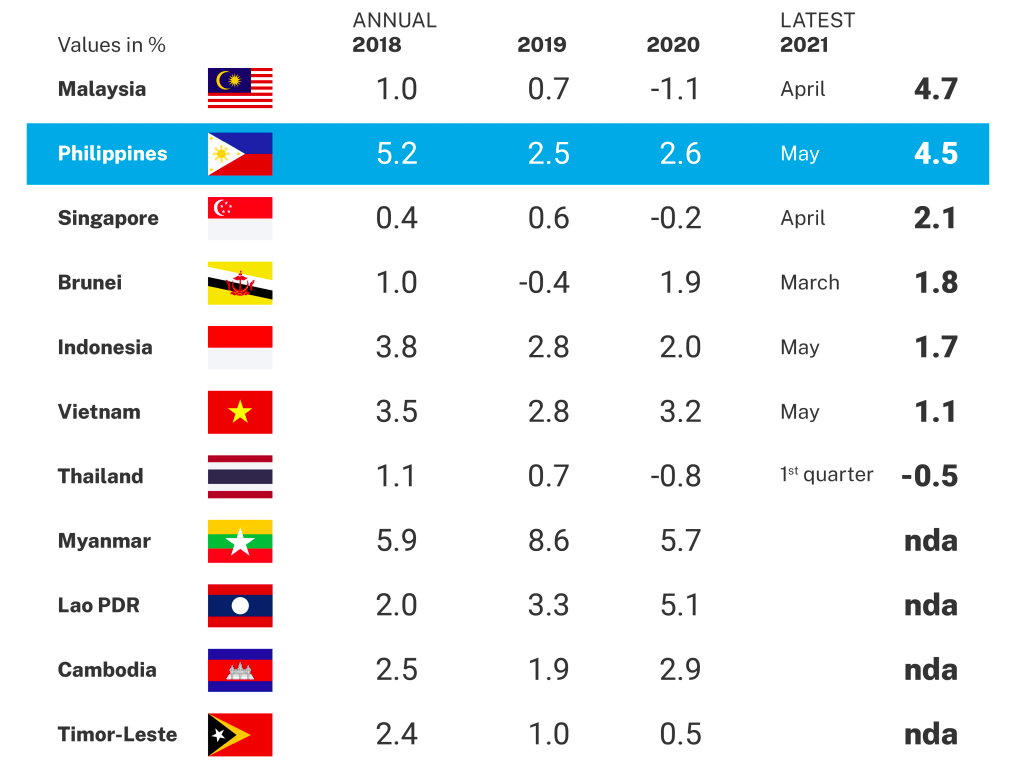 It also said that the Philippines ranked first on a list of Southeast Asian countries with the highest unemployment rate with 8.7 percent. In May, however, the Philippine Statistics Authority said the rate decreased to 7.7 percent. 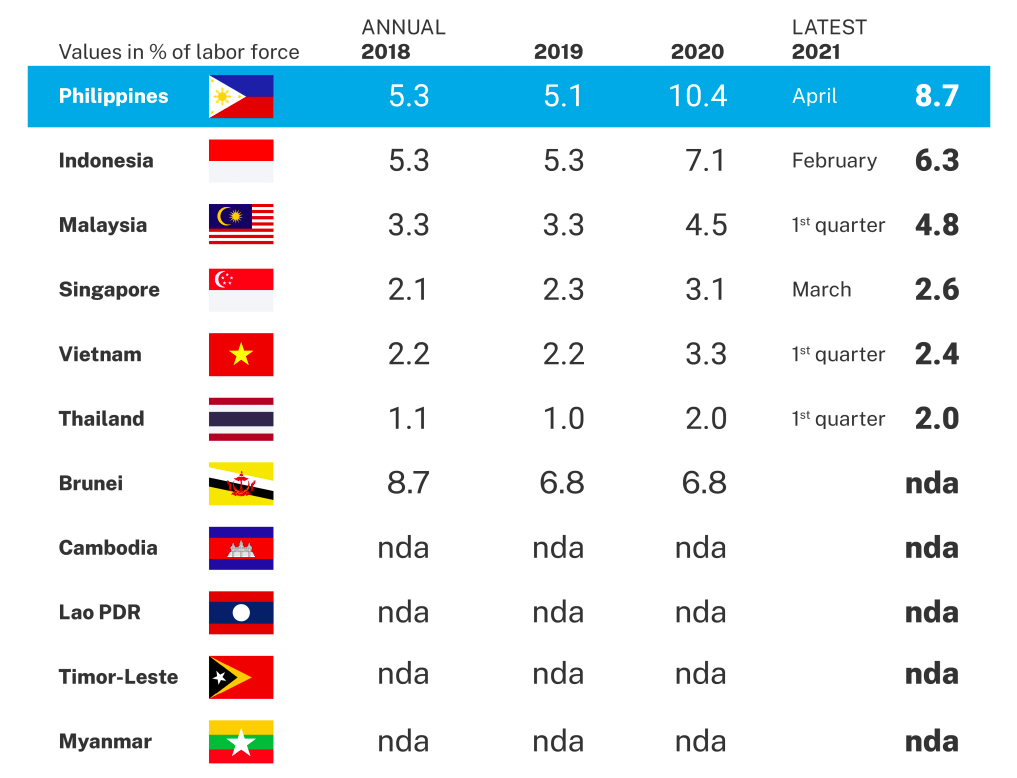 Ibon Foundation, in a Facebook post, said that the latest data on labor force “show that millions of Filipinos are still struggling to find work or turning more and more to informal jobs and self-employment to survive.”