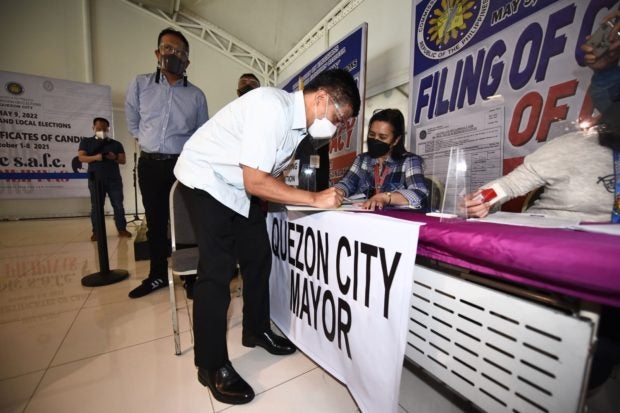 Anakalusugan Rep. Mike Defensor files a COC for mayor of Quezon City on Oct. 7. He is challenging incumbent Mayor Joy Belmonte and is one of the familiar names vying for top city positions. CONTRIBUTED PHOTO

As the Commission on Elections (Comelec) ended the filing of certificates of candidacy for 2022 last Oct. 8, the list of candidates for mayors and vice mayors in Metro Manila looked like a photocopy of that in the 2019 elections, except for a few new, but familiar names.

Metro Manila, which consists of 16 cities and Pateros, is the economic hub of the country and produces more than half of its gross domestic product. It has its share of the 4,486 and 3,968 individuals who will seek mayoralty and vice mayoralty posts.

In Quezon City, the battle for the mayoralty post is between the current chief executive and a party-list lawmaker who previously served in the Cabinet.

On Oct. 7 Anakalusugan Rep. Mike Defensor and former lawmaker Winnie Castelo, both candidates of the Malayang Quezon City, filed their certificate of candidacy (COC) for mayor and vice mayor.

Defensor, former Cabinet member of the Arroyo administration and nephew of the late senator Miriam Defensor Santiago, said he wants to extend financial assistance to informal workers, teachers, medical workers, police officers, government staff, and those who lost their jobs because of the COVID-19 crisis.

Belmonte said she wants to continue the gains of Quezon City, especially programs and projects about the economy and the creation of livelihood opportunities.

In Caloocan City, the battle for the top local post is likely between 1st District Rep. Dale Malapitan and 2nd District Rep. Edgar Erice, who filed their COC last Oct. 6 and Oct. 7.

Malapitan, son of Mayor Oscar Malapitan, will switch posts with his father who will seek a seat in Congress. He filed his COC with running mate Councilor Karina Teh as candidates of Aksyon at Malasakit.

He said he will primarily have programs about education, health, infrastructure, and employment in Caloocan City, saying he has an intent to serve residents.

He said he wanted to improve the lives of Caloocan City residents, “especially those living in the peripheries,” explaining that he will create programs for them.

In Pasig City, two individuals will fight for the highest posts—Mayor Vico Sotto and Vice Mayor Iyo Bernardo, who said he has nothing against the incumbent and highly popular chief executive.

Sotto, who ended the Eusebios’ 27-year reign in Pasig City when he won the elections in 2019, filed his COC last Oct. 1 with former lawmaker and basketball player Dodot Jaworski.

The 32-year-old mayor is the executive vice president of Isko Moreno’s Aksyon Demokratiko, but he skipped the party’s national convention because of previous commitments.

He said he will always commit himself to performing his responsibilities. “Let us strengthen reforms so that every Pasigueño will feel improved services of the city government,” said Sotto.

Bernardo filed his COC last Oct. 7 with lawyer Christian Sia as running mate, saying he wanted to give residents an option.

He said he wanted to narrow the gap between the rich and the poor in Pasig City by initiating several programs, including financial assistance to residents.

The lawmaker Gatchalian is presently serving his final year in the House of Representatives. They filed their COC last Oct. 1 with Vice Mayor Lorena Borja as candidates of Tuloy ang Progreso.

As candidates of the Nationalist People’s Coalition (NPC), they seek to pave the way for Valenzuela City’s recovery from the COVID-19 crisis, saying that they will continue what they started.

In Parañaque City, Erik Olivarez, representative of the 1st District, filed his COC as his brother, Edwin Olivarez, the present city chief executive, will seek a post in Congress.

Elected as representative in 2013, Olivarez, who served as the head of the Committee on Government Enterprises and Privatization, said he would be honored to continue his brother’s legacy in Parañaque City.

In Taguig City, the fight for the city’s highest post is between the Cayetanos and Ceraficas again. This time, however, it’s no longer Lino Cayetano.

Cayetano, who served as mayor from 2010 to 2019, will bid to replace her brother-in-law, who said he believes in the leadership of his brother’s wife.

Cayetano said she will do everything to continue the local executive’s efforts for the residents of Taguig City, saying that she will imitate his brother-in-law’s dedication.

Former Taguig-Pateros Rep. Arnel Cerafica, who lost in his bid for the city’s highest post in 2019, will challenge Cayetano. He filed his COC last Oct. 5 with his wife, Janelle Cerafica.

The two are candidates of the Partido Pilipino sa Pagbabago, who seek to “bring change” in Taguig City. “Partners in life, partners for Taguig. We will help and serve,” they said.

Last Oct. 1, Biazon and Vice Mayor Artemio Simundac led the candidates of One Muntinlupa as they filed their COC for the 2022 elections.

He said One Muntinlupa has a “SMART” dream for the city: “Sa Muntinlupa, Aarangkada ang Teknolohiya (In Muntinlupa, technology will have its boost).”

“We seek to promote the use of technology in governance and delivery of services. The modernization of systems will be a priority,” said Biazon, son of former senator Rodolfo Biazon.

Mariñas, who lost in 2019, said he seeks to bring change to the city, as he was able to give help to residents. He was described as “someone who only wants to make the lives of his constituents better.”

Oscar Marmeto, a candidate of the Movement for a People’s Party, and independent Nelson Benjamin will also bid for the city’s highest post in the 2022 elections.

In Las Piñas City, the Aguilars will take the chance to retain their hold of the two highest offices as they filed COC last Oct. 6 at the local election office.

Mayor Imelda Aguilar, wife of the late former local executive Nene Aguilar, and Vice Mayor April Aguilar-Nery are running as candidates of NP. They were endorsed by Mark Villar, who will bid for a Senate seat.

They said they will work to “ensure unhampered social services, environment protection, and good governance.” They will also promote women empowerment and provide free education.

In Malabon City, Councilor Jose Lorenzo Oreta will seek to replace his brother, Mayor Antolin Oreta III, who was threatened with arrest by President Rodrigo Duterte in 2019.

Oreta filed his COC last Oct. 3 with Vice Mayor Bernard Dela Cruz and the Pamilyang Malabonian’s candidates in Malabon’s two districts, saying he would continue the improvements in the city.

Jeannie Sandoval, who lost in 2019 despite the President’s endorsement, will seek the city’s mayoralty post as she filed COC last Oct. 7 as a candidate of NP.

She said she would work for the health, livelihood, housing, and education of the residents. “Let us help each other. This will be the beginning of the city’s recovery,” she said.

Her husband, former Rep. Ricky Sandoval, who also lost in 2019, will bid for Malabon’s lone seat in Congress as a candidate of the PDP-Laban.

In Manila, eight individuals will bid to be the city’s highest official as Mayor Isko Moreno recently filed a COC to seek the presidency.

Honey Lacuna, the vice mayor since 2016, will seek the city’s highest office with 3rd District Rep. Yul Servo Nieto, who will bid for Lacuna’s post in 2022.

They filed COC last Oct. 6 as candidates of Asenso Manileño, a local political movement established in 2005.

Lacuna said she will continue what Moreno has done in Manila while saying she would improve the city’s health services and build a halfway shelter for street dwellers.

Christy Lim, daughter of the late Manila mayor Alfredo Lim, will challenge Lacuna. With her is Lucy Lapinig, a certified public accountant. Lim said they want to continue his father’s legacy.

They filed their COC last Oct. 8 as candidates of the Partido Para sa Demokratikong Reporma (PDRP), a party headed by Sen. Panfilo Lacson who will seek the presidency.

Elmer Jamias, a retired police official, also filed his COC that day to bid for the city’s highest post. He is with Khan Adil Bisnar. They are candidates of PRP.

Like Lacuna, he said he wants to continue what Moreno has done in Manila, including government transparency and the fight against graft and corruption.

In Marikina City, Mayor Marcelino Teodoro will seek to win three years again as local executive of the city that was highly regarded for its COVID-19 response.

Marikina 1st District Rep. Bayani Fernando, however, will challenge Teodoro’s bid, as he filed his COC last Oct. 5, as a candidate of NPC, saying that he wants to improve residents’ lives.

In Makati City, Mayor Abby Binay will seek to retain her hold of the city’s highest office, hoping that she will be able to have three years again as local executive of the premier business district.

Last Oct. 1, her representative, lawyer Jason Certeza, filed her COC at the local election office in Makati City as a candidate of the United Nationalist Alliance (UNA).

Binay previously said she still has a 10-kilometer subway to finish. She also said she wants to see the completion of the second Ospital ng Makati. “There are a lot in the pipeline,” she said.

In Pasay City, the present local executive was challenged as she bids to retain her hold of the city’s highest post, saying that she has “a lot to do for the residents.”

Calixto-Rubiano, sister of former Pasay local executive Antonino Calixto, said she will work for the residents, especially “to improve their lives through provision of jobs.”

Richard Advincula, a former councilor, will challenge Calixto-Rubiano’s bid as he filed his COC last Oct. 7 with lawyer Ernestina Carbajal as candidates of PRP.

Advincula, who also served as a barangay chairman, said he wants to bring change to Pasay City “in the soonest possible time,” saying that residents will not receive “rice with a bad smell.”

The two were challenged by independent Marilyn Chiong, who will bid for the mayoralty post, and NP’s Carlo Santos, who will seek the town’s second highest office.

In Mandaluyong City, former Comelec head Benjamin Abalos Sr., will seek a political comeback as his daughter-in-law, Mayor Menchie Abalos, will bid to be the city’s second highest official.

Last Oct. 6, the two filed their COC to “fulfill” a promise made to Abalos Sr.’s wife, saying that he vowed to spend the remaining years of his life serving residents.

He said he will work to bring Mandaluyong City to its healing and recovery by “creating the perfect balance to protect the public health and revive the economy.”

In San Juan City, Mayor Francis Zamora, who ended the 50-year reign of the Estradas when he won last 2019, will bid to remain as the city’s local executive.

Last Oct. 5, Zamora filed his COC with Vice Mayor Warren Villa and the PDP-Laban candidates in San Juan City, saying he’s “confident and ready” against those who will seek the highest post.

However, Janella Ejercito-Estrada, who lost to Zamora in 2019, said “it is with a calm heart that I’ve decided not to file for candidacy in the 2022 elections.”

She said she needs to help her father, former Sen. Jinggoy Estrada, who recently filed COC to bid for a Senate seat. “I decided to set aside my personal plans for the time being,” she said.

Zamora, son of Rep. Ronaldo Zamora, said he wants to bring San Juan City out of the COVID-19 crisis, saying that he seeks to strengthen public health against the crisis.