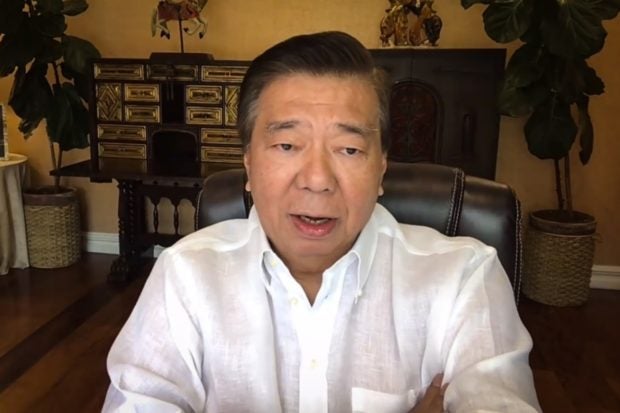 MANILA, Philippines — Senate Minority Leader Franklin Drilon on Wednesday unloaded his frustration over what he said are “erroneous” policies of the government’s pandemic task force, stressing that “something is wrong” with its leadership.

During the budget hearing of the National Economic and Development Authority (NEDA), Drilon said the Filipino public seems to have lost trust in the Inter-Agency Task Force (IATF) for the Management of Emerging Infectious Diseases.

“Hindi ko po talaga maintindihan ang ibang bansa, ganoon din, may mga [I really can’t understand that if other countries also have] restrictions, why were they able to manage better? Something is wrong with our IATF leadership,” the minority leader said.

“I must say your Secretary of Health is a punching bag insofar as the public opinion is concerned because of the issues like Pharmally. Wala pong tiwala ang bayan sa sinasabi ng IATF kaya ganyan. Hindi sumusunod sa patakaran dahilan po walang tiwala and you cannot blame our people for this,” he added.

(I must say your Secretary of Health is a punching bag insofar as the public opinion is concerned because of issues like Pharmally. The public has lost trust in what the IATF is saying. They would opt not to follow the policies and you cannot blame our people for this.)

Health Secretary Francisco Duque was also chairman of the IATF.

Drilon further lamented what he described as a “lack of credibility” on the part of the government.

“I have nowhere else to unload this frustration which I would like to think is shared by many of our people because of the erroneous and not well thought of moves by the IATF. It is always a command and control concept. This is our command and therefore we control,” he said.

“Unfortunately that frustration resulted in thousands having died, millions being unemployed, millions of families being hungry, because of these erroneous moves and policies and lack of credibility on the part of the government.”

Before airing his frustration, Drilon pointed to recent reports that the International Monetary Fund (IMF) has slashed its 2021 growth forecast for the Philippines to 3.2 percent.

He also said that UK-based Oxford Economics earlier ranked the Philippines second to the last among 14 Asia-Pacific regions in terms of attractiveness of foreign investments.

In September, the Philippines was ranked last among 53 countries in a Bloomberg study that measures economies’ resilience to the COVID-19 pandemic, Drilon further pointed out.

“This dire economic forecast that we see today is confirmed by the fact that there are 3.88 million Filipinos in August who lost their jobs, who are jobless,” the minority leader said.

Addressing NEDA Secretary Karl Kendrick Chua, Drilon said he was puzzled as to why the Philippines is supposedly lagging behind in its pandemic recovery compared to other countries.

“We all love our country. We want to see our country move forward but why in Jesus’ name are we in this situation today? Please don’t give me the answer because of the pandemic,” the senator said.

“You know the other countries have fared better insofar as their economy is concerned, their growth rate is concerned. Why do we suffer? Why would our people suffer so much joblessness because of this very poor situation so aptly described by these reports,” he added.

In response, Chua said the economic team has “pushed very hard” in reopening the economy.

“We are seeing light, we are moving away from ECQ (enhanced community quarantine), we have a new [alert] system focusing only the quarantines on a more granular scale,” he added.

“I have also pushed for the reopening of a face-to-face class, we will pilot it next month. A lot of our restrictions, I understand, have been lifted [and] only focusing on 3 Cs (closed, crowded, close-contact establishments),” he further said.

According to Chua, the country is also “constraint” by vaccine supply.

“But the supplies that we have, we have shown that we can inoculate up to 500,000 per day,” he, nevertheless, said.