Tributes pour in from all colors, camps, for ex-president Noynoy Aquino 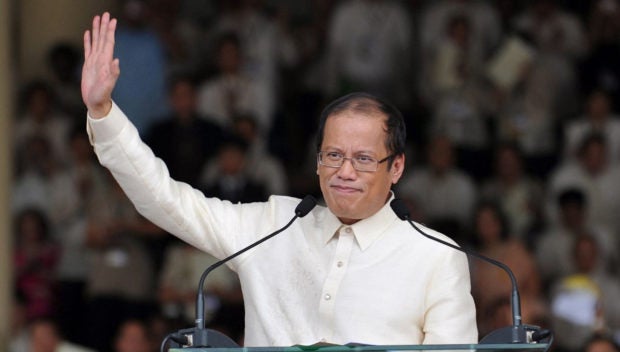 MANILA, Philippines — Politics can be a polarizing issue, but on Thursday, as former president Benigno “Noynoy” Aquino III died due to a lingering illness, rival political camps and parties have offered tributes for the man who once vowed to rid the country of corruption.

Aside from political allies from the Liberal Party and the opposition like Vice President Leni Robredo and other long-time allies like Sorsogon Governor Francis Escudero, personalities who were not aligned with Aquino have paid their respects.

READ: ‘He will be missed:’ Leni Robredo heartbroken over demise of Aquino | Escudero: Fly PH flags at half-mast across Sorsogon for 10 days to mourn Noynoy’s death

Senator Imee Marcos, whose family is considered a bitter rival of the Aquinos, remembered the former chief executive as a “kind and simple soul.”

Former vice president Jejomar Binay, who was the number two man during the administration of Aquino, said that the friendship between their families would not waver even if political differences have kept them apart.

It can be remembered that in the 2016 national elections, Aquino opted to support his running mate in the 2010 elections, former Interior Secretary Mar Roxas, instead of Binay who also ran in the 2016 polls.

“Noynoy and I may have had political differences during the last few years of his term, but that will not diminish the many years of friendship between our families,” Binay said in a tweet.

Both former presidents Joseph Estrada and Gloria Macapagal-Arroyo — who was Aquino’s economics professor at the Ateneo de Manila — also offered condolences to the bereaved family.

Even left-leaning leaders who were generally critical of the past administration extended their sympathies to the bereaved relatives.

“We join the nation in this time of sadness. We had principled differences with the former president, but, we credited and appreciated his administration’s move of filing a case against China in the Permanent Court of Arbitration,” Bayan Muna Rep. Carlos Zarate.

“This case resulted in the historic and precedent-setting July 2016 decision that recognized the country’s sovereign rights in the West Philippine Sea,” he added.

Officials of President Rodrigo Duterte’s administration, who have employed a style of governance that opposes the Aquino government’s brand of leadership, also gave praises for the late leader.

According to Foreign Affairs Secretary Teodoro Locsin Jr., Aquino was not always fond of him, but Locsin still admired him.

“I’m out of Twitter from grief over the death of a sea-green incorruptible, brave under armed attack, wounded in the crossfire, indifferent to power and its trappings, and ruled our country with a puzzling coldness but only because he hid his feelings so well it was thought he had none,” Locsin said in a tweet.

The current Commission on Population and Development (PopCom) also lauded Aquino for staunchly supporting the reproductive health programs, highlighting the signing of the Responsible Parenthood and Reproductive Health Law in 2012.

Early this afternoon, Aquino’s sisters led by Pinky Aquino-Abellada confirmed that the former president died peacefully in his sleep before he was rushed to the Capitol Medical Center.

Aquino-Abellada said that the death certificate pronounced Noynoy dead at 6:30 a.m. due to renal disease, secondary to diabetes.

Aquino was well-known for being the president who was swept into office after Filipinos urged him to ran on the heels of his mother’s death, democracy icon and former president Corazon Aquino.

During his tenure, he was best remembered for instituting anti-corruption policies, supporting reproductive health, and standing up against China’s intrusion in the West Philippine Sea.