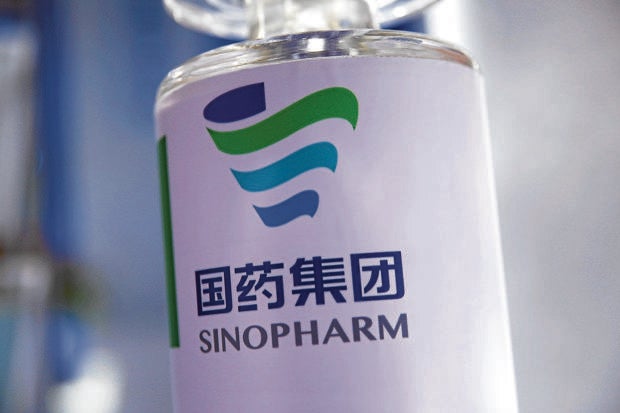 MADE IN CHINA The Beijing Institute of Biological Products claims the Sinopharm vaccine is 79 percent effective. —REUTERS

MANILA, Philippines — Notwithstanding its pending application for emergency use authorization (EUA) from the country’s Food and Drug Administration (FDA), President Rodrigo Duterte gave his ultimate seal of approval for the Chinese coronavirus vaccine produced by Sinopharm when he had himself inoculated Monday night.

A video of Duterte getting his vaccine of choice was released by his longtime aide, Senator Christopher “Bong” Go prior to the President’s public address Monday night. In the video, no less than Health Secretary Francisco Duque III administered the vaccine on the President on the basis of a compassionate special permit (CSP).

Duterte’s inoculation was contrary to an earlier statement by Malacañang which stated that the President will wait for the China-based pharmaceutical group to secure an EUA before receiving its jab. 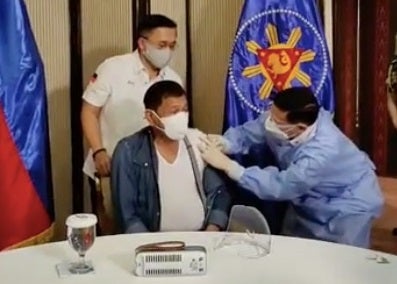 So far, the regulator has granted an EUA to COVID-19 vaccines developed and produced by six pharmaceutical groups including Pfizer-BioNTech, AstraZeneca, Sinovac, Gamaleya Research Institute, Johnson & Johnson, and Bharat Biotech.

Presidential spokesperson Harry Roque previously said that the Palace will no longer seek inclusion of the President in the compassionate use license of Sinopharm issued to the Presidential Security Group (PSG) by the FDA.

The company has also tested a similar vaccine developed by the Wuhan Institute of Biological Products.

Below is the side-by-side comparison of Beijing-Sinopharm’s BBIP-CorV vaccine and Wuhan-Sinopharm vaccine based on data from the COVID-19 vaccine tracker by the Vaccine Centre at the London School of Hygiene & Tropical Medicine.

How does it work?

Similar to Sinovac’s CoronaVac and Bharat Biotech’s Covaxin, the vaccines developed by Sinopharm in Beijing and Wuhan also use inactivated virus to make antibodies against SARS-CoV-2 – the virus that causes COVID-19.

According to the McGill University Interdisciplinary Initiative in Infection and Immunity (MI4), these inactivated pathogens are grown in culture and killed in laboratories to reduce their virulence or the ability to infect and cause damage to a host.

Since the viruses in the vaccine are already dead, they can be injected into a person without causing COVID-19.

Inactivated viruses, which do not have the ability to replicate themselves, are also being used in polio and influenza vaccines. It also stands as the bases for vaccines against other diseases such as rabies and hepatitis A.

Sinopharm reported in December last year that the vaccine developed by its Beijing unit was 79.34 percent effective at protecting people from COVID-19.

According to the company, this is based on an interim analysis of the vaccine’s Phase 3 clinical trials. It is, however, lower than the 86 percent efficacy rate earlier announced by UAE based on preliminary data from trials there.

On the other hand, Sinopharm’s Wuhan unit in February said that its vaccine had shown an efficacy rate of 72.51 percent against COVID-19 based on an interim analysis of its Phase 3 clinical trials.

Data from the World Health Organization’s (WHO) COVID-19 vaccine landscape and tracker as of April 30 showed that the vaccine by Sinopharm’s Beijing unit is currently at Phase 4 clinical trial while the vaccine produced by the Wuhan unit is still at Phase 3.

There are four trials registered for the Phase 3 clinical trials of Sinopharm-Beijing’s BBIBP-CorV. These trials are located in Bahrain, Egypt, Jordan, UAE, Peru, and Argentina.

Meanwhile, data from ClinicalTrials.gov – a website maintained by the US  National Library of Medicine (NLM) at the National Institutes of Health (NIH) – bared that the Phase 4 trial for BBIBP-CorV has not yet started.

The Phase 3 trials for Wuhan’s vaccine, on the other hand, are likewise located in Bahrain, Egypt, Jordan, UAE, Peru, including Morocco.

In terms of vaccine approval, Beijing’s BBIBP-CorV has been so far approved for full or emergency use in at least 40 countries.

The Chinese government in February announced the approval of Wuhan’s COVID-19 for vaccine use while UAE has issued an EUA for the vaccine.

During a televised speech last December 26, Duterte said several military personnel were already inoculated with a vaccine against COVID-19 developed by China’s Sinopharm.

Both Interior and Local Government Secretary Eduardo Año and AFP spokesperson Maj. Gen. Edgard Arevalo then confirmed that that the Presidential Security Group (PSG) has received jabs of the Sinopharm vaccine.

Commander Brig. Gen. Jesus Durante III further said that some of the PSG’s personnel have already been vaccinated against COVID-19 as early as September, despite the non-issuance of an EUA or compassionate use authorization.

Amid fierce criticisms from lawmakers and several groups, Malacañang explained there was no violation of the anti-graft law when PSG received the vaccines because these were only “tokens” and no public funds were used for it.

In December, 2020, Justice Secretary Menardo Guevarra said he had ordered an investigation into the use of Sinopharm to inoculate presidential guards for COVID-19 as it might have violated several laws, contrary to administration officials’ claims that it was not unlawful.

Guevarra said he had directed the National Bureau of Investigation to look into the use of the vaccine developed by the Chinese pharmaceutical company Sinopharm and how it was brought into the Philippines, and unauthorized inoculation on military troops.

In January, 2021, the AFP called off its own investigation on PSG’s use of unauthorized Chinese coronavirus vaccines.

That same month, the Senate said it will proceed with an inquiry into the government’s vaccination program despite Duterte’s threat of a “crisis” if the senators insist on questioning the PSG’s inoculation with Sinopharm.

In February, FDA issued a compassionate use license for 10,000 doses of China-based Sinopharm’s COVID-19 vaccine.

The compassionate use license allows the PSG to get access to unregistered vaccines sans an EUA from the FDA, which is required before a vaccine can be administered legally in the country.

Meanwhile, both the FDA and the Department of Health (DOH) vowed to probe the vaccination of President Rodrigo Duterte’s former special envoy to China Mon Tulfo using smuggled vaccines from Sinopharm.

Tulfo had admitted to using the vaccine, further saying that he would quit his post should he be appointed by Sinopharm as its distributor in the country.

Last month, vaccine czar Carlito Galvez Jr. said that UAE is planning to donate 500,000 doses of the Sinopharm vaccine to the Philippines.

As to what would happen to these government investigations on the use of Sinopharm is unknown after Duterte’s endorsement of the locally unregistered vaccine.