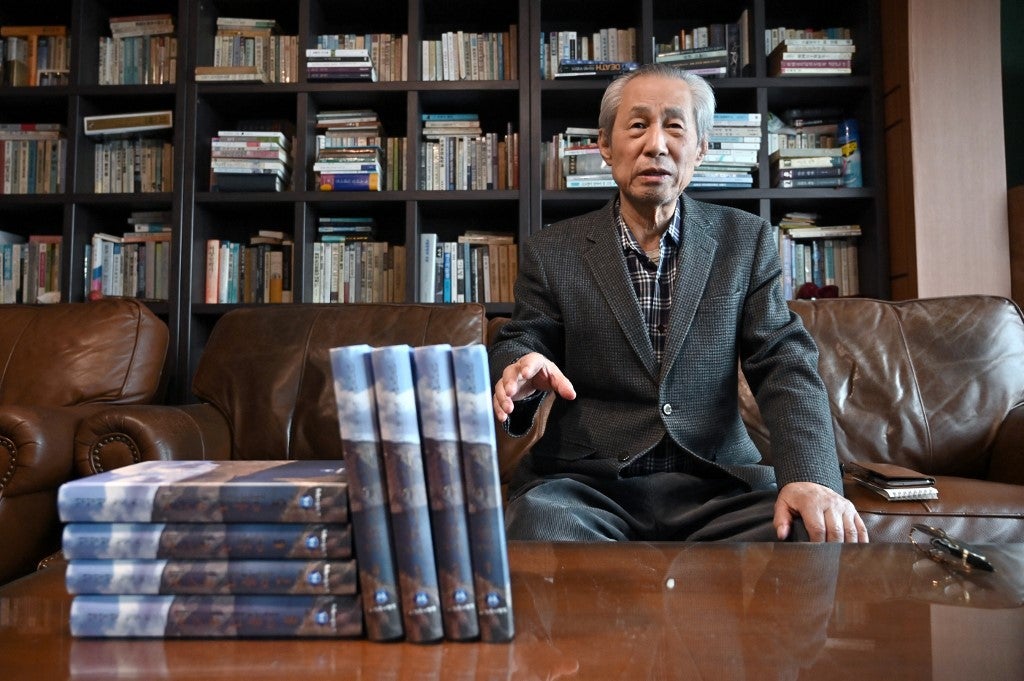 This picture taken on April 30, 2021 shows South Korean publisher Kim Seung-kyun speaking during an interview with AFP at his home in Goyang with the eight-volume memoirs of North Korea’s founder Kim Il Sung, titled “With the Century”, displayed on the table.  (Photo by Jung Yeon-je/AFP)

Critics of the measure say Southerners are politically mature enough to judge such material for themselves and argue it amounts to unnecessary censorship in a vibrant democracy that is one of the most wired and educated countries in the world.

But the South remains officially at war with its nuclear-armed and impoverished neighbor, with legislation to match.

The national security law dates from 1948, before the outbreak of the Korean War, and still blocks ordinary citizens from accessing most North Korean-produced content, including its official Rodong Sinmun newspaper.

Reproducing or possessing banned pro-Pyongyang materials is punishable by up to seven years in prison.

Even so publisher Kim Seung-kyun in April released the North Korean founder’s eight-volume memoirs, titled “With the Century”, telling AFP he did so to promote inter-Korean reconciliation.

An anti-North civic group filed a criminal complaint, police launched an investigation and within days the country’s major bookstores — who had received it via a publishers’ association — pulled it from their shelves.

It briefly remained available online for 280,000 won ($250) for the full set, but by last week it was no longer available from popular web portal Naver, while searches on local bookselling platforms Kyobo and Yes24 showed no results.

The moves triggered a debate over censorship and whether people really needed to be protected from reading the words of Kim Il Sung.

“South Koreans already have a high level of judgement,” said Ha Tae-keung, a lawmaker from the conservative People Power Party — who was jailed under the national security law as a student activist.

“No one is going to be deceived by a fantasy-like memoir of Kim Il Sung anymore,” he told AFP. “We now need to actively guarantee freedom of expression.”

Kim Il Sung, the grandfather of the North’s current leader Kim Jong Un, ruled the world’s most reclusive country for nearly five decades until his death in 1994, with a mixture of his own brand of Stalinism and an unabashed personality cult.

The memoir, first published by Pyongyang in 1992 and available in around 20 languages around the world, portrays him as a heroic Korean guerilla leader against Japanese colonial forces, often denying and downplaying his Chinese and Soviet connections.

Researchers describe it as largely a “work of fiction” with archival Soviet evidence disproving some of its key claims, but add that it has value regardless of historical inaccuracies.

Despite its “mind-numbing prose”, the book revealed Pyongyang’s “propensity to falsehoods” and “cult of personality”, said Sung-yoon Lee, a Korean studies professor at Tufts University in the United States.

Suzy Kim, a Korean history professor at Rutgers University, said it demonstrated how the regime in Pyongyang “traces its legitimacy to its anticolonial roots”.

To this day, she added, many of the North’s challenges are “often justified as sacrifices made for standing up to continued imperialist policies imposed by the Japanese and US governments”.

The national security law technically makes mere possession of pro-North materials punishable by up to seven years in prison — while visiting the country without government permission has a maximum 10 year sentence.

The United Nations has said the act poses a “seriously problematic” challenge to freedom of expression in the South, and the US State department regularly criticises it in its annual human rights reports.

Thousands were imprisoned under the legislation by the authoritarian military governments that ruled the South for decades, often accused of engaging in pro-Pyongyang activities or spying for the North.

Publisher Kim — who originally obtained the text several years ago for a government-authorized restricted distribution to research institutions — said he had no intention of benefitting Pyongyang.

Releasing the text was “a way to love my country” by promoting inter-Korean understanding, the 82-year-old told AFP at his home in Goyang.

“If that is deemed a crime, I am willing to be punished.”

Police confirmed to AFP that their investigation into whether Kim had violated the national security law was continuing.

New Paradigm of Korea, the group that filed the complaint, insisted that the general public was susceptible to “totalitarian propaganda manipulation”.

Allowing the book’s distribution would be “comparable to handing a nuclear bag to the enemy on a spiritual level”, it added.

But Professor Lee said: “Let the publisher and consumer act freely and allow the market, including the market of ideas, determine the book’s fate.

“The freedom of speech, even false and outrageous speech that beautifies the despicable, should be protected in a genuine democracy.”