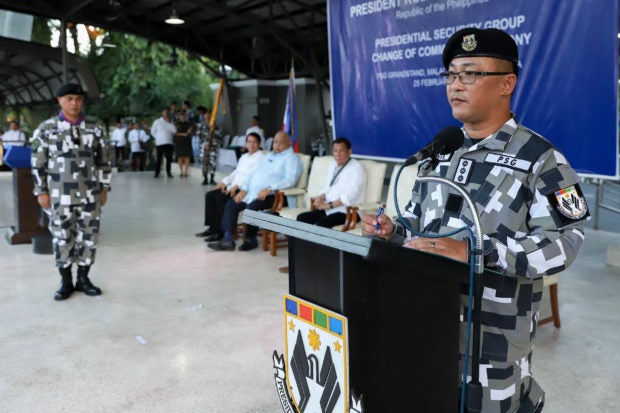 MANILA, Philippines — The Presidential Security Group (PSG) did not ask President Rodrigo Duterte’s permission for the vaccination of some of its personnel against COVID-19 that happened as early as September, its Commander Brig. Gen. Jesus Durante III said Wednesday.

“We didn’t ask permission. So we just informed him about it after all of the close-in security was vaccinated,” Durante said in an interview over ABS-CBN News Channel when asked if they sought Duterte’s permission in vaccinating their personnel.

Durante disclosed that the PSG personnel, with the help of their medical team, administered the vaccines among themselves.

The close-in security personnel who were inoculated already received two doses of the vaccine, he also said.

“For those vaccinated, yes,” Durante said when asked if two doses were already administered to the PSG personnel. “Since October. Started actually September and the last batch was October.”

“Everybody is aware actually that most countries have acquired vaccines. Some of them are developing. That was one of our bases. So we came up with that based on the experience of other nations. We did some research about it,” he added.

Despite fierce criticisms from lawmakers and several groups, Malacañang said there was no violation of the anti-graft law when PSG received the vaccines because these were only “tokens” and no public funds were used for it.

Neither Malacañang or PSG, however, disclosed where the vaccines came from but said that these were “donated.”

Read Next
LRT-2’s Rizal Day treat: Free ride from 5 p.m. to 7 p.m.
EDITORS' PICK
What Went Before: Deal bars police, military ops from UP campuses
Duterte will get COVID-19 vaccine shot in private
New Year, New Rediscoveries
Experience clearer calls nationwide with Smart VoLTE
Is your company a growth champion? Stand up and be recognized!
UP community slams scrapping of DND pact
MOST READ
Proposed toll for newly opened Skyway 3 ranges from P110 to P274
‘Hotbed of recruitment’: Lacson backs termination of UP-DND accord
UP community slams scrapping of DND pact
Public has legal basis to demand disclosure of COVID-19 vaccine prices
Don't miss out on the latest news and information.