Batch 2020: How Filipino college graduates job-hunted through the pandemic 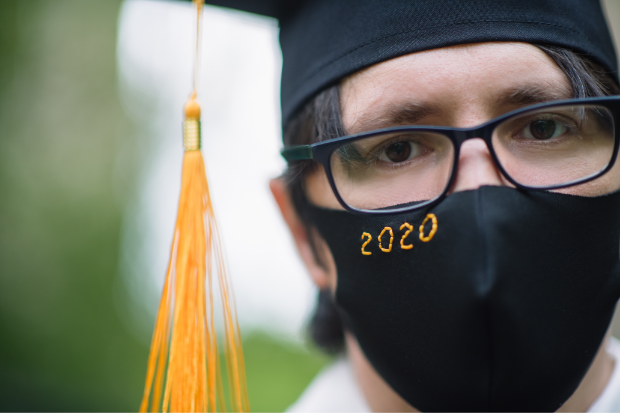 Uncertainty. This is what recent college graduates are up against in the shadow of the pandemic. Any expectations of marching across the stage in academic regalia have been dashed as the spread of COVID-19 plunged the country in quarantine and pushed schools to suspend graduation ceremonies, or hold them virtually.

But this was only the beginning.

The Philippines now holds the undesirable title of having the world’s longest lockdown. The year is nearing its end, and for many college graduates, this has been a period of upended plans and tested hopes.

Jay Ramirez, 21, graduated from De La Salle Lipa last June with a Bachelor’s degree in Information Technology. He has been looking for a job since, scouring listing sites for work related to his course.

He doesn’t remember how many companies he’s applied to exactly, saying it may be more than twenty. He isn’t even sure if companies are actually reading his applications, since he only receives generated e-mail replies.

He isn’t alone in this predicament since his batch mates are also looking for jobs. They talk about which companies they’ve applied to and try their luck by sending applications to the same places.

If the pandemic did not happen, Ramirez believes he would probably be already working right now. This was what he wanted for himself.

Alex Ilagan, 22, doesn’t keep count of the companies she applied to during the pandemic, but she’s certain they’re a lot. She graduated from the University of Santo Tomas last June with a Bachelor of Fine Arts degree and has been looking for jobs related to her course, like graphic design or illustration.

She already expected companies won’t be able to respond immediately, so she sends as many applications as she can for jobs she thinks she can handle.

“I have always been concerned about employment…” she said. “I’m worried about not being able to find a job because of the growing pressure and competition. The fact that businesses have been shutting down does not help either.”

To keep herself preoccupied, she started taking art commissions online. 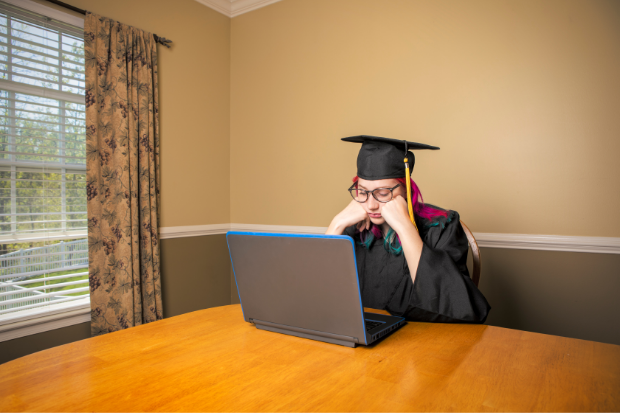 Ariadne “Ayen” Bascos, 22, has been in Abu Dhabi, United Arab Emirates, since the last week of December 2019. She initially came there to see her parents who are overseas Filipino workers, but what should’ve been a short vacation turned into a year-long stay as travel restrictions came into place.

Bascos finished a Bachelor of Science in Accountancy at San Beda University in December 2019. Their graduation ceremony was supposed to be held last May, but didn’t push through due to COVID-19.

She was looking forward to taking and passing the board exam and landing her first job, but these have been delayed by the pandemic. Her family was also supposed to come home for her graduation and the Christmas season, but this plan has also been scrapped.

Although her focus is on her online review for the board exam, she searches for jobs every now and then, even though it isn’t her priority.

“Some of the companies I’ve applied to gave me an interview. It’s hard to get an offer, especially here in UAE, since they are looking for someone who has a license and/or experience. Since I’m a fresh graduate, I don’t have either,” she said.

Meanwhile, Ciara Declaro, 22, started looking for jobs around April, two months before she and her batchmates submitted all of their requirements in June for graduating students.

Declaro finished a Bachelor of Science degree in Computer Engineering from the Eulogio “Amang” Rodriguez Institute of Science and Technology. They only had their virtual graduation this December due to COVID-19.

Declaro also struggled with finding a job during the pandemic, sharing that companies preferred those with experience because it’s difficult to train fresh graduates virtually. According to her, places usually looking for experienced workers were banks and well-known companies in Makati and Bonifacio Global City.

Undaunted, she’d go on job listing sites to apply to all sorts of companies. It didn’t matter to her if the listing called for someone with experience — she clicked “apply” and sent her applications anyway.

“I just want to have experience and I’m afraid to forget what I’ve learned [in] school and my OJT. I want to help my family [with] our debt because of [the] pandemic,” she said.

Declaro’s persistence eventually paid off and she was hired by an e-commerce company in San Juan as a quality assurance and data analyst. She started her first day on Nov. 30. 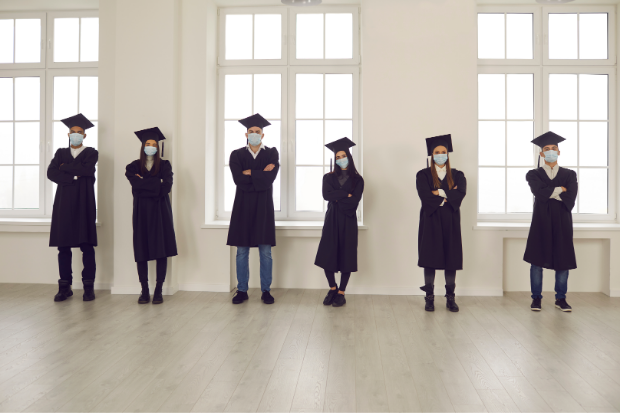 Unemployment and the state of the job market

There are no official government figures yet as to how many students graduated from college for the 2019 to 2020 acadmeic year. INQUIRER.net reached out to the Commission of Higher Education’s Office of Planning, Research and Knowledge Management, but was told the Commission would not have the complete data until the end of 2020 or early 2021.

In the academic year 2018 to 2019, students who received a baccalaureate from both public and private institutions were 718,880, according to CHED as of Oct. 8.

October had the lowest unemployment rate at approximately 8.7% or 3.8 million Filipinos who are 15 years old and above, as per the latest preliminary results of the Philippine Statistics Authority’s quarterly Labor Force Survey on Dec. 3.

From the 3.8 million unemployed, 34.7% belong to the youth sector or those aged 15 to 24. Going by educational attainment, 23.9% of the unemployed are college graduates, while 26.4% are junior high school graduates.

Business process outsourcing (BPO), information communications technology, manufacturing, finance, sales, retail and health care, topped the list when it came to industries with the highest number of vacancies during the pandemic, as per the Department of Labor and Employment’s Bureau of Local Employment. BLE, in response to INQUIRER.net, cited its JobsFit COVID-19 Labor Market Information report. 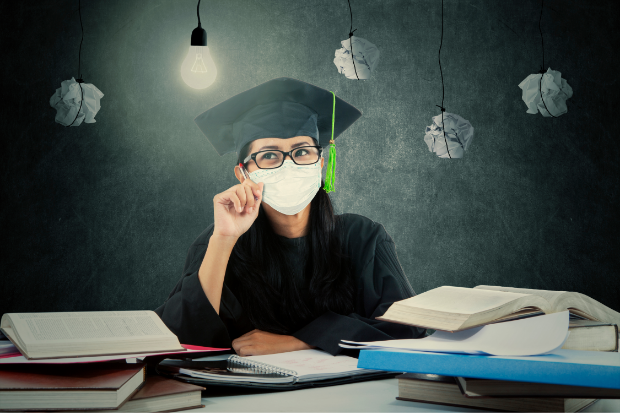 On keeping the hope alive, despite pressures and anxiety

“It’s honestly getting to me… I still feel the pressure of having to land a job as soon as I can since I don’t want to feel like a burden,” Ilagan shared. “I find myself comparing my progress to others who seem to have secured their pace even with the things going on.”

Her parents have been understanding, but there are moments when the guilt is just hard to shake off.

“At random times I just end up apologizing that I still haven’t gotten an actual office job, out of guilt. That aside, I’m not usually vocal about my sentiments but they’re very encouraging and aren’t necessarily rushing me to do things,” she said.

Ramirez, meanwhile, shared that his parents have been telling him to look for work. He also thought about what he’d do differently if he could go back to 2019.

“Sana po naghanap na lang ako ng stable na sideline. Hanap na agad ng pag-o-OJT-han na maaabsorb ako dun. Sana,” he said. (I wish I looked for a stable sideline then and immediately looked for a place to have my OJT where I’d be absorbed. How I wish).

Declaro, on the other hand, often reminds herself to focus on her goals, whatever the situation. As for Bascos, she tries not to worry about things beyond her control, although she professed that what makes her anxious at times are the things she left undone at home.

“I think what triggers this feeling is I could’ve accomplished those things if I wasn’t so eager to have my vacation as early as possible,” said Bascos.

And although her parents also help her look for jobs, passing the board exam remains her main goal: “They agree and support me. They keep saying God has better plans.”

2020 indeed has been a year of losses — of lives, of homes, of jobs, of normalcy and comfort. For these four graduates, and many more, it’s a moment none too easy as they confront their future in the most precarious of times.

But much hope still remains for what comes after: possibility. A new year, and perhaps, one that is better than this.

“I hope the pandemic would eventually subside and conditions would improve,” said Ilagan. “I hope it will give way for people to restore or build something new from what they lost.” JB

Two nurses, a carpenter, and those they left behind: Families of fallen frontliners cope, still need support

Caring for Lola Linda at home: Dementia amid the COVID-19 pandemic