MANILA, Philippines — The country reached an undesirable milestone when its total COVID-19 cases topped 300,000 on Saturday, nearly eight months to the day since the country recorded its first infection in a visiting Chinese woman.

With 2,747 new infections, the national total rose to 301,256, a reminder of how the government is still grappling with how to stem the spread of the new coronavirus virus that causes the severe respiratory disease.

Despite the world’s longest lockdown, the country has not significantly reduced the number of new COVID-19 cases.

In the World Health Organization’s (WHO) 22-member Western Pacific region, it is only the Philippines that continues to report cases in the thousands daily.

Among the Philippines’ partners in the Association of Southeast Asian Nations, Indonesia is the only other country seeing high numbers of infections.

The Department of Health (DOH) says comparing countries’ successes or failures in dealing with the pandemic should account for their varying health systems, resources and populations.

But in an interconnected world, critics say they cannot be faulted for making comparisons, seeing other countries proving to be more capable in handling the pandemic.

At the onset, the DOH was unable to find even half of the 1,195 persons who possibly came in contact with the three Chinese tourists from Wuhan who were the first reported cases in the country.

When the first local case was confirmed on March 7, health offiials could not explain how and where that elderly man who frequented Greenhills in San Juan got the virus.

The outbreak accelerated rapidly. By the end of March, 2,084 were infected.

Infectious disease expert Dr. Rontgene Solante said the authorities lost the best and earliest opportunity to catch those who had the virus before they turned into severe cases or infected others at the time when majority of the population was locked down.

People with mild symptoms should have also been tested as it was then easier to trace those with whom they had come into contact.

Health Undersecretary Maria Rosario Vergeire admitted the “efforts [at that time] were not enough.”

“So now we are strengthening that,” she said.

It was only in August that active case finding became a high priority under the Coordinated Operations to Defeat Epidemic (CODE) strategy. CODE provides a stronger support to cities and municipalities which have big numbers of cases or clusters but fewer resources like health personnel and quarantines.

The strategy is one of the “more efficient ways for localized lockdowns to work” to avoid going back to strict quarantine, Vergeire said. 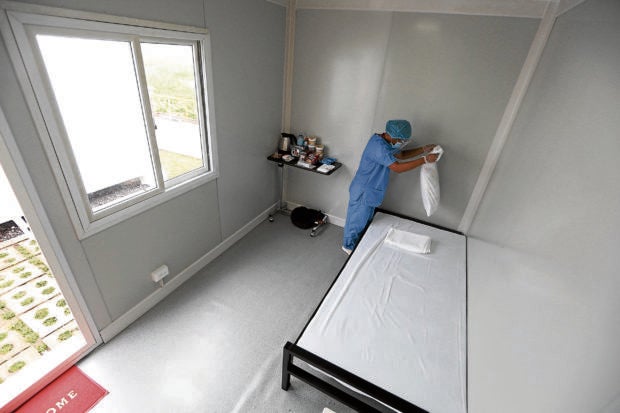 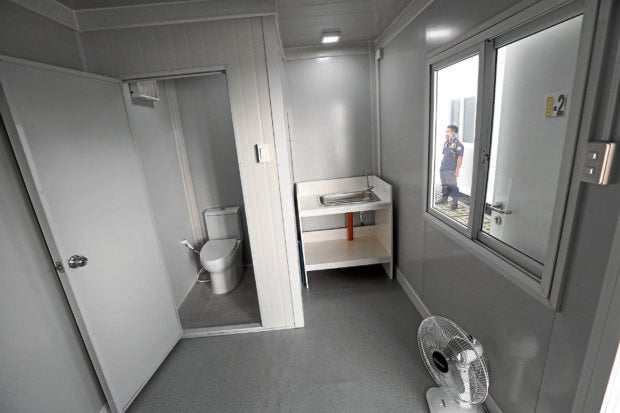 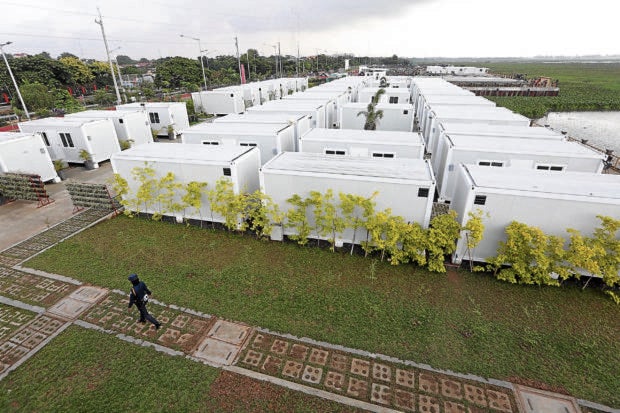 COVID CONTAINERS Taguig City opened on Saturday a quarantine made of several shipping containers fitted with beds, air conditioners and toilets. A molecular laboratory and a testing facility were also set up near the site. —NIÑO JESUS ORBETA

When Metro Manila came under the less strict general community quarantine on June 1, it had over 18,000 cases. The number more than doubled to 37,000 by the end of the month.

During that period, the rate of critical care utilization, or the use of hospital wards, isolation areas, intensive care unit beds and mechanical ventilators for COVID-19 patients, particularly in Metro Manila, peaked at 81 percent. Currently, it is down to 54 percent.

But Vergeire warned against complacency whenever the health system showed improvements.

“The virus is still here,” she said during Saturday’s Laging Handa briefing. “Let us remain vigilant. We must always be aware and conscious.”

The Philippine College of Physicians (PCP) also reminded the public to cooperate and follow health protocols. Controlling the spread of the disease isn’t the responsibility solely of the authorities, it said.

“We cannot be complacent because if we do we may see another peak or surge of COVID-19 cases. The fight is not yet over,” said Dr. Maricar Limpin, PCP vice president.

She urged the public to continue wearing masks and face shields, handwashing and maintaining physical distance of about 2 meters as they were very effective preventive measures.

Medical experts and scientists also are continuing to insist that their voices be heard as the health crisis persists.

In a statement last week ahead of the opening of the United Nations General Assembly, the Lancet COVID-19 Commission stressed the need for governments to listen to the medical community to effectively control the spread of the virus.

At odds with science

“All countries should combat decisions based on rumormongering and misinformation,” the statement said. “Leaders should desist from expressing personal viewpoints that are at odds with science.”

The commission was launched in July to assist government, civil society and the UN institutions to respond to the pandemic. The Lancet is a renowned medical journal founded in 1823.

In the country, the Healthcare Professional Alliance Against COVID-19 said various government task forces were now more frequently seeking advice from health experts on key policies and how to improve the responses to the pandemic.

“We are very thankful that that’s happening. That the voice of science is being heard,” said Dr. Antonio Dans, spokesperson for the coalition of more than 160 medical societies.

The rise in the number of infections due to continued community transmission mainly attributable to the failure to strictly follow the prescribed health measures is reflected in the increased capacity of the country to conduct tests for the new coronavirus.

From just one at the beginning of the pandemic, there are now 134 laboratories able to do more than 30,000 tests daily. The DOH reported that as of Friday, 3,383,141 individuals had been tested for the virus.

The additional cases reported on Saturday show an apparent slowdown in new infections. There were only three times in September when daily cases went beyond 4,000. There has been an average of 3,169 cases daily this month.

The recovery of 787 patients raised the number of survivors to 232,906. However, the death toll rose to 5,284 after 88 patients succumbed to the disease.

The recoveries and deaths leave the country with 63,066 active cases.