Senate probe into COVID-19 vaccines still on despite Duterte threat 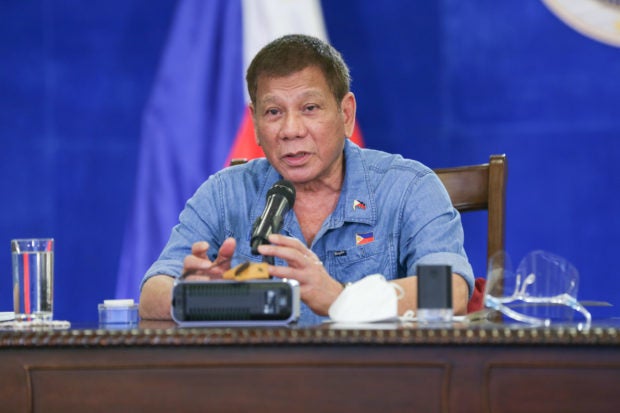 MANILA, Philippines — The Senate will proceed with an inquiry into the government’s vaccination program despite President Rodrigo Duterte’s threat of a “crisis” if the senators insist on questioning his military bodyguards about their inoculation with a candidate vaccine for COVID-19 that is not yet approved by the Food and Drug Administration (FDA).

The FDA, National Bureau of Investigation and Bureau of Customs are also proceeding with their investigation of the illegal entry into the Philippines of the vaccine developed by the Chinese pharmaceutical company Sinopharm and its unauthorized use to inoculate troops from the Presidential Security Group (PSG).

But the Armed Forces of the Philippines called off its investigation that had been scheduled to open on Tuesday after Duterte, in a televised address to the nation late on Monday, ordered the PSG commander, Brig. Gen. Jesus Durante III, not to obey summons from the Senate.

“Although it was not directly directed at the AFP, we take [our] cue from that because he is the Commander in Chief of all armed forces,” Maj. Gen. Edgard Arevalo, the military spokesperson, said in announcing on Tuesday the halt to the investigation ordered by the chief of staff, Gen. Gilbert Gapay.

The PSG is a military unit but its operations are overseen by the Office of the President.

Dec. 26, but the FDA said it had not authorized any COVID-19 vaccine for use in the Philippines.

Senators’ talk about an inquiry apparently angered the President, who warned the lawmakers in his address late Monday against citing PSG officials for contempt.

“I will not allow it. I will go to Congress and get them … If you do that, there will be a little crisis. It’s in your hands. I’m prepared to defend my soldier[s]. I will not allow them for all their good intentions to be brutalized in a hearing,” Duterte said.

Although dismayed at Duterte’s assertion of executive privilege, the senators said the committee of the whole’s inquiry into the government’s vaccination program would proceed even without the PSG.

“Who in heaven’s name told him I’m calling the PSG?” Senate President Vicente Sotto III, chair of the committee of the whole, said. “I think the President is being misled.”

Sotto explained that the subject of the inquiry is “the road map for the P72.5 billion” approved by Congress for the purchase of COVID-19 vaccines. Any other topic, including the PSG vaccinations, may be tackled in a separate hearing, he said.

Senate Minority Leader Franklin Drilon acknowledged the legality of Duterte’s assertion of executive privilege, provided for under Executive Order No. 464, issued in 2005 by then-President Gloria Macapagal-Arroyo, requiring heads of executive departments to secure presidential permission before appearing in any congressional investigation.

Drilon, however, said there was no need to invite Durante to the inquiry, as the Senate could call other sources of information.

“[T]here is no preventing Congress from eliciting information in aid of legislation from other resource persons,” he said in a statement. “The Senate should continue with the hearing, especially in the light of the revelation that 100,000 [Chinese online gambling] workers [in the country have been] inoculated.”

Chinese-Filipino community leader Teresita Ang See disclosed the vaccinations in a news conference in Manila on Monday. She did not name the source of the unauthorized vaccine, but said it was the same as the source of the vaccine given to the PSG. (See related story on Page A3.)“The Senate must exercise its mandate to look deeply into the issue in order to plug the loopholes in the law granting authority to the [FDA],” Drilon said.

In separate statements, other senators said the inquiry would proceed despite Duterte’s threat.

Sen. Richard Gordon, head of the blue ribbon committee, said the President’s “shot [across the Senate’s] bow” was a “wrong thing [for him] to do.”

The PSG vaccinations became a controversy because Duterte was not being transparent, he said.

He urged the leaders of the executive and legislative branches to call a meeting to settle the controversy “without much constitutional bombardment.”

Sen. Panfilo Lacson, chair of the national defense committee, said the Senate had the power to conduct the inquiry, which could not be stopped by a coequal branch of government.

Malacañang, Lacson said, “should not also interfere [in] the mandate of Congress to call on resource persons to shed light on some issues.”

Lacson said the focus of the Senate inquiry should not be shifted so that the public would forget who should be held accountable for the missed opportunity to procure vaccines early, a reference to Foreign Secretary Teodoro Locsin Jr.’s disclosure in December that the Philippines missed out on 10 million doses of the Pfizer COVID-19 vaccine that were supposed to be delivered this month because “somebody dropped the ball” by sitting on the confidentiality disclosure agreement required by the US drug maker.

Earlier on Tuesday, retired Supreme Court Senior Associate Justice Antonio Carpio said it would be “embarrassing” for the Senate to drop the investigation after Duterte’s remarks.

“They are an independent body. The Senate should proceed with the investigation and subpoena the PSG … They have to appear if they are subpoenaed,” Carpio told the Inquirer in a phone interview.

Asked if he was surprised at how Malacañang tried to justify the use of an unapproved vaccine to inoculate the presidential guards, Carpio said: “I’m not surprised with their reaction. I will be surprised if the Senate will back out. That will be the big surprise there.”

Carpio said the Senate inquiry should proceed because “it’s bad enough that the vaccine was imported and administered without permits.”

“If they (the Senate) backpedal from the investigation, then there will really be a cover-up,” he said.

The Makabayan bloc in the House of Representatives has filed a resolution for an inquiry into the use of the unauthorized vaccine by the presidential guards.

A member of the bloc, Gabriela Women’s Party Rep. Arlene Brosas said self-preservation, which was invoked by President Duterte in telling the Senate not to “tinker” with the PSG, “is not and should never be an excuse for the blatant disregard of existing laws and of the clamor for full disclosure of the government’s vaccination program.”

“It’s just a matter of due recognition and mutual respect between and among the three branches of government for our brand of democracy to work,” Paduano said in a statement on Tuesday.

In the Palace, Duterte’s spokesperson Roque said the President’s directive to the PSG was not a gag order.

“The President invokes executive privilege, which is in the Constitution, in prohibiting the PSG from appearing in the Senate. But there are a lot of other investigations,” Roque said, citing the FDA and NBI inquiries.

The executive agencies looking into the PSG vaccinations can proceed with their investigation, he said.

“The hearings of the executive can continue and, of course, we expect the PSG to appear and cooperate,” Roque said.

Justice Secretary Menardo Guevarra, who had directed the NBI to investigate, on Tuesday said the investigation would proceed as planned.

“The focus of the investigation is the alleged proliferation of unregistered vaccines against COVID-19 in the so-called black market and their unauthorized administration,” Guevarra told reporters.

NBI spokesperson Ferdinand Lavin said investigators had sent letters to the FDA inquiring about the status of candidate vaccines.

The NBI, he added, will also send similar communication to the PSG and the military.

“If they refuse to cooperate, we will still proceed with the investigation. We will build up the case based on independent evidence,” Lavin said.