Panelo to Cardema: We have nothing to do with your tiff with Guanzon | Inquirer News

Panelo to Cardema: We have nothing to do with your tiff with Guanzon 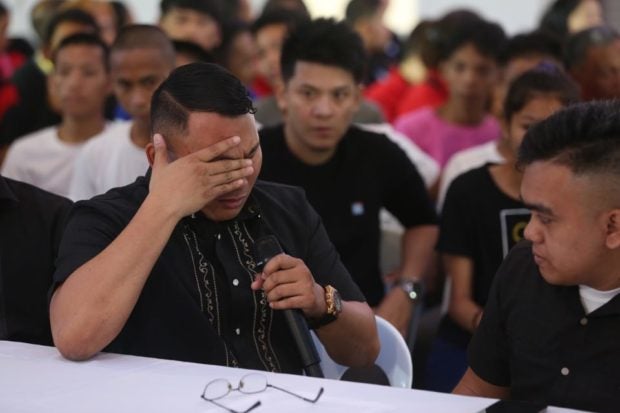 Ronald Cardema became emotional during the press conference, saying that his wife and his father are in the hospital. Cardema slammed Commission on Elections (Comelec) Commissioner Rowena Guanzon for “playing the victim,” saying that the members of the Duterte Youth party-list group were the real victims. (Photo by CONSUELO MARQUEZ / INQUIRER.net)

“We will never intrude into anything that does not concern the Palace. That’s between him and Commissioner Guanzon,” he added.

In a press conference on Saturday, Cardema appealed to President Rodrigo Duterte and the Supreme Court (SC) to probe Guanzon’s alleged extortion against him.

Cardema, who was disqualified from being the nominee for Duterte Youth Party-list, claimed that Guanzon got an emissary to ask him for favors in exchange for the approval of the accreditation of the party-list group in time for the May 2019 polls.

[We are asking the President for help. At this level when we are really crushed, maybe we can ask help from the President.[

Panelo said Cardema should instead file a corruption charge against Guanzon instead of “dragging” the Palace into it.

“Kung meron siyang corruption charge edi mag-demanda siya. He doesn’t have to go and use media about it. Mag-file siya ng kaso. Why does he have to drag the Palace to it?” Panelo said.

READ: Guanzon to Cardema: ‘Study your case, get a good lawyer’