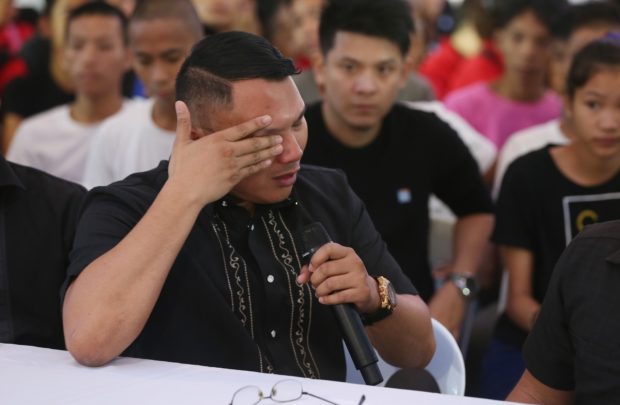 TEARS FOR FEARS Duterte Youth first nominee Ronald Cardema cries before the media on Saturday as he describes his party list as “the victim” in Comelec Commissioner Rowena Guanzon’s alleged demand for favors in exchange for the party’s registration in January. —NIÑO JESUS ORBETA

MANILA, Philippines — He and his party mates are “the victims” here, Duterte Youth party list nominee Ronald Cardema said on Saturday as he claimed that Elections Commissioner Rowena Guanzon, through an emissary, had asked favors from him in exchange for the party’s accreditation in January.

Cardema was apparently responding to Guanzon’s recent claims that she had been receiving death threats from his camp after the Commission on Elections (Comelec) First Division canceled his nomination as Duterte Youth representative on Aug. 5 for “material misrepresentation” of his age.

The law requires youth sector nominees to be 25 to 30 years old on Election Day. Cardema is 34.

At the press conference, Cardema alleged that aside from demanding P2 million from the party list, Guanzon had asked for the appointment of a lawyer as a regional trial court judge in Iloilo, and of another individual as public works regional director in Negros.

The former National Youth Commission (NYC) official also claimed that Guanzon’s emissary had said that the commissioner would sign the accreditation papers of Duterte Youth should he meet the requests.

He agreed to the terms even though the party list no longer needed Guanzon’s signature, Cardema said. “We wouldn’t go against one of Guanzon’s people. So we just said yes,” he added.

‘Is he the President?’

Addressing Guanzon, Cardema said: “What we are trying to tell you is that you should issue our certificate of proclamation. Release it, Commissioner Guanzon. We [have] earned our seat in Congress.”

Reached for comment, Guanzon said the Duterte Youth nominee was only after “publicity and public sympathy.” 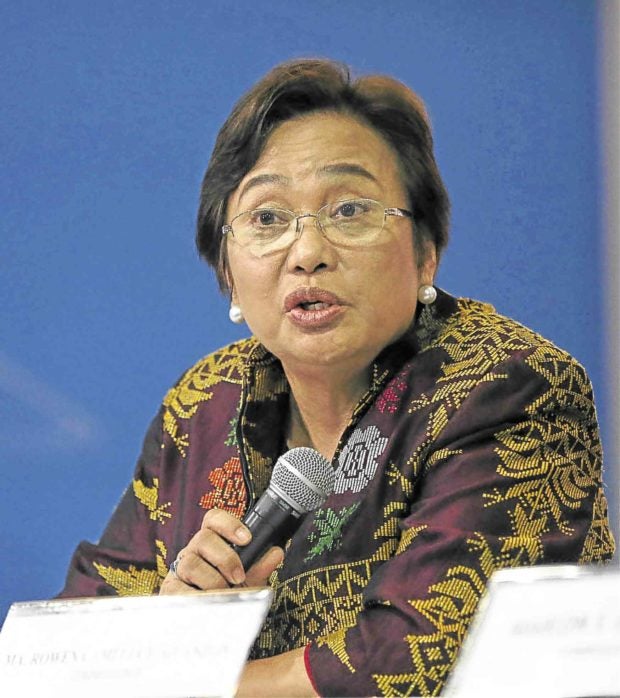 “Why on earth, of all people, will I ask him for the appointment [of these individuals]? Why, is he the President? Can he appoint a judge?” Guanzon said.

“I voted in favor of [Duterte Youth’s] registration during the [motion for reconsideration after it was initially denied for belatedly submitting its documents]. All of us in the First Division did [so in January]. So where is the exchange of favors? Where is the bribery?” Guanzon asked.

If she had sought favors from Duterte Youth, she added, “how come no judge related to me was appointed?”

Cardema’s allegations were his way of forcing her to inhibit “so he can get the votes to grant his [motion for reconsideration],” Guanzon said.

“I will not [inhibit],” she vowed, adding that she was daring Cardema to “state in public that I [had] committed a crime.”

Guanzon said she intended to file libel charges against Cardema for his allegations, but won’t be doing so anytime soon “because he will move to inhibit me if I do,” she said.

Guanzon added that with his allegations of extortion, which supposedly occurred early this year, Cardema had also admitted to committing an electoral offense.

“Is he saying he was engaging in partisan political activities while he was NYC chair?” Guanzon asked, alluding to President Duterte’s call for government officials to refrain from campaigning while still holding public office.

Despite calls for him to resign, Cardema continued to campaign for the Duterte Youth party list bid and stepped down only when he entered his name as a substitute nominee.

Cardema said that Guanzon had singled him out for disqualification among Duterte Youth’s nominees because the group had failed to fulfill its “obligations” to the commissioner.

Guanzon countered that he was singled out because the petition was filed “against him and not against the others” in the group.

Cardema presented screenshots on his phone showing an exchange of messages on Viber between him and a certain “Cong” starting on Jan. 16, shortly after the Comelec legitimized Duterte Youth.

“Yes, ma’am, we are fully committed,” read one of Cardema’s replies to Guanzon’s alleged emissary whom he said was currently a member of the House of Representatives.

Guanzon eventually signed Duterte Youth’s accreditation papers on Jan. 25, Cardema told the media, so the emissary asked him “to keep my end of the bargain.”

Cardema also denied sending threats to Guanzon. “That’s impossible. She had us by the neck for months,” he said.

Last Tuesday, Cardema filed a motion for reconsideration, asking the Comelec en banc to reconsider its decision to cancel his nomination because of the age issue. He said he would follow the Comelec process before going to the Supreme Court to settle the dispute.

At the press conference, Cardema broke into tears when he talked about his wife, Ducielle Marie Suarez, whom he substituted as Duterte Youth nominee. Suarez, whom he claimed was four months pregnant, was in the hospital because of stress and could lose her baby. This could lead to miscarriage, he added.

For poll watchdog Kontra Daya, Cardema’s attempt to turn the tables on Guanzon was not only futile but also proved that he was “willing” to circumvent the law.

He added that Cardema was only digging a hole for himself, to which “jail time is becoming more and more possible.”

After the Comelec ruled that he was “not eligible” to represent the proadministration Duterte Youth party list because of his age, Cardema said the group represented the professional sector, although his lawyer had earlier admitted that he neither had a college degree nor a profession.