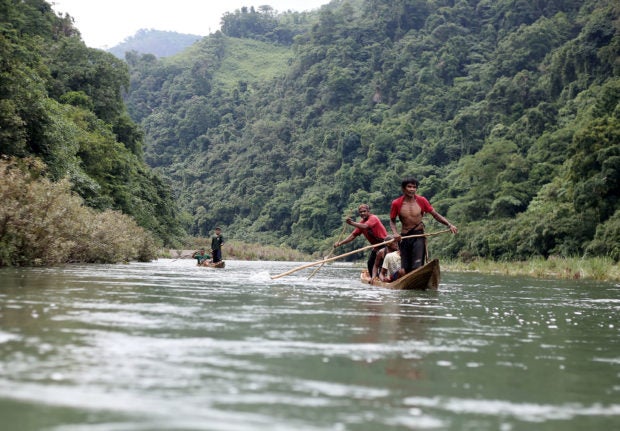 The Dumagat have been living on the banks of the Kaliwa River for centuries, and swimming is second nature to them. Yet they are afraid that they, along with their ancestral domain, their culture and traditions, will be drowned in the planned Kaliwa Dam, a project of the Metropolitan Waterworks and Sewerage System (MWSS) to be built with an P18.7-billon loan from China.

“We will drown … They say it will be deep,” said 10-year-old Erik John Leynes, who lives with his family near the Kaliwa River. 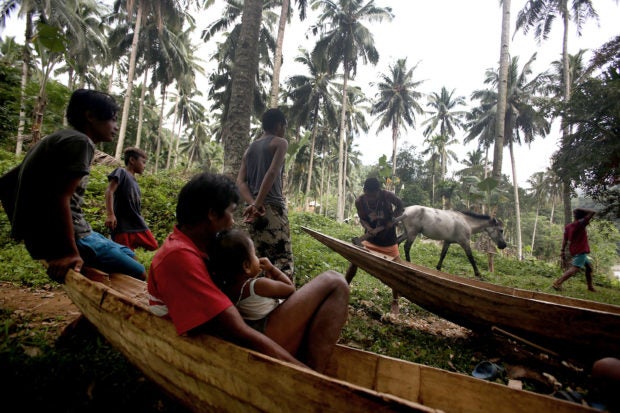 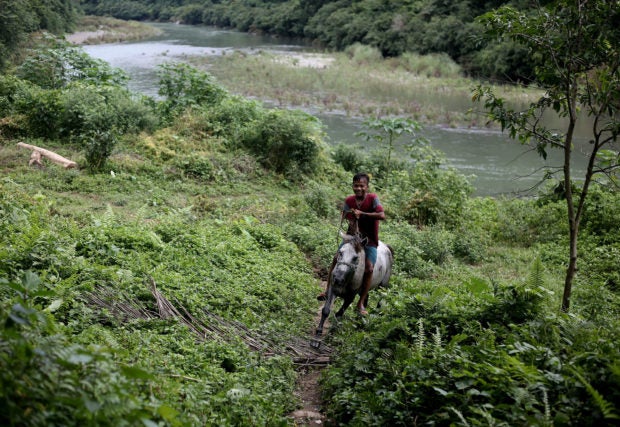 ROCKING THEIR BOAT Like many indigenous peoples across the country, the Dumagat folk of Quezon province are worried about losing their ancestral land and traditional way of life because of a major infrastructure project.

The river, which is to be the dam’s main water source, flows between the towns of Infanta and General Nakar in Quezon province, on the boundaries of Barangays Pagsangahan and Magsaysay. Beside it lies the sitio of Quiborosa—Ground Zero of the proposed dam.

When the dam is built, huge concrete walls will replace the bucolic scenery, forcing the indigenous people whose very lives are anchored on the forest and the river to change the way they live.

Daily, the residents of Quiborosa troop to the riverbanks to catch fish for their food and livelihood, do their laundry and groom their horses while their children frolic nearby. They also use the river to transport their goods and travel to the other side of the mountains. 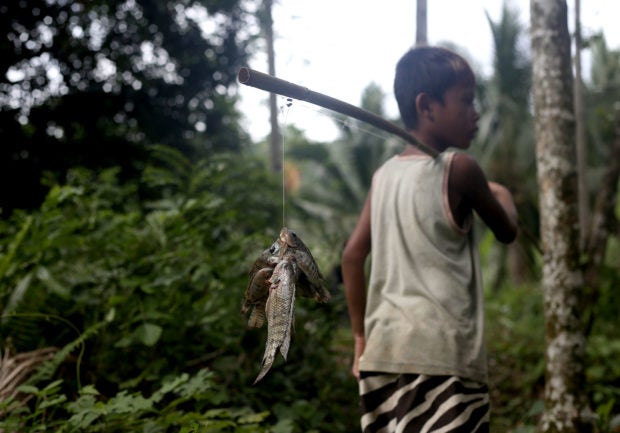 DAILY CATCH “This is our market,” a villager says of the Kaliwa River that has fed her people for centuries.

The forest is likewise crucial to the Dumagat’s daily needs. They depend on the fertile soil to plant coconuts, mangoes, bananas and taro. They gather wild honey, raise chickens and hunt wild boar for food.

If the government proceeds with the construction of Kaliwa Dam, “we will lose our freedom and our rights to our own ground that was cultivated by our ancestors,” said Sitio Baykura chief Rodrigo Piston.

The government’s relocation plans will make them like “birds put in a cage,” he said. 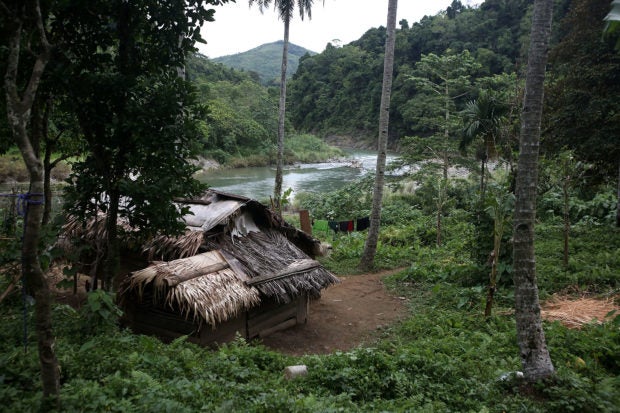 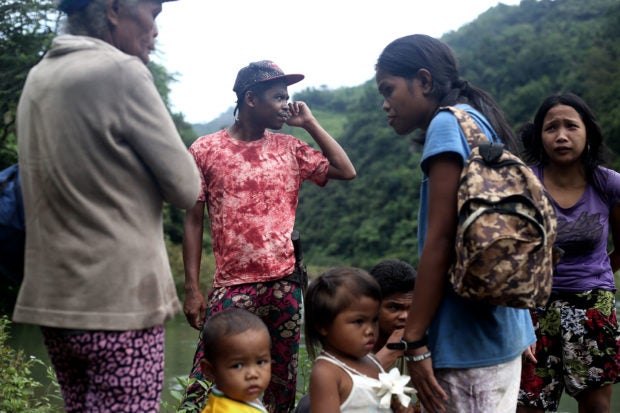 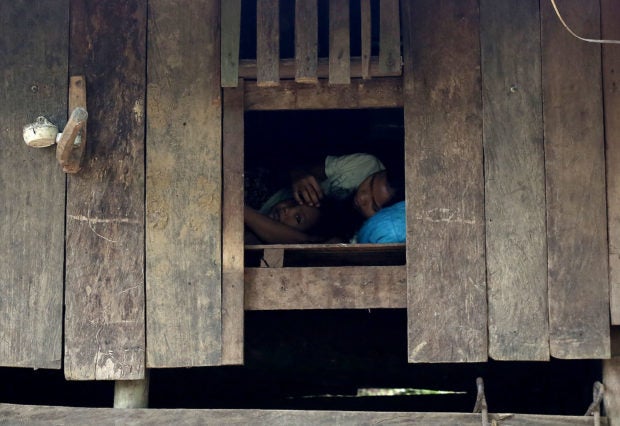 DEEPLY ROOTED Generations have lived off the fertile land, which is now on the map of a Chinese-funded dam project.

Cradling her year-old daughter Anna, Junalyn Penamente expressed strong opposition to the dam as she and her husband Jun fish in the river.

“This is our market,” she said. “This is where we look for food.”

Kaliwa Dam, scheduled for completion by 2023 to complement Angat Dam in Bulacan, is envisioned to boost water supply to Metro Manila and the provinces of Bulacan, Rizal and Cavite.

But according to a study made by the Japan International Cooperation Agency, the indigenous people living near the Kaliwa River will be displaced once construction of the dam begins. Ultimately, their ancestral lands as well as their sacred and burial grounds will be submerged. 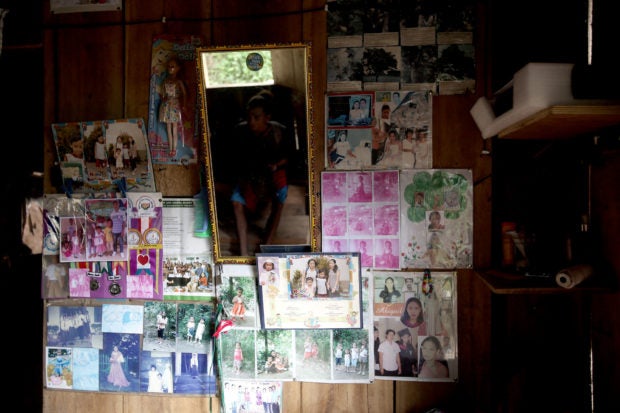 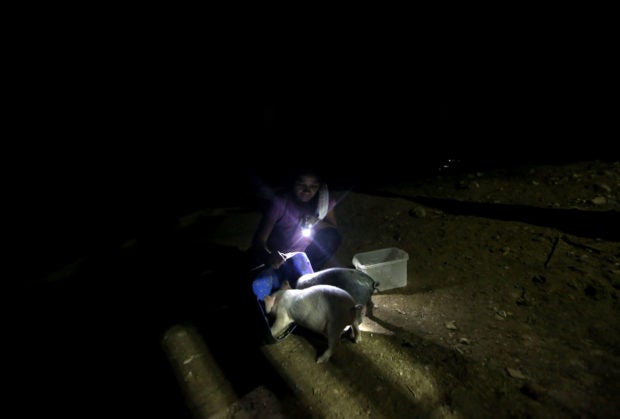 A HOME TO KEEP Scenes of a simple life facing unsettling times.

“We will die if the dam is built,” said Gloria dela Cruz, 44, a resident of Sitio Yokyok. 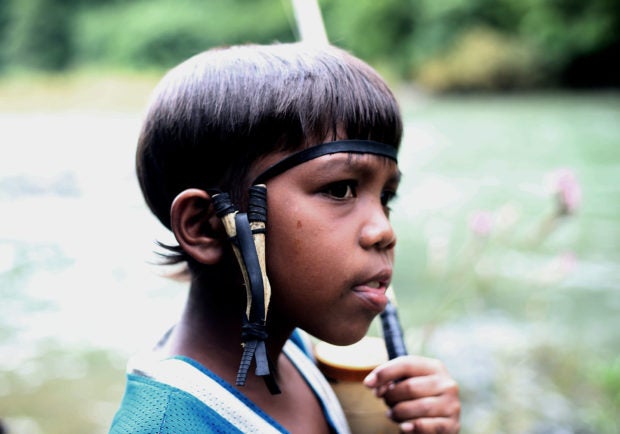 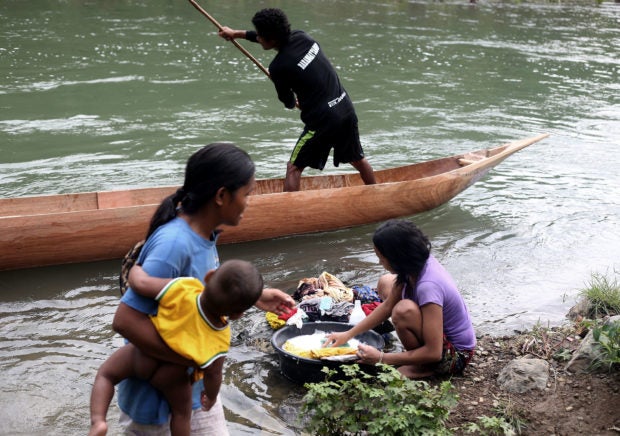 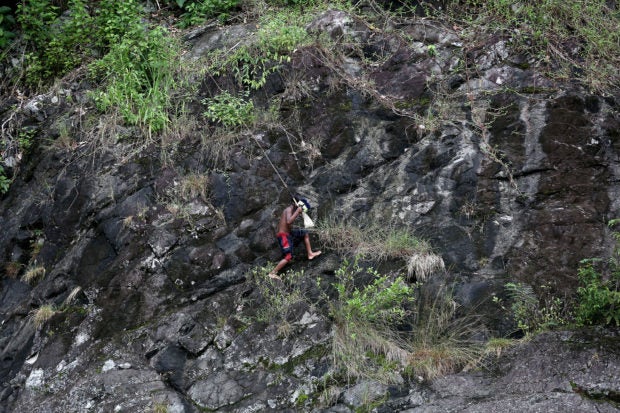 WAY OF LIFE  A child of the Dumagat, as if at the crossroads of an uncertain future, a family doing their laundry at the Kaliwa River, and a young man returning from fishing.

Under Republic Act No. 8173, or the Indigenous Peoples’ Rights Act, the conversion of ancestral domains requires the consent of the members of indigenous tribes. Thus, the MWSS through the National Commission of Indigenous Peoples, will need to secure the approval of the majority of the people before it can even begin to plan and construct the projected new water source.

According to Makid-Ata chief Joel Astuveza, four out of six clusters opposed the construction of the dam during the recently held assembly under the Free and Prior Informed Consent (FPIC) process.

He said the clusters against the project were the Minanga, Pagsangahan, Baybay and Umiray, and  the clusters of Cablao and Malibay had yet to decide on the matter. 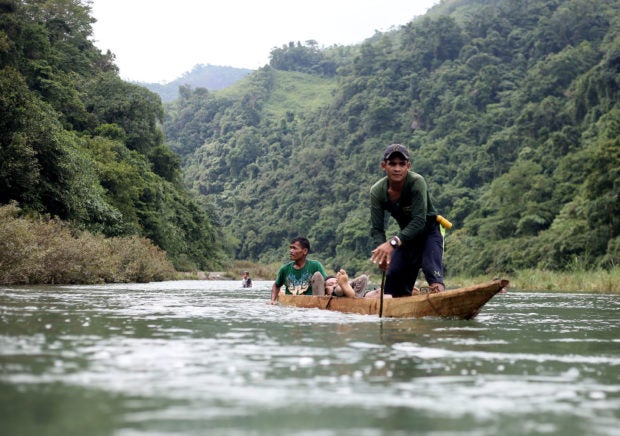 VITAL WATERWAY
The Kaliwa River as a Dumagat transport route, and its banks as foraging ground for their piglets.

But Astuveza said that even before the conclusion of the FPIC, Chinese engineers escorted by the Philippine National Police-Special Action Force were already surveying Sitio Cablao, and stone markers were being planted in Tinipak, which the Dumagat regard as sacred ground.

Piston, the sitio chief, added that the MWSS had promised them relocation land, scholarships and jobs—a move prohibited by law without the FPIC. 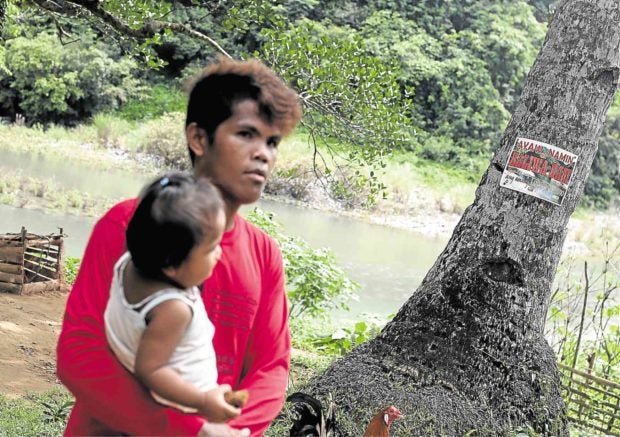 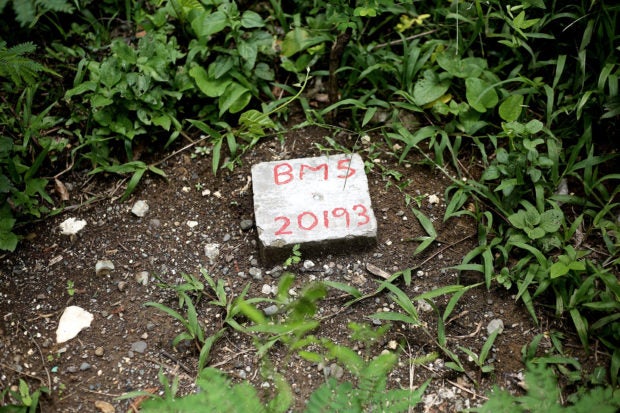 SIGNS A leaflet posted on a tree makes clear the Dumagat’s resistance to the Kaliwa Dam project, and a stone marker indicating the project area planted on what is regarded as sacred ground.

“We don’t need MWSS’ promises. What we need is our ancestral land, what we have right now,” Astuveza said.

Said Amy Penamante, a resident of Quiborosa: “I told my children, if the dam is built, we can’t go to the river anymore … We pray to God, the God who created the water and all these resources, not to allow the dam to be built.” 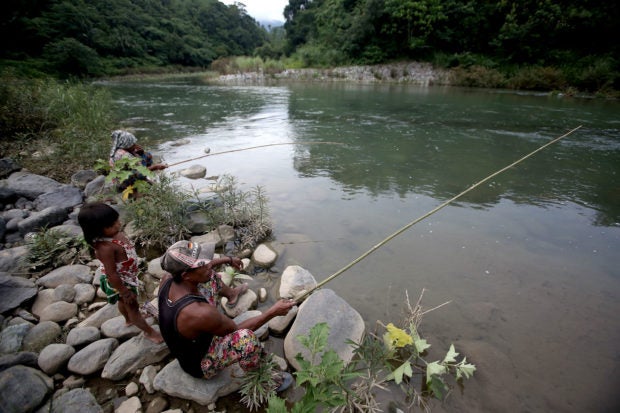 RIVERBANK BONDING A Dumagat man and his daughter wait for a fish to bite in the Kaliwa River. —PHOTOS BY RICHARD A. REYES 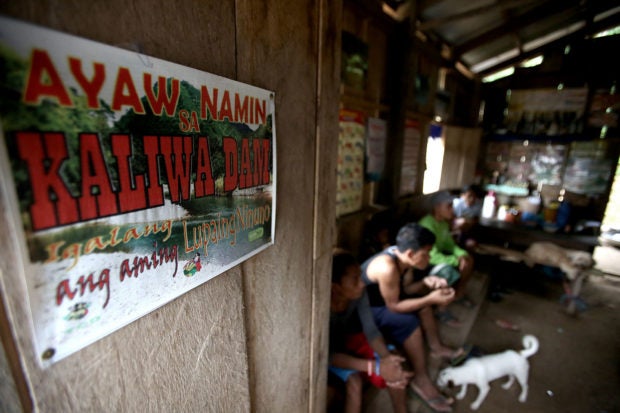 SAYING ‘NO’ A poster inside one of the houses in Sitio Tinipak, Barangay Pagsangahan, General Nakar, Quezon, expresses the villagers’ sentiments toward the planned dam. NATIVE CRAFT Sitio Tinipak chief Ningning Astuveza makes a broom out of native materials as her daughter plays nearby.

Read Next
COA questions CAAP over P500M spent for 10 execs’ life insurance
EDITORS' PICK
Diokno to Duterte: OK to make fun of buck tooth, but focus on people’s needs first
10 Filipinos positive for COVID-19 in UK, 7 in Ireland — envoy
IATF to LGUs: Issue ordinances vs attacks on frontliners, COVID-19 patients
Nograles: Cabinet members to donate 75% of monthly salary to aid COVID-19 fight
Quick chat with Nicole Andersson: ‘You really don’t need much to be happy’
Robredo spox thanks Duterte for defending VP’s efforts vs COVID-19
MOST READ
Coronavirus hotbed Rizal to shut borders on April 6
Sotto on Isko Moreno’s call: We do our job without the media following our every move
‘Money Heist,’ ‘Tales from the Loop,’ ‘Killing Eve,’ ‘Never Have I Ever,’ ‘After Life’: Five not-to-be missed series this April
ADB warns PH against prolonged lockdown
Don't miss out on the latest news and information.