Guanzon to Cardema: ‘Study your case, get a good lawyer’ | Inquirer News

Guanzon to Cardema: ‘Study your case, get a good lawyer’ 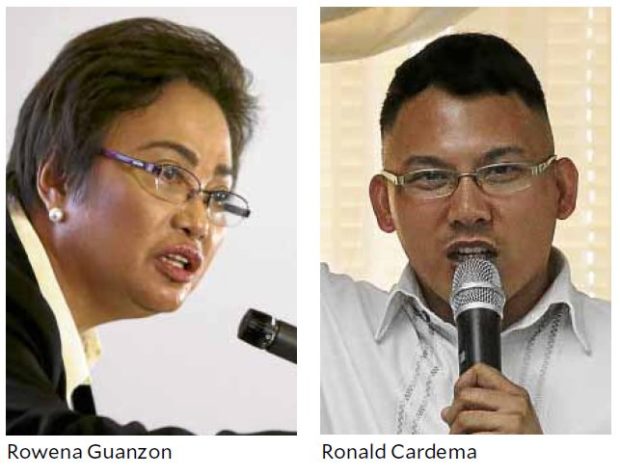 MANILA, Philippines — “A friendly advise to @RonaldCardema he should study his case and get good lawyer.”

Commission on Elections (Comelec) Commissioner Rowena Guanzon tweeted this Saturday to National Youth Commission (NYC) Chairman Ronald Cardema who had accused her of asking favors in exchange for the approval of the Duterte Youth party-list’s accreditation.

A friendly advise to @RonaldCardema he should study his case and get good lawyer. Imagine a former @COMELEC Chairman is opposing him.

Cardema previously filed his application for substitution as Duterte Youth Partylist group’s first nominee after the original nominees, including his wife Ducielle Marie, withdrew their nominations.

However, the Comelec First Division ruled that Cardema, at 34 years old, was not eligible to represent the youth because under the party-list law a youth sector representative should be between 25 and 30 years old.

“Imagine a former @COMELEC Chairman is opposing him,” Guanzon said in a tweet.

Brillantes previously bared that he aims for the cancelation of the Duterte Youth party-list group after the pro-administration group refiled a list of its nominees and placed Cardema at the top.