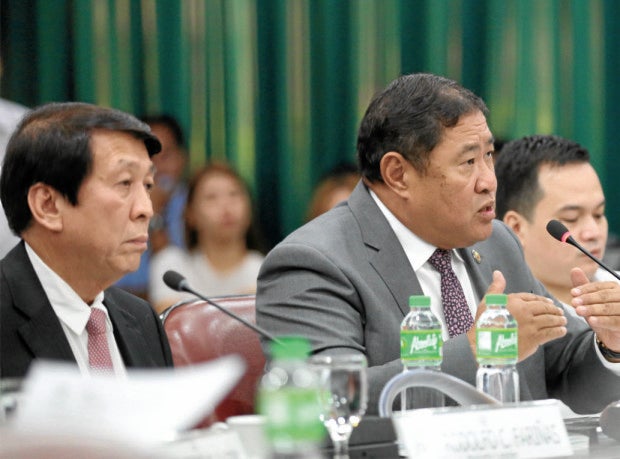 This after the justice committee chaired by Oriental Mindoro Rep. Reynaldo Umali unanimously approved its report finding no substance in the impeachment complaint filed by Magdalo Rep. Gary Alejano. Seventeen members were present.

Thus starts the one-year ban for impeachment against the President, Umali said.

“By unanimous vote, the committee report on resolution dismissing the verified complaint for impeachment and supplemental complaint affidavit filed by Rep. Gary Alejano against President Rodrigo Duterte, effectively putting a one-year ban on any and all impeachment complaints that may be filed against the president, is hereby approved unanimously,” Umali said.

According to Section 4, Rule III of the House Rules of Procedure in Impeachment Proceedings, the House committee on justice is mandated to determine if an impeachment complaint is sufficient in form and substance if the recital of facts constitutes the offenses charged.

According to the approved committee report, the verified complaints were sufficient in form, but were defective and insufficient in substance especially after Alejano, who stood as complainant, admitted he had no personal knowledge on the allegations in the complaints.

The committee report said the complaints were not sufficient in substance especially because the recital of facts was mere hearsay and did not constitute the offenses charged.

“(S)ince based on the admission by the complainant Rep. Alejano that he had no personal knowledge of the allegations he made in his complaint, such recital of facts are all mere hearsay.”

Alejano filed the two impeachment complaints against Duterte for his alleged role in state-sponsored killings and the Davao Death Squad, his alleged hidden wealth, as well as his alleged inaction to uphold the country’s sovereign rights over the West Philippine Sea, Panatag Shoal and Benham Rise amid the administration’s warming of ties with China.

While the justice committee found sufficient form in the complaints, it found no substance, primarily due to the failure of Alejano to verify “hearsay” allegations from self-confessed Davao Death Squad members Edgar Matobato and Arturo Lascañas.

The committee then forwarded the committee report to the plenary for approval. It also recommended the amendment of the House Rules of Procedure in Impeachment Proceedings that impeachment complaints may be dismissed based on insufficiency of form.

It was Majority Leader Rudy Fariñas who led the heated debate with Alejano last Monday, accusing the latter of committing perjury and ethics violations when he duly endorsed the impeachment complaints even though these were based on news reports and testimonies of other witnesses.

Fariñas said it was clear Alejano had no personal knowledge of his allegation that over 8,000 drug suspects have been killed in the administration’s brutal war on drugs.

He added that Alejano also had no personal knowledge that drug suspects were extrajudicially killed by the Davao Death Squad allegedly formed by Duterte when the latter was Davao City mayor.

Fariñas said Alejano himself admitted no personal knowledge by quoting other persons in the complaint such as Lascañas and Matobato.

READ: Lagman: Fariñas ‘premature’ in tackling cause in impeachment complaints

“Clearly, it’s not in his personal knowledge. That is the defect here… You are introducing statements under oath, these are not your own. Lalabas hearsay po ito (It would appear that these are hearsay),” Fariñas said in a heated debate with Alejano.

Alejano insisted that he had personal knowledge when he believed in the authenticity of the official documents and the news reports.

“I culled from important records including the news reports regarding the authentic records. I understand we are not here where we would present the evidence. There is no marking of evidence yet,” Alejano said.

At least 42 members of the committee stood up and found the impeachment complaint insufficient in substance.

With his impeachment complaints dismissed, Alejano said he would take his ouster bid against President Duterte to the International Criminal Court, where the Chief Executive already faces a complaint for crimes against humanity with his allies in connection with his administration’s brutal drug war. CBB/rga

READ: Alejano mulls filing case vs Duterte before ICC  | Duterte, 11 others accused of crimes against humanity before ICC