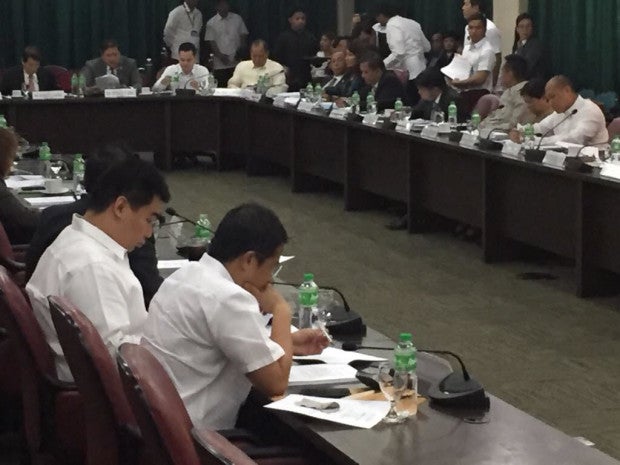 The House of Representatives justice committee on Monday dismissed the two impeachment complaints lodged against President Rodrigo Duterte for insufficiency in substance.

This was the result of the first hearing conducted by the justice committee on the two impeachment complaints filed against Duterte filed by Magdalo Rep. Gary Alejano.

Alejano filed the two impeachment complaints against Duterte for his alleged role in state-sponsored killings and the Davao Death Squad, as well as his alleged inaction to uphold the country’s sovereign rights over the West Philippine Sea, Panatag Shoal and Benham Rise amid the administration’s cooling of ties with China.

The justice committee is tasked to determine whether there is form and substance on the impeachment complaints.

The committee had a heated debate following Majority Leader Rudy Fariñas’ statement that Alejano’s impeachment complaints were based on news reports and testimonies of other witnesses, which means the impeachment filer Alejano had no personal knowledge on the matter.

Fariñas said it is clear Alejano had no personal knowledge on his allegation over 8,000 drug suspects have been killed in the administration’s brutal war on drugs.

He added that Alejano also had no personal knowledge that drug suspects were extrajudicially killed by the Davao Death Squad formed by Duterte when the latter was Davao City mayor.

Fariñas said Alejano himself admitted no personal knowledge by quoting other persons in the complaint, such as self-confessed Davao Death Squad members Arturo Lascañas and Edgar Matobato.

“Clearly, it’s not in his personal knowledge. That is the defect here… You are introducing statements under oath, these are not your own. Lalabas hearsay po ito,” Fariñas said in a heated debate with Alejano.

Alejano insisted that he had personal knowledge when he believed in the authenticity of the official documents and the news reports.

“I culled from important records including the news reports regarding the authentic records. I understand we are not here where we would present the evidence. There is no marking of evidence yet,” Alejano said.

But Kabayan Rep. Harry Roque said Alejano committed misrepresentation when he made under oath about the allegations of other witnesses and not his own personal knowledge.

“At best, this is misrepresentation, at worse this is a falsity… This is patent falsity. I believe this should be dismissed on the basis of form,” Roque said.

1-Sagip Rep. Rodante Marcoleta said the complaint should be dismissed for relying on electronic sources such as news articles instead of being based on Alejano’s personal knowledge.

“Considering this is a very important political process, we have to determine and dispose properly. I cannot find justification to continue because the admission itself is strong that the complaint does not rest on personal knowledge,” Marcoleta said.

Veloso said Alejano’s complaint complied with form because the complaint was duly endorsed by a member of Congress, in this case, Alejano himself.

“We go ahead with the impeachment complaint. Huwag naman patayin agad dahil lang sa insufficiency of form. There is substantial compliance, form-wise, in the complaint,” said Veloso, a former justice at the Court of Appeals.

Just when the members were expecting the committee to put the complaint to a vote, committee chairperson Umali suspended the hearing to hold an executive meeting to discuss their vote on the sufficiency of form of the complaint.

Umali said the committee has to discuss the ambiguity on House rules that a complaint dismissed due to lack of form may be returned to the Secretary General who will then return the complaint to the complainants.

The Rules state that a complaint may only be dismissed outright if is not sufficient in substance.

“We have heard the different positions of members. We would like to discuss the case in executive session so we will have a second chance to look into the aspect of the ambiguity on rules,” Umali said.

After the executive session, the justice committee voted that there is sufficient form, but the complaint has no sufficient substance to prosper.

At least 42 members of the committee stood up and found the impeachment complaint insufficient in substance.

Fariñas said the committee was only being liberal when it found the complaint sufficient in form.

The majority leader moved to amend the motion for dismissal of the complaint that the hearing would be the last time the committee would entertain any complaints filed by affiants who failed to verify the impeachment complaint.

“Out of liberality, the committee finds sufficient in form. I introduce the amendment that this will be the last time the committee entertains any complaint where the affiant or the complainant violates the verification,” Fariñas said.

“Any complainant who should come before Congress must really stand to his oath, that the material allegations of the complaint are true and correct based on his personal knowledge or are culled from authentic records,” he added.

In an interview after the hearing, chairperson Umali echoed Fariñas observation that Alejano may be liable for perjury and ethical violations.

Umali said the committee would include in its report its proposal to amend the Rules of the House to say that a complaint lodged before the justice committee should be duly authenticated and verified for it to prosper.

“Otherwise, whoever will file, we can sue for perjury and the endorser, as pointed out again by the Majority Leader, can be liable for an ethics case,” he added.

In an interview with reporters before the committee went on an executive session, Alejano held back tears and lamented that the committee prevented him from endorsing his complaint during the committee hearing because he was not a member of the panel.

Alejano said he would be willing to face a possible perjury and ethics complaint if only to stand up to his principles.

“The bigger picture is not about me. it’s about the victims of the extrajudicial killings policy. It’s about the interest of our country when it comes to the rights on the West Philippine Sea and the Benham Rise. It’s about transparency that is not being answered by the President,” Alejano said.

Alejano recounted his role in the Oakwood mutiny for which he was detained on trial for rebellion for seven years. Alejano was among the hundreds of Magdalo soldiers led by Antonio Trillanes IV in seizing the Oakwood serviced apartments in Makati in a failed bid to force then president Gloria Arroyo to resign over alleged corruption.

WHAT WENT BEFORE: Oakwood Mutiny

In 2007, Alejano joined Trillanes in their walk-out from a court hearing to wage a six-hour siege in Manila Peninsula Hotel, before they surrendered to authorities.
Alejano was detained in Camp Crame Custodial Center. Trillanes sought amnesty from then President Benigno Aquino III in 2011, and got it two weeks before the Makati Regional Trial Court was to hand down its verdict on the case.

The Magdalo party-list won seats during the 2013 and 2016 elections.

“Yes, hindi ako abogado na magaling magpa-ikot-ikot sa batas. Ako ay dating sundalo. Ang alam ko lamang ay paano i-defend ang bansang ito (Yes, I am not a lawyer who is skilled in skirting the law. I am a former soldier. I only know how to defend the nation),” Alejano said.

“‘Yung consequences ay pitong taong pagkakakulong. So be it. Ang importante, tinatayuan natin ang tama (The consequences of that was seven years in prison. So be it. What’s important is we stood for what’s right),” he added.

Alejano said he is studying the possibility of going to the court of last resort, the International Criminal Court, where Duterte already faces a complaint for alleged extrajudicial killings of drug suspects in the country. JE