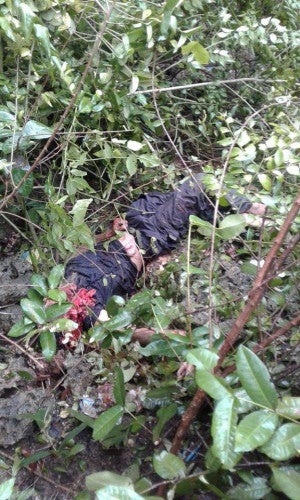 An Abu Sayyaf banditL later identified as Abu Ubayde, lies dead on the ground following a shootout with government troops in Barangay Cahayag on Pangagan Island, Calape town in Bohol, on May 15, 2017. (PHOTO BY LEO UDTOHAN / INQUIRER VISAYAS)

The “last two” were killed after more than a month of running following a foiled attempt by the Abu Sayyaf to set up a base in the province.

The last member of the Abu Sayyaf Group (ASG) in Bohol, identified only as Asis, was killed at 5:35 p.m. on Monday after he was spotted by policemen in Barangay Lawis on Pangangan island, Calape town.

He was cornered about 200 meters away from where his companion, Abu Ubayda, was repeatedly shot in the head by government troops during a shootout past noon.

Hours earlier, Abu Ubayda was killed after he and Asis took hostage a resident of Barangay Cahayag on Pangangan Island, Calape town about 1 p.m. on Monday.

Insp. Cresente Gurrea, chief of Calape Police Station, had then said government troops were hunting down the remaining Abu Sayyaf member who had managed to flee. (The remaining suspect was killed later by pursuing soldiers and policemen and would later be identified as Asis.)

Ubayda and Asis, who had been in hiding on the island since last week, took as hostage a fisherman who was gathering seashells along the shoreline about 1 p.m. 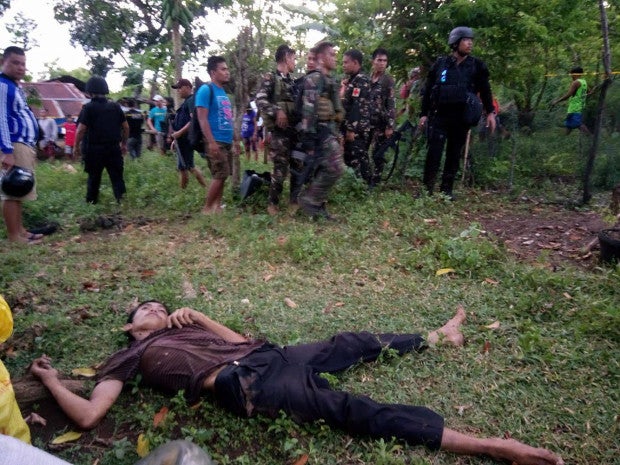 A sketchy report received by Gurrea earlier showed that the fisherman was able to escape and a shootout ensued between the two bandits and government troops.

During the shootout, Ubayda was killed but Asis managed to escape, only to be killed five hours later.

The police and the military had cordoned off the island since last week after receiving reports of the presence of Abu Sayyaf members who had been on the run since the government troops foiled their plan to establish a base in Inabanga town in Bohol and conduct terror activities on nearby islands.

In Manila, Brig. Gen. Restituto Padilla, Armed Forces of the Philippines spokesperson, said security forces came upon the bandits in Calape, Bohol, after receiving a tip from a concerned resident.

“Following a tip off from a concerned Boholano, combined elements from the AFP Central Command and the PNP encountered, at Barangay Kahayag, Calape, Bohol at around 12:30 p.m. today the last two remaining lawless elements who entered Bohol early in April this year,” Padilla said in a statement, adding that the second bandit was able to escape at the time.  Subsequent reports confirmed that law enforcers were able to catch up with the second Abu Sayyaf suspect, Asis, and kill him hours later.

Padilla said an M-16 rifle was recovered beside the  remains of Ubayda.

“No one among the government forces was hurt,” he said.

A band of bandits landed on the island on April 10 from their stronghold in Basilan province on a kidnapping mission, but they were thwarted as alert residents tipped off the authorities on their presence in Inabanga town.

A series of skirmishes ensued and a number of the bandits were killed. Four bandits were killed in Inabanga on April 11 and four more on April 22 in neighboring Clarin town. (With additional reports from Philip C. Tubeza, Philippine Daily Inquirer, @pctubezaINQ) SFM/rga 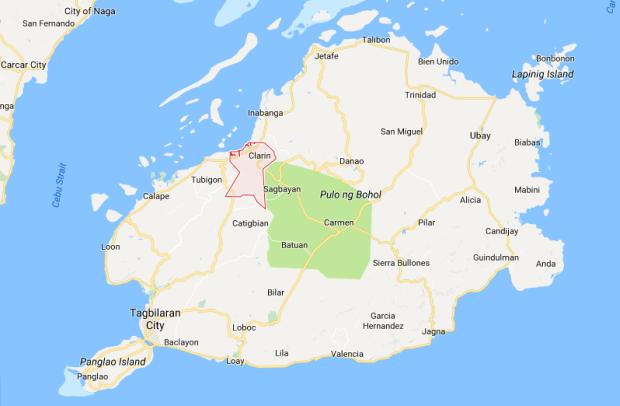 Map showing the towns of Inabanga, Clarin, Tubigon, and Calape in Bohol, where Abu Sayyaf stragglers have been apprehended and killed in clashes with government troops. (Image from Google Maps)