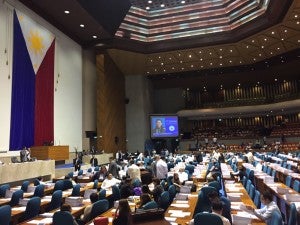 The House of Representatives holds its regular session at the Batasan Pambansa. (FILE PHOTO BY JOAN BONDOC / INQUIRER)

MANILA — The House of Representatives will prioritize and devote marathon hearings to the first impeachment case against President Duterte, similar to its inquiry on Sen. Leila de Lima’s alleged drug links in the national penitentiary.

“Like the [Ronnie] Dayan investigation, it took us 10 hours just to tackle. This will be given the same treatment, just to get away with it and to get it moving, as the case may be,” Majority Leader Rodolfo Fariñas said, referring to De Lima’s bodyguard who was among the witnesses heard at the congressional investigation on drug payoffs at the New Bilibid Prison in 2016.

He said the case would be referred to the committee on justice chaired by Oriental Mindoro Rep. Reynaldo Umali, which would “give it priority.”

He later filed a supplemental complaint alleging that the President had absconded on his duty to defend Philippine territory against China by refusing to take the Asian superpower to task for its incursions.

Fariñas explained that pursuant to House rules, the Speaker would refer the impeachment complaint filed against Mr. Duterte to the justice committee.

Fariñas said he didn’t believe the Alejano complaint would gain any traction in the 292-seat House.

“There’s only one of him… I read reports that even the Liberal Party will not support the complaint,” he said.

As for the two impeachment complaints prepared against Vice President Leni Robredo, Fariñas said it would depend on whether a House member would endorse either of them.

“If those who file later do not get an endorsement, then it’s just a scrap of paper,” Fariñas said.  SFM/rga

Read Next
House packed with families became death trap in Iraq’s Mosul
EDITORS' PICK
Viral phone HONOR X9a 5G launched at P16,990
Philippines to offer VAT refund to foreign tourists by 2024
Things you can do with vivo Y02s’ upgraded 3GB+64GB storage
Novak Djokovic crushes Tsitsipas to win 10th Australian Open
House energy committee chair Arroyo bats for cheap electricity
Labor groups slam planned importation of 450,000 MT sugar
MOST READ
Jaja Santiago acquiring Japanese citizenship, out for Philippine team–De Brito
Paolo Contis on real score with Yen Santos: What you see is what you get
Peter Rosalita gets standing ovation from America’s Got Talent judges, crowd: ‘No hiccups’
A crown and sash, a necklace and a kulambo
Don't miss out on the latest news and information.