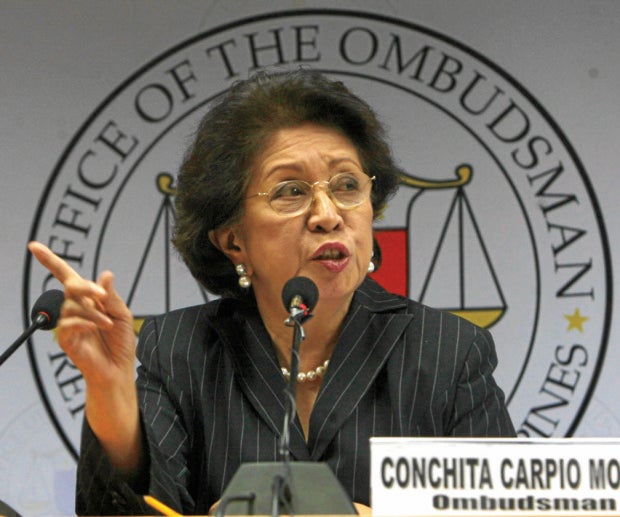 “The court has spoken,” Ombudsman Conchita Carpio Morales said on Tuesday in an ambush interview. “The Sandiganbayan directed the confinement of Napoles in Taguig [at the] Camp Bagong Diwa detention center.”

That was her reaction to the talks between Justice Secretary Vitaliano Aguirre II and the lawyers of Janet Lim-Napoles to have the alleged pork barrel scam mastermind detained at the National Bureau of Investigation (NBI) headquarters and possibly make her a state witness.

On Monday, the Sandiganbayan First and Third Division reiterated the order to have Napoles detained at the Camp Bagong Diwa now that her life sentence conviction for serious illegal detention had been reversed by the Court of Appeals.

Napoles was previously detained at the Correctional Institution for Women in Mandaluyong.

Morales, whose office denied Napoles’s request to become state witness in 2014 in indicting her for plunder, malversation, graft and direct bribery in the scam, said she was not bothered if there was any agreement between Aguirre and Napoles to have the accused be protected as state witness.

Morales said her office was not bound by findings of the Department of Justice (DOJ) that Napoles could become a state witness.

The OSP is under the Office of the Ombudsman.

During the administration of President Benigno Aquino III, Morales denied the request of Napoles for immunity as state witness, calling her the “most guilty” in the crime.

“Furthermore, Napoles appears to be among the most guilty of all respondents,” the Ombudsman then said. “I’m not bothered at all. We are confident of our position. Whatever they say, let them say. We are not bothered. We’re not concerned at all by whatever they say about whether or not there is a pending agreement… between Napoles and the DOJ.”

Morales denied Aguirre’s claim that there was selective justice when her office spared the allies of the Aquino administration of being charged.

She said her office had pending investigations into the involvement of lawmakers in the Priority Development Assistance Fund (PDAF) misuse.

“I don’t know about those alleged perpetrators which were overlooked by the Office of the Ombudsman, because our office is continuing its investigations against those possible persons who were involved in the PDAF controversy,” Morales said.

Napoles’s lawyer Stephen David wrote to Aguirre and even met with him to request that his client be secured at NBI headquarters due to death threats.

Benhur Luy had accused Napoles of illegal detention to prevent him from spilling the beans on the pork barrel scam. That was central in his testimony before the Sandiganbayan, where he said he kept records of the purported commissions for lawmakers in cahoots with Napoles.

Napoles allegedly masterminded the scheme of pocketing kickbacks in the ghost projects using the lawmakers” PDAF.

Napoles has been convicted by the Makati Regional Trial Court and sentenced to life imprisonment for detaining Luy for three months over suspicions he was starting his own scam behind her back and stealing money from her.

But in a 35-page decision, the 12th Division of the Court of Appeals reversed the conviction and said the state prosecutors failed to present evidence to show that Napoles was behind Luy’s detention at Bahay ni San Jose, a retreat house in Magallanes Village in Makati.

“Despite the fact that Benhur called and updated his family from time to time, he never mentioned anything about being detained forcefully,” the court said. “In several instances, he even met with his family and yet never showed any sign that he was being kept in Bahay ni San Jose against his will.”

“The prosecution failed to satisfactorily explain the resistance of Benhur Luy to the rescue operation, which, to our mind negates the claim of serious illegal detention,” the CA added.

The CA ruled in favor of Napoles after Solicitor General Jose Calida filed a manifestation in lieu of rejoinder to the appellate court recommending Napoles’s acquittal.

Calida said the element of deprivation of liberty was absent and wanting in the case and that justice should be served on the alleged scam mastermind.

Napoles’s misfortune seemed to have had a reversal during the administration of President Rodrigo Duterte, whose supporters include  her known lawyers Stephen David and Bruce Rivera. /atm/rga