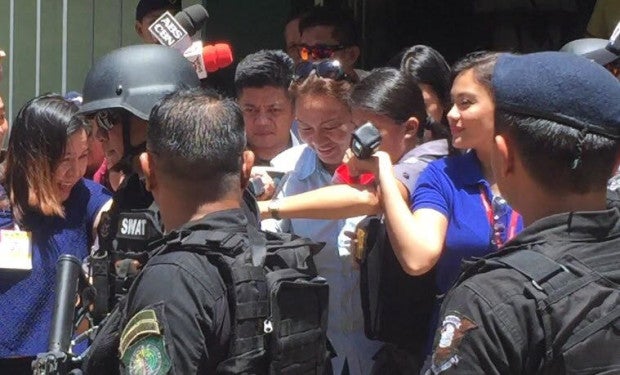 In an ambush interview at the Sandiganbayan, Atty. Stephen David laid down their legal options to assail the credibility of Luy, the star witness in the alleged scheme of pilfering kickbacks from ghost projects of lawmakers’ Priority Development Assistance Fund (PDAF).

David said Napoles may refile her bail petition bid in the plunder cases of former senators Ramon Revilla Jr., Juan Ponce Enrile and Jinggoy Estrada. Napoles and the senators except Enrile have been denied bail due to strong evidence of guilt.

She may even resort to plea bargaining agreement where an accused would plea guilty to a lesser offense, he added.

Napoles had been allowed to post bail in her plunder cases with former Masbate governor Rizalina Lañete and former Apec Rep. Edgar Valdez. But she could not be released owing to her detention in connection with her other cases.

(We can file a petition for bail. We can also resort to plea bargaining. There are a lot of options.)

David said the denial of Napoles’ bail petitions may be questioned now that the credibility of state witness Luy is assailed.

(We’re exploring petition for bail on the basis of unreliable statement of Luy which we discovered in the illegal detention case.)

David said he has sent a letter to Justice Secretary Vitaliano Aguirre requesting that Napoles, whose life imprisonment at the Correctional Institution for Women in Mandaluyong stands pending an order from the Sandiganbayan to transfer her, be detained instead at the National Bureau of Investigation (NBI) detention center.

Before Napoles’ conviction, the Sandiganbayan has committed Napoles at the women’s detention center at the Camp Bagong Diwa in Taguig.

(I actually wrote to the DOJ yesterday requesting if Napoles could be transferred there. The correctional is only for convicted prisoners.)

David earlier said Napoles may even turn state witness. The Ombudsman has denied her request for state witness after the anti-graft office did not find her least guilty.

David said Napoles now has an opportunity to clear her name and pin down other lawmakers in the scam who may have been spared during the previous administration.

(We handled her case because what we’re after is the truth.)

David even said the misfortune of Napoles, long been branded as a polluted suspect as the mastermind, is now facing a reversal under a more just and fair administration.

(During the previous administration, Napoles said everyone does not want to listen ti her because her testimony might drag administration allies. She was accused as a polluted source.)

(But now, under a fair administration, they want to know what really happened to the PDAF.)

Napoles looked blooming at the Sandiganbayan Wednesday as she attended the signing of her pre-trial order in her case with Valdez.

LOOK: Napoles all smiles after reversal of misfortune

Napoles locked herself inside the vehicle and only alighted for a bathroom break.

The alleged scam mastermind didn’t wave to reporters, but she looked giddy as she smiled to herself refusing to respond to questions.

When she was back inside the vehicle, Napoles could be seen from behind the tinted windows smiling and waving to the media before the ambulance took off.

Napoles has a reason to be giddy — she had a reversal of misfortune after the Court of Appeals (CA) cleared her of being convicted for the serious illegal detention of her finance officer Luy.

Napoles’ alleged illegal detention of Luy to prevent him from spilling the beans is central in Luy’s testimony before the Sandiganbayan, where he testified that he kept records of the purported commissions for lawmakers in cahoots with Napoles.

Napoles was earlier convicted by the Makati Regional Trial Court and sentenced to life imprisonment for detaining Luy for three months over suspicions he was starting his own scam behind her back and stealing money from her.

But in a 35-page decision, the appellate court’s 12th division reversed the conviction and said the state prosecutors failed to present evidence to show that Napoles was behind Luy’s detention at Bahay ni San Jose, a retreat house in Magallanes Village in Makati.

“Despite the fact that Benhur called and updated his family from time to time, he never mentioned anything about being detained forcefully. In several instances, he even met with his family and yet never showed any sign that he was being kept in Bahay ni San Jose against his will,” the appeals court said.
“The prosecution failed to satisfactorily explain the resistance of Benhur Luy to the rescue operation, which, to our mind negates the claim of serious illegal detention,” the CA added.

The CA ruled in favor of Napoles after Solicitor General Jose Calida filed a manifestation in lieu of rejoinder to the appellate court recommending Napoles’ acquittal.
Calida said the element of deprivation of liberty is absent and wanting in the case, and that justice should be served on the alleged scam mastermind.

Napoles’ misfortune seemed to have a reversal during the administration of President Rodrigo Duterte, whose supporters include known Napoles lawyers Bruce Rivera and Stephen David.
David’s wife Lanee is appointed by Duterte as deputy commissioner at the Bureau of Internal Revenue. JE
READ: Lawyers, Duterte, Napoles: What gives?