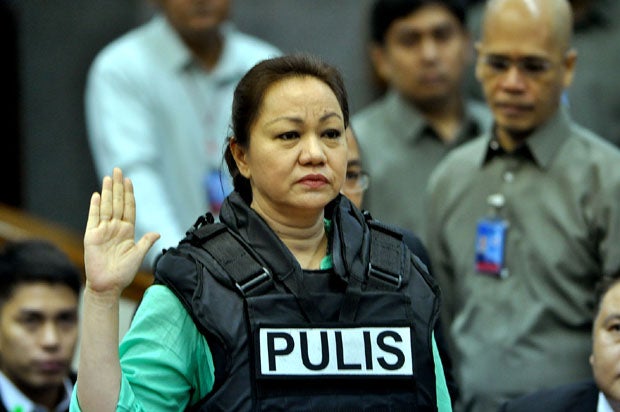 In a 35-page decision, the Appeals Court’s 12th division said the government prosecutors failed to present evidence to show that she was the one behind Luy’s detention at Bahay ni San Jose, a retreat house in Magallanes Village in Makati.

“From a careful review of the evidence at hand, we can neither infer nor establish from the acts of the accused-appellant any joint purpose and design, concerted action and community of interest to illegally detain Benhur,” the appeals court said.

For one to be convicted of serious illegal detention, the prosecutors must prove that the victim was deprived of his liberty, meaning there has to be actual confinement or restriction of the person.

However, in this case first, the appeals court noted the testimony of Father Peter Edward Lavin and Monsignor Josefino Ramirez, who suggested that Luy did not manifest any indication that he was coerced.

Fr. Lavin said in one instance, he saw Luy “walking in front of the swimming pool, he was quite happy because he was talking to someone on the cellphone.”

Second, the appeals court added that Luy never attempted to escape or tell anyone of his situation.

“Despite the fact that Benhur called and updated his family from time to time, he never mentioned anything about being detained forcefully. In several instances, he even met with his family and yet never showed any sign that he was being kept in Bahay ni San Jose against his will,” the appeals court said.

Third, the CA cited the testimonies of the security personnel of Pacific Plaza who said that Luy violently resisted rescue and even insisted that Jojo [referring to Napoles’ brother Reynald Lim] did not do anything illegal or criminal against him.

“The prosecution failed to satisfactorily explain the resistance of Benhur Luy to the rescue operation, which, to our mind negates the claim of serious illegal detention,” the CA said.

“As already established, the NBI (National Bureau of Investigation) operatives properly introduced themselves to Benhur and the security guards who were at the scene testified to what Benhur really said during the rescue operation.”

“Verily, Benhur’s self-contradictions on material facts are irreconcilable with the evidence at hand. This court, thus, has to reject his testimony for being credible,” the CA said.

The CA added that while Napoles, during her argument with Luy, threatened him that he will be detained, it is not enough to conclude that she ordered Luy’s detention.

“We do not find the phrases ‘hindi ka na makakalabas’ and ‘ikulong na yan’ clear and unambiguous. They do not impart a clear and evident resolution to commit the crime of serious illegal detention or order to do the same,” the CA said.

“In sum, the inner recesses of our mind and conscience, the evident conclusion is that the quantum of proof required in this case has not been met. We hold that the evidence against accused-appellant [Napoles] is not sufficient to establish her participation culpability in the alleged criminal conspiracy,” the CA said.

The appeals court said any evidence or proceeding against Lim would be moot and academic.

But Napoles will remain in detention because she is facing a string of plunder cases.