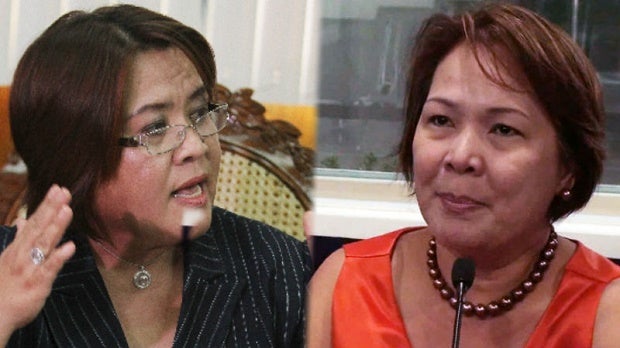 Detained Sen. Leila de Lima on Sunday said former “jueteng” whistleblower Sandra Cam, who figured in a reported outburst with airport workers last month, must be investigated for her alleged involvement in “nefarious” activities such as gambling and illegal drugs.

In handwritten letter from her detention cell, De Lima called Cam an “evil of a woman” and maintained that she should not be given any government position.

“Sandra Cam must not be allowed to have a respectable position of trust in government. She must instead be investigated for certain nefarious activities credible sources say she has managed to get involved in all these years such as swindling, illegal gambling, and even drugs,” De Lima said.

De Lima, who is currently detained at the Philippine National Police Custodial Center for alleged involvement in the Bilibid drug trade, accused Cam of having a hand in what she called a demolition job against her supposedly orchestrated by the administration.

“I also know that Sandra Cam, along with other shady characters and operators, has played a major role in the massive demolition job staged against me, which includes harassment, coercion and blackmailing of so-called witnesses and prospective witnesses,” she said.

“Mission accomplished, hence, the impending reward to be bestowed upon her by her principal that’s the ‘debt of gratitude’ alluded to by Duterte. Because of that ‘special’ relationship with the tyrant, Sandra Cam thinks and acts she is untouchable. This evil of a woman must be exposed, prosecuted and jailed,” the senator added.

On Feb. 16, a Masbate-bound Cam berated an employee of Ninoy Aquino International Airport and her manager when she was not accorded VIP treatment. An irate Cam gave the employee a tongue-lashing and even dropped the name of special presidential assistant Bong Go and said she will be given a government post in three months.

On Saturday, President Duterte said he was willing to offer Cam a government post for helping him in his campaign, adding that he was leaving it to the public to judge her following the airport incident. But Duterte said there was no vacancy in the Cabinet.

“She helped me during the last election. I’ll be frank. Her behavior? Let the public judge it. She helped me and I will help her. That’s a debt of gratitude,” Mr. Duterte told reporters in Baguio where he led the inauguration of the government channel PTV Cordillera hub.

“If she would ask for work, I’d give her work. It’s not because she was shouting there. That’s her business,” he added. CBB/rga