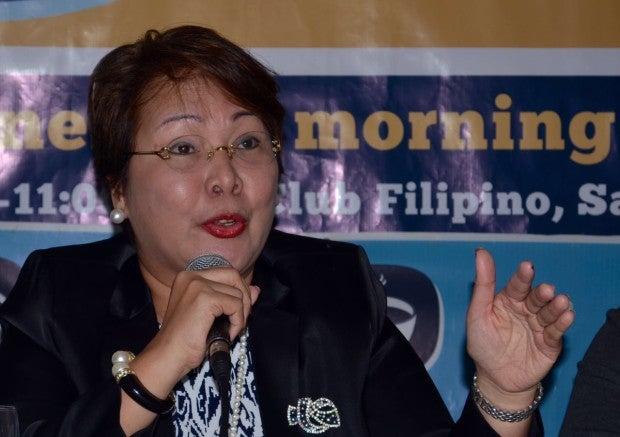 Former “jueteng” whistle-blower Sandra Cam blew her top at Ninoy Aquino International Airport (Naia) last month when she was not accorded the VIP treatment she had expected, even boasting of her anticipated appointment to a Cabinet post in three months.

Her outburst was apparently triggered by the failure of a twentysomething airport employee to recognize her and know why she was at the VIP lounge.

The Naia employee received a tongue-lashing heavily laced with cusses, with the name of Special Assistant to the President Bong Go dropped in the mix along with a supposed Cabinet post in the offing, according to a Manila International Airport Authority (Miaa) incident report obtained by the Inquirer.

On Feb. 16, the Masbate-bound Cam was escorted by a member of the Naia Airport Police Department to the VIP lounge in one of the airport’s terminals.

As part of the airport standard protocol, the female Miaa employee asked Cam for a government ID so she could fill out a “meet and assist” form after mistaking the losing Senate candidate for  a government official.

Cam did not have any IDs with her and could show only  a credit card with her name on it.

She then told the Miaa worker in Filipino, “I don’t have a government ID but in three months, I will be a member of the Cabinet.”

Cam’s statement prompted the employee to explain the terms of use of the VIP lounge, which include a fee of P1,120  that can be waived as a matter of courtesy for government officials.

After several minutes of accomplishing the “meet and assist” form for Cam, the worker apologized for disturbing Cam in the middle of a call and asked her to sign the document. The former whistle-blower asked her what the form was for, and the employee explained that it was for record purposes, reminding Cam that the fee also had to be paid.

At this point, Cam grew visibly irked and informed the young woman that she was escorted to the VIP lounge by the police because she was a “high-risk person” and even questioned why she had to pay for just sitting there.

When the Miaa worker explained the process and the terms of use of the VIP lounge, Cam demanded to see the manager.

The VIP lounge manager listened to Cam’s complaint about how “arrogant” and “snobbish” the Miaa employee was.

Cam then turned to the young woman with whom she was annoyed and, pointing at her, let out a stream of cusses.

Unappeased, she went on to shout at the young worker in Filipino, “You know, hija? I was on the phone. Do you know who I was talking to? I was talking to Bong Go. Do you know me? If you don’t, search me up on Google. I told you already I had no government ID because in three months I would be a member of the Cabinet.”

She further ranted on about the Miaa employee being unfit to be a worker at the airport and threatened to have her dismissed from her job.

“I was a former flight attendant and that is not how you approach passengers. The reason I was put here (VIP lounge) is because I might get shot outside. Can you give me protection?” Cam said in Filipino.

Out of courtesy, both the VIP lounge manager and the young worker apologized to Cam but she continued: “No. My blood pressure has already shot up. I won’t let this pass.”

To pacify the former whistle-blower, the manager gave her bottled water, which Cam refused, saying, “Why should I pay P1,200 for this small room when  you have nothing to offer but water and coffee?”

When Cam calmed down, the manager explained that all VIP lounges at Naia terminals charge  user fees and that only government officials are exempted from the fees.

Despite Cam’s flare-up and hostility, the Miaa workers still accorded her the courtesy of informing her that her flight to Masbate was already boarding.

The VIP lounge manager and the young woman reported the incident to the Miaa administration to prevent a recurrence, describing the unfortunate episode as something that could have been avoided through coordination between airport offices.

The Inquirer tried to reach Cam through her mobile phone to get her side of the story but she did not answer the paper’s calls and text messages.

Cam, who initially surfaced as a whistle-blower in a 2005 Senate investigation of the jueteng payola scam, unsuccessfully ran for a Senate seat under the Pwersa ng Masang Pilipino party in the 2016 national elections.

She was a regular attendee of the Senate extrajudicial killing hearings where she claimed that it was through her employee in Abu Dhabi that suspected drug lord Kerwin Espinosa, who was then hiding out, was captured and brought back to the Philippines to face the Senate inquiry.