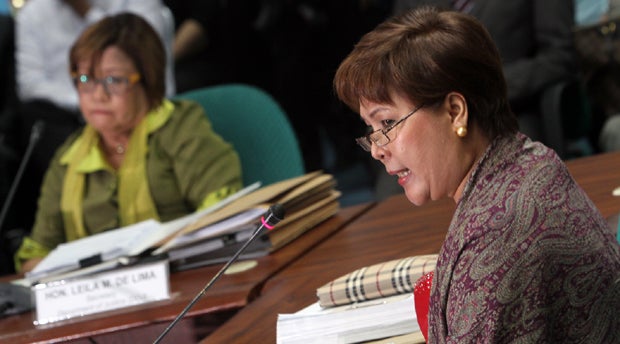 Citing sources she did not name, Cam said Dayan collected about P5 million a week from drug lords in the national penitentiary.

Amid De Lima’s calls for accountability on the rising death toll in the administration’s war against drugs, President Rodrigo Duterte on Wednesday branded the senator as an “immoral woman” for her alleged affair with her driver, who he said collected drug money to fund her campaign.

In 2014, Cam opposed De Lima’s confirmation as justice secretary before the Commission on Appointments because of her “controversial private life,” including an “illicit affair with her married driver,” Dayan.

Cam said among the high-profile inmates whom Dayan collected money from were gang leader Jaybee Sebastian and Peter Co, reportedly the leader of the so-called “Bilibid 19” or a group of drug convicts living a luxurious lifestyle in the national penitentiary.

Co, together with Peter Lim alias Jaguar and Herbert Colangco alias Ampang, was earlier named by Duterte as part of the top tier drug lords in the country.

(After 2014, she ordered a raid in Bilibid, right? They transferred the Bilibid 19 to NBI. But she left out one inside Bilibid: Jaybee Sebastian, the commander of the Commando Gang.)

“I pitied her but this is karma for her… I feel vindicated,” said Cam, who lost her bid for a senatorial seat while supporting Duterte’s candidacy in the May elections.

Cam, however, refused to add more details on Dayan’s alleged transactions inside the penitentiary as she “did not want to preempt Duterte.”

Pressed by reporters about his allegations, Duterte on Thursday said he has evidence and witnesses to back his tirades against De Lima, as he advised the media to go to the Department of Justice and the Commission on Human Rights to validate the “scandal.”

READ: Duterte: I have evidence to back tirades vs De Lima

An emotional De Lima denounced Duterte’s accusations as character assassination and abuse of power, as she pleaded for her family to be spared from  personal attacks. IDL/rga