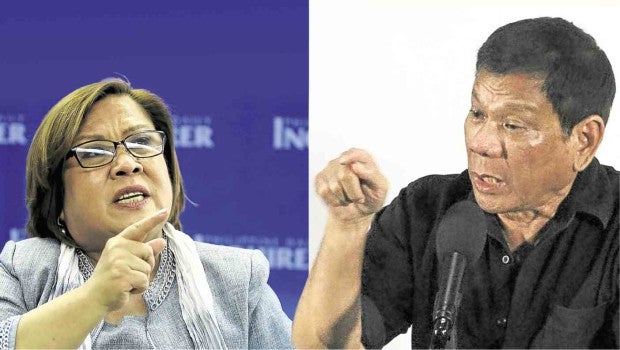 President Rodrigo Duterte on Wednesday linked his staunchest critic, Sen Leila de Lima, to the illegal drug trade, calling her an “immoral woman” whose driver, who he claimed was also her “lover,” collected drug payoffs for her.

Without naming the senator in a speech in Camp Crame, the tough-talking President accused De Lima of “political posturing when you yourself has a very sordid personal and official life.”

But Mr. Duterte, at an airport interview later, named De Lima as the senator he had referred to in his remarks.

“Here is a senator complaining. One day I will tell you that her driver himself, who was her lover, was the one collecting money for her during the campaign,” the President said in his nationally televised speech at the 115th Police Service Anniversary at Camp Crame.

“Here is an immoral woman, flaunting, well of course insofar as wife of the driver was concerned, (her) adultery,” he said. “Here is a woman who funded the house of her lover and yet we do not see any complaint about it. Those money came readily from drugs.”

De Lima, chair of the Senate committee on justice and human rights, is scheduled on Monday to start an inquiry into Mr. Duterte’s bloody war on illegal drugs.

She said she would present witnesses to show that police “scalawags” were behind the summary execution of some suspected drug dealers.

Nearly 600 suspected drug peddlers and users have been killed in police operations since Mr. Duterte took office six weeks ago, police say, but rights groups put the number at more than 1,000.

“We are willing to submit ourselves for an investigation before anybody,” Duterte said, adding some of the killings were carried out by drug gangs.

“But do not attribute acts of other criminals upon my government. The fight against drugs will continue unrelenting until we have destroyed the apparatus operating in the entire country,” he added.

In its annual report, the Philippine Drug Enforcement Agency said that by the end of 2015, the narcotics problem had affected 99 percent of barangays in Metro Manila alone.

The Dangerous Drugs Board said that in 2012, 1.3 million Filipinos were drug users, mainly of “shabu,” or methamphetamine hydrocloride, allegedly supplied by Triad gangs from China.

There have been cases when police officers have killed suspected drug dealers in handcuffs, in police custody or inside prison cells, civil rights lawyers have said.

Police have said they will not condone wrongdoing but that some may have been killed by rogue officers.

Mr. Duterte won the presidency in May on a single platform of suppressing crime and drugs, declaring war on narcotics on his first day in office. He has identified 160 officials, police and judges in a name-and-shame campaign to stop the drug trade.

“I myself, who ordered the campaign against drugs, take full and sole responsibility for it,” he said, cautioning police against using excessive force in making arrests. “Do not kill if you’re not in danger of losing your life.”

While Mr. Duterte said he would not accuse De Lima of receiving the drug money from her driver, he said that “by the looks of it, she has it.”

He said the senator’s driver was accepting money from somebody in “Muntinlupa,” referring to New Bilibid Prison, where convicted drug lords were allegedly directing business from behind bars.

De Lima, justice secretary of former President Benigno Aquino III, has been at loggerheads with Mr. Duterte for a long time.

As chair of the Commission on Human Rights during the Arroyo administration, she had placed him under investigation for his supposed involvement with the Davao Death Squad (DDS) when he was mayor of Davao City.

Mr. Duterte had previously admitted that he was behind the DDS, a shadowy group of vigilantes that owned up to the extrajudicial killings in Davao City.

Despite allegations he was involved in summary executions, he had been elected half a dozen times, serving the city for over two decades.

De Lima’s actions against him evidently left a deep scar on the President. He recalled in his speech how she had once threatened to unmask him as protector of the DDS.

He said he was in possession of a CD (compact disc) containing the digital recording of the then CHR chair’s interview with the media before the start of the CHR investigation. In that interview, he said, De Lima told reporters that “I will prove that Duterte is connected with the DDS.”

“Until now, she keeps on yakking and has forgotten the tape which I have recorded,” the President said. “I would like her to eat it in (my) presence, but I could not do it because it’s not an accepted edible food for human beings.”

Director General Ronald dela Rosa, in his address at the Philippine National Police founding anniversary, vowed “no letdown” in efforts to go after criminals.”

“We will not stop combing streets and communities to detect illegal drug activities, arrest the culprits and give peace and safety to our citizens,” he said.

From July 1 to Aug. 11, Dela Rosa reported that the PNP had conducted 306,991 visits on houses of alleged pushers and users under Oplan Tokhang (“knock and plead”) to convince them to mend their ways.

As a result, 518,310 drug users and 45,799 suspected drug pushers had surrendered to authorities. There were also 7,830 arrests and 572 killed in antidrug operations, he said.

Dela Rosa said the PNP would also continue efforts to rid its ranks of those involved in illegal drugs and other crimes. Since the Duterte administration took over, 18 PNP personnel have been dismissed, two suspended and 37 cases filed while another 30 with supposed links to illegal drugs have submitted themselves for investigation.

Sen. Alan Peter Cayetano yesterday said that Mr. Duterte, during a meeting with senators in Malacañang on Monday, described the illegal drug problem as a “pandemic” and that he would not stop his name-and-shame campaign against officials involved in the narcotics trade.

“He has a new list. I assume they are done vetting. But he said this will continue.  Because it’s part of an intelligence gathering, vetting,” Cayetano said.

“The President did tell us that he will not stop from naming. But there’s a process. It’s not easy to be put on the list, and there’s a vetting system,” he added.

Sen. Juan Miguel Zubiri, among the seven senators in the meeting, said the President was “sickened to the core” at the level of official involvement in drugs.

“That’s why he was so frustrated that night. The magnitude of the problem is so immense. He actually joked “just impeach me so I can go back to Davao,” Zubiri said.

Sen. Ralph Recto, who was also present at the meeting, said Mr. Duterte even read out some of the names. He, however, did not share what he heard.

“What is clear is that the President is serious in fighting the drug problem,” Recto said. With reports from Tarra Quismundo, Jerome Aning, Jeannette I. Andrade/TVJ

WHAT WENT BEFORE: Davao Death Squad