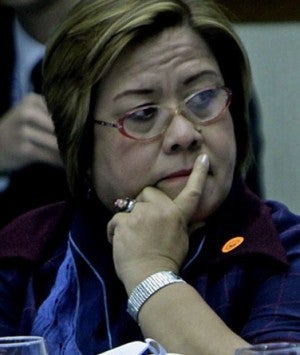 MANILA, Philippines—Justice Secretary Leila De Lima’s alleged illicit affairs with certain men, including a married driver, were named in an affidavit that Sandra Cam has submitted to the Commission on Appointments (CA) to oppose de Lima’s confirmation.

Cam, president of the Whistleblowers Association of the Philippines, was among those opposing De Lima’s confirmation.

In her 10-page affidavit submitted to the CA’s committee on justice Tuesday, Cam cited De Lima’s “controversial private life” as among the reasons why she was opposing her confirmation.

“De Lima’s personal life is likewise replete with controversies which overthrow her integrity as a public servant,” Cam said.

But these issues were not not brought up when the committee deliberated on De Lima’s confirmation his Wednesday.

De Lima had earlier told the media that she would not dignify any personal issues that  would be raised against her during  her confirmation hearing.

“Well, tingnan na lang natin but I’m not inclined to, you know, na patulan ang mga ganyan,” she told reporters before the start of the hearing.

(We’ll just see about that, but I’m not inclined to, you know, dignify those things.)