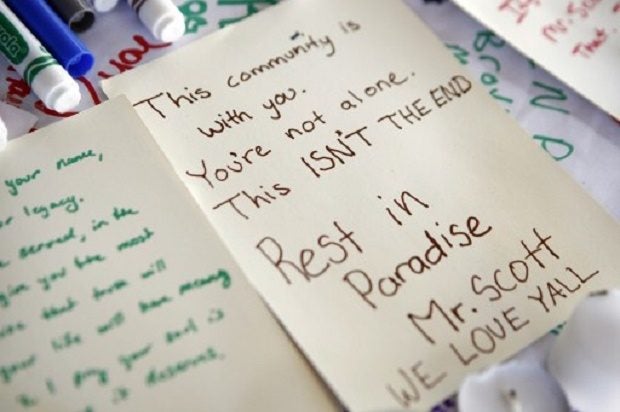 A collection of notes are left by concerned community members at a small memorial at the scene of the death of Keith Scott September 23, 2016 in Charlotte, North Carolina. Scott, 43, was shot and killed by police officers at an apartment complex near UNC Charlotte, sparking protests. AFP

CHARLOTTE, United States – The wife of the African American man whose death has triggered days of unrest in Charlotte, North Carolina, on Friday released dramatic video footage of the moments before and after he was shot by police.

Police in the city have so far refused to publicly release their own body-cam and dashcam footage that they say shows Keith Lamont Scott posed a threat to officers.

The smartphone footage filmed by his wife Rakeyia Scott, released by her lawyers to media including AFP, will add to mounting pressure on Charlotte authorities to make the video public.

The two-minute, 16-second clip does not show the shooting itself, but captures the moments leading up to it, as Scott’s wife pleads with officers not to open fire.

“He has a TBI, he’s not going to do anything to you guys,” she says, presumably referring to a traumatic brain injury.

Several neighbors have told AFP the 43-year-old Scott was disabled, and had a stutter among other issues.

“Don’t let them break the windows. Come on out the car,” she asks her husband.

“Keith. Don’t you do it,” she adds, a moment before the sound of four quick gunshots, at which point the phone is pointed away from the shooting.

Moments later, Scott is seen lying face down on the asphalt surrounded by officers.

Scott at this point is seen lying motionless on the ground.

“I’m not coming near you, I’m gonna record you,” his wife says.

“These are the police officers that shot my husband, and he better live. He better live, because he didn’t do nothing to them.”

The victim’s family, along with many in Charlotte, dispute the police assertion that Scott was armed with a handgun. His family says he was holding a book.

The smartphone video does not conclusively answer the question of whether he was armed or not.