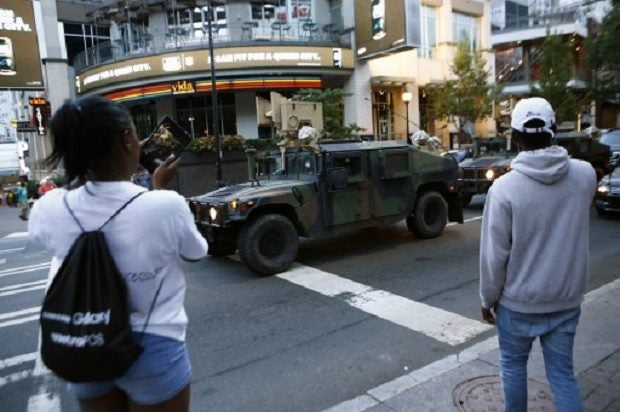 Residents take photos as the first Nation Guard troops pull into Uptown Charlotte September 22, 2016 in Charlotte, North Carolina. As activists continue to protest the death of Keith Scott, police prepare for another round of possible unrest. Scott, 43, was shot and killed by police officers at an apartment complex near UNC Charlotte. AFP

CHARLOTTE, United States – Hundreds of National Guard troops and police reinforcements converged on Charlotte Thursday, mobilized to prevent a third night of violent protests over the fatal police shooting of a black man.

The tense southern city was under a state of emergency amid growing complaints that the authorities were slow to respond to crowds protesting the death of Keith Lamont Scott, a 43-year-old African American, on Tuesday.

One person was shot and seriously wounded and 44 were arrested as the protests swept through downtown Charlotte late Wednesday and early Thursday, triggered by the latest in a string of police-involved killings of black men that have fueled outrage across the United States.

Nine protesters and two officers were hurt as clashes broke out with riot police firing tear gas, shutting down a transport hub in the city, officials said.

The seriously wounded protester died in the hospital on Thursday, local media reported. The city had said he was shot by a civilian, not police.

President Barack Obama spoke with Governor Pat McCrory for an update on the situation, the White House said.

“It is also important that people do not use public protest as an excuse to engage in violence or vandalism.”

“We are going to be a lot more proactive,” he told a news conference. “We made 44 arrests last night because we are not going to tolerate the behavior.”

Mayor Jennifer Roberts said earlier that a curfew was under consideration, but Putney said he did not intend to impose one unless “we need to clear the streets sooner.”

Scott was shot and killed in an apartment complex parking lot on Tuesday during an encounter with police officers searching for another person wanted for arrest.

Conflicting versions of what happened — police say Scott was armed with a handgun while his family says he was holding a book — fueled the angry protests.

The authorities have so far resisted mounting pressure to release police video of the incident, saying it would harm the investigation’s integrity.

However, members of Scott’s family were set to watch the video later Thursday, a lawyer for the family told reporters.

Putney has said a handgun was recovered at the scene, and that no book was found, contrary to the family’s assertion.

The video footage “does not give me absolute definitive visual evidence that would confirm that a person is pointing a gun,” he told CNN on Tuesday.

But later he said the footage indicates the officer identified as having shot Scott — Brentley Vinson, who is also black — was justified.

“If I felt laws were broken, I would have taken action by now,” he told The Charlotte Observer, referring to criminal charges against the officer.

However, the final determination about whether to charge Vinson will fall to the State Bureau of Investigation, which began investigating the shooting on Thursday.

Although Wednesday night’s protest started with a peaceful vigil for Scott, the atmosphere changed dramatically when demonstrators marched to the police headquarters and a protester pulled the American flag to the bottom of its flagpole.

By the time the protesters walked the few blocks to uptown and encountered riot police standing like statues on Trade Street, the marchers were seething.

Some stood on cars and hurled rocks and bottles at police, who responded by firing tear gas, which sent the crowd scattering.

Basketball legend Michael Jordan, who owns the Charlotte Hornets NBA team, issued a statement appealing for calm. “It is more important than ever that we restore calm and come together,” he said, “in constructive and non-violent ways.”

Scott’s shooting came on the heels of another fatal police shooting of a black man, Terence Crutcher, on Friday in Tulsa, Oklahoma.

The troubles in Charlotte reverberated on the US presidential campaign trail, with Republican candidate Donald Trump suggesting that drug use in the inner city was somehow responsible.

“And if you’re not aware, drugs are a very, very big factor in what you’re watching on television at night,” he said during a speech in Pittsburgh.

Democrat Hillary Clinton discussed the unrest in calls Thursday to the Charlotte mayor and US Congresswoman Alma Adams, her campaign said.

“Too many black Americans have lost their lives and too many feel that their lives are disposable,” the campaign cited her as saying.

“There are good, honorable police officers serving their communities across our country, and we must all work together to mend the wounds that exist and build the America we want our children and grandchildren to grow up in.”