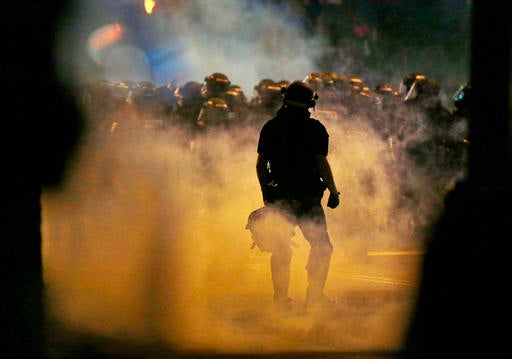 Police fire teargas as protestors converge on downtown following Tuesday’s police shooting of Keith Lamont Scott in Charlotte, N.C., Wednesday, Sept. 21, 2016. Protesters have rushed police in riot gear at a downtown Charlotte hotel and officers have fired tear gas to disperse the crowd. At least one person was injured in the confrontation, though it wasn’t immediately clear how. Firefighters rushed in to pull the man to a waiting ambulance.AP Photo

CHARLOTTE, North Carolina — Authorities tried to quell public anger and correct what they characterized as false information Wednesday as Charlotte dealt with a second night of violent protests, adding itself to the list of U.S. cities that have erupted in violence over the death of a black man at the hands of police.

One man was shot and killed as protesters gathered near police in riot gear at an upscale downtown Charlotte hotel Wednesday night. The man was not shot by a police officer, the city of Charlotte said on Twitter.

A short time later, police began firing flash grenades at protesters who were throwing fireworks at them. They then fired tear gas at the hundreds of protesters, dispersing most of the crowd.

With officials refusing to release any video of the Tuesday shooting of 43-year-old Keith Lamont Scott, anger built as two starkly different versions emerged: Police say Scott disregarded repeated demands to drop his gun, while neighborhood residents say he was holding a book, not a weapon, as he waited for his son to get off the school bus.

The killing inflamed racial tensions in a city that seemed to have steered clear of the troubles that engulfed other places.

Police in riot gear then began marching arm in arm through downtown Charlotte intersections, shooting tear gas at people who charged them. At least one protester knocked down a reporter during a live shot.