US city braces for unrest after police kill black man 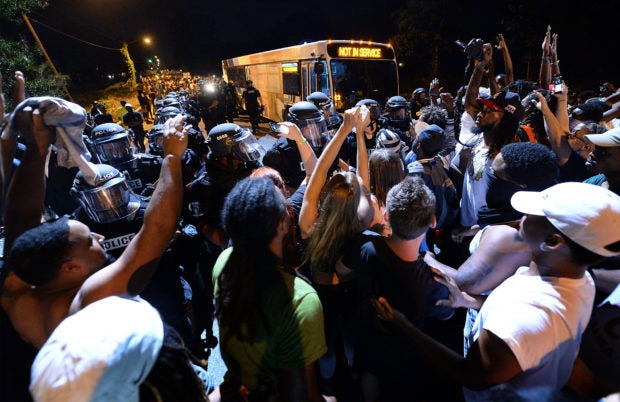 Protesters clash with police in Charlotte, North Carolina on Tuesday, Sept. 20, 2016. Authorities used tear gas to disperse protesters in an overnight demonstration that broke out Tuesday after Keith Lamont Scott was fatally shot by an officer at an apartment complex. (Jeff Siner/The Charlotte Observer via AP)

CHARLOTTE, United States — The southern US city of Charlotte, North Carolina, braced for a possible new flare-up of violence on Wednesday ignited by the fatal police shooting of a black man.

The city bolstered its police presence and authorities shut down Epicenter, an area of bars and restaurants. A downtown Bank of America branch sent employees home early to avoid potential unrest.

Keith Lamont Scott, 43, was shot dead in an apartment complex parking lot on Tuesday after an encounter with officers searching for a suspect wanted for arrest.

Authorities said 16 officers and several demonstrators were injured in clashes overnight Tuesday following Scott’s death, the latest in a string of police-involved killings of black men that have fueled outrage across the United States.

Presidential candidates Donald Trump and Hillary Clinton were quick to weigh in on the violence in Charlotte. It came on the heels of another fatal police shooting of a black man on Friday in Tulsa, with the death of Terence Crutcher captured on video.

“Keith Lamont Scott. Terence Crutcher. Too many others. This has got to end. -H,” tweeted Democrat Clinton, signing the post herself.

After calling to “make America safe again” in a tweet, Trump suggested later Wednesday that the Tulsa officer who shot Crutcher had “choked.”

“I don’t know what she was thinking,” the Republican said, speaking at an African-American church in Cleveland, Ohio.

The Charlotte shooting took place at 4:00 pm (2000 GMT) Tuesday as officers searching for a suspect arrived in the parking lot of an apartment complex.

They spotted a man with a handgun — later identified as Scott — exit and then reenter a vehicle, Charlotte-Mecklenburg police chief Kerr Putney told journalists.

Officers approached the man and loudly commanded him to get out and drop the weapon, at which point Scott exited the vehicle armed, according to police.

“He stepped out, posing a threat to the officers, and officer Brentley Vinson subsequently fired his weapon, striking the subject,” the police chief said.

However, Putney added that he did not know whether Scott “definitively pointed the weapon specifically toward an officer.”

Scott’s relatives told local media that he was waiting for his young son at school bus stop when police arrived. He was not carrying a gun but a book when he was shot dead, they said — an account police disputed.

“I can tell you a weapon was seized. A hand gun,” Putney said. “I can also tell you we did not find a book that has been made reference to.”

Anger was simmering in Charlotte, especially over the police chief’s assertion that Scott had been armed.

“It’s a lie,” said Taheshia Williams, whose daughter attends school with the victim’s son. “They took the book and replaced it with a gun.”

“I do this for hope,” one protester called out. “I do this because I’m tired of being silent,” another said.

One man held a sign reading “Legalize being black.”

Protests had swelled Tuesday evening as news of the shooting spread, with demonstrators carrying signs that read “Black Lives Matter” and chanting “No justice, no peace!”

A group of protesters nevertheless marched to a major highway early Wednesday, shutting down traffic in both directions. They broke into the back of truck and set goods on fire, according to police.

The 40-year-old is seen with his hands up, appearing to comply with police officers before he is shot once by officer Betty Shelby and falls to the ground. Another officer fires his stun gun.

The US Department of Justice said Monday it would conduct a federal civil rights probe into the Tulsa shooting, parallel to an investigation being carried out by local authorities.