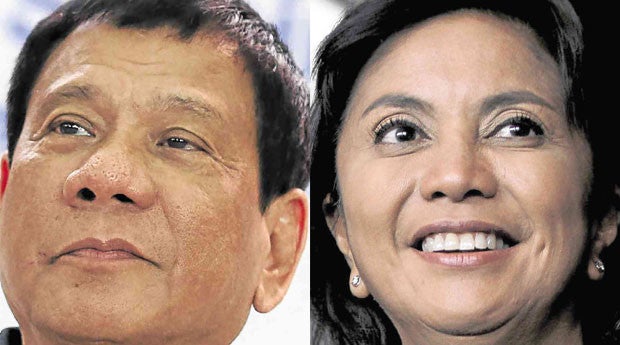 All votes are in and counted, and the figures show “The Punisher” is the next President of the Philippines.

To serve as his partner in running the government is a young widow and political neophyte.

Davao City Mayor Rodrigo Duterte polled more than 16 million votes in the May 9 elections, based on the official canvassing results, while Camarines Sur Rep. Leni Robredo edged out Sen. Ferdinand “Bongbong” Marcos Jr. by 263,473 votes in the tightly contested race for the vice presidency.

READ: Leni: Jesse is with me throughout the journey

After a swift, three-day canvassing, Congress, sitting as the national board of canvassers (NBOC), completed the count early Saturday night.

Duterte and Robredo will be proclaimed as winners of the presidential and vice presidential elections on Monday, after a joint session of Congress approves the report of the joint canvassing committee, according to Sen. Aquilino Pimentel III, chair of the Senate panel.

Duterte, called “The Punisher” by Time magazine for his iron-fisted rule in Davao City, where he has been mayor for two decades, got 16,601,997 votes, surpassing the 15,208,678 votes polled by President Aquino in the 2010 elections.

Duterte’s camp hailed the results of the official count Saturday night and urged the nation to unite for the achievement of his promised change.

“Finally, victory has been achieved,” Peter Laviña, spokesperson for Duterte’s campaign, said in a statement.

“The official results of the 2016 presidential race with Rody Duterte as winner may be anticlimactic, but we should not lose its historic significance,” he said, referring to the long-known, unofficial results that showed the Davao mayor winning an overwhelming mandate.

Laviña called Duterte’s landslide victory “the triumph of the people.”

“Let us celebrate this milestone in Philippine democracy by uniting and working for genuine change,” he said.

Bong Go, Duterte’s executive assistant, said the incoming President would not be present at his proclamation on Monday.

Duterte was elected on an anticrime platform that included promises of mass killings of suspected criminals, the restoration of the death penalty with hanging as the preferred mode of execution, and a top-down reorganization at all law-enforcement agencies.

Although derided by some of his rivals as a “joke,” Duterte captured the admiration of millions of Filipinos tired of rampant crime and corruption with his street-level style of campaigning, delighting them with his expletive-laden speeches and promises of wiping out criminality within three to six months of being elected by killing tens of thousands of suspected criminals and dumping their bodies in Manila Bay, where the fish, he said, would grow fat from feeding on the corpses.

From unknown to VP

Robredo’s victory could be described as a come-from-behind win. She entered the vice presidential race as a virtual unknown, as she was a first-term representative of Camarines Sur province and was better known as  the widow of former Interior Secretary Jesse Robredo.

But during the campaign, her poll numbers climbed steadily until the last surveys before Election Day showed her and Marcos in a neck-and-neck race.

At the start of the unofficial count of the votes by the election watchdog Parish Pastoral Council for Responsible Voting (PPCRV) after the polls closed on May 9, Marcos, son and namesake of the late dictator Ferdinand Marcos, appeared to be headed for victory with a huge lead over Robredo.

As the count progressed, however, Robredo surged and overtook Marcos, and the unofficial count ended last week with the administration candidate leading the senator by more than 200,000 votes.

Saturday night’s final, official count confirmed the PPCRV count. But George Garcia, a lawyer for Marcos, said the senator was considering filing an electoral protest because of “irregularities” his camp observed during the elections.

Among the issues Marcos’ camp might raise in the protest were the nearly 4 million undervotes for Vice President the senator’s lawyers noted during the official canvassing, Garcia said.

He said it was unlikely that so many voters would not choose a Vice President.

READ: Marcos camp ‘respects’ process, but preparing for next move

Garcia said another possible basis for the electoral protest was the zero votes Marcos got in areas where there were a lot of Iglesia ni Cristo followers.

The homegrown Christian sect, whose followers vote as a bloc, had endorsed Marcos for Vice President, Garcia said.

“He was carried by the Iglesia ni Cristo and we doubt that they would not vote for [him]. They might be expelled,” he said.

Other issues that Garcia said Marcos’ camp might raise were the malfunctioning vote-counting machines and the report that defective consolidation and canvassing servers were brought to the Commission on Elections (Comelec) warehouse in Santa Rosa, Laguna province, which raised suspicions of possible tampering.

Garcia said the issues the Marcos camp had found were not in the certificates of canvass (COCs), but in how the elections were conducted, the reason the senator’s lawyers did not seek to delay the canvassing of votes.

Garcia noted that in Nueva Ecija and Ilocos Sur provinces, the provincial canvassing and consolidation system (CCS) transmitted the COCs even if not all municipalities had transmitted results.

“How can the provincial CCS transmit [the COC] to the Comelec when the program says it should be 100 percent transmission of all municipalities in that province?” he said.

“How can this happen when Smartmatic assured us that their machines are accurate and reliable?” he added.

Garcia said the Marcos camp was gathering evidence, in case it would proceed with an electoral protest.

Marcos was at the top spot in the vice presidential race at the end of the second day of canvassing on Thursday, at one point enjoying a 2-million-vote  lead, but Robredo overtook him yesterday after the votes from Iloilo City, Maguindanao, Lanao del Sur, and Northern Samar were counted.

Even after the counting of the votes for overseas absentee and local absentee voting, where Marcos led, Robredo kept her lead.

The 2016 elections had a record voter turnout of 81 percent, the highest in the country’s three automated elections. There were 54.5 million registered voters this year.

The transmission of results to the Comelec server was also the fastest recorded, with 70 percent of results transmitted just four hours after the polls closed at 5 p.m. on May 9.

The Philippine population has grown since 2010, which also accounts for Duterte getting a higher number of votes.

Under the rules of the NBOC, the canvassing panel will produce a joint committee report that it will submit to the joint public session of the Senate and the House of Representatives for approval.

The report will be presented by a member of the committee during the session, along with a resolution of both houses declaring the results of the canvass and proclaiming the President-elect and Vice President-elect.

A speaker for each candidate will also be given the chance to speak for more than five minutes.

Despite Go’s announcement that Duterte was not going to attend the proclamation, the mayor’s allies were bent on convincing him to show up and were optimistic that he would.

Paola Alvarez, spokesperson for Duterte’s party PDP-Laban, said the mayor’s allies were talking to him about the matter.

Alvarez noted that Duterte’s remark about skipping the proclamation was made haphazardly. With a report from Tarra Quismundo/TVJ