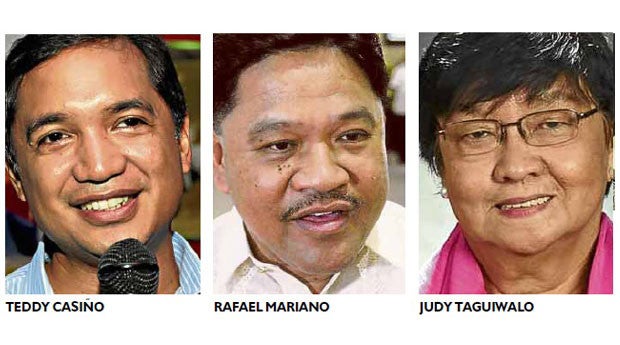 DAVAO CITY—Presumptive President-elect Rodrigo Duterte is considering appointing four women to his Cabinet who will be drawn from what he called an “impressive” list of 10 nominees submitted by the National Democratic Front of the Philippines (NDFP).

“The Left has given an impressive list of people who have the talent. I am inclined to give in,” Duterte told reporters in a midnight news conference in Davao City on Thursday.

Of the 10 people on the NDFP list, Duterte said four were women. He did not release their names, as “if it does not push through, it might embarrass them.”

The source said Zarate backed out, adding he would be replaced on the list by former Bayan Muna Rep. Teodoro Casiño.

Casiño served in the House of Representatives from 2007 to 2013. He advocated the lowering of prices of electricity, oil and water as well as regulation in the price of education, healthcare, mobile communications, tolls and other utilities and services.

Casiño ran for a Senate seat in 2013 but lost because he could “not overcome the obstacles of traditional, patronage politics.”

Duterte has already appointed Bello as his labor secretary.

Bello served as solicitor general during the Ramos administration, from September 1996 to February 1998 and again on June 9-30, 1998.

He was also appointed secretary of justice in July 1990. Prior to that, he was ex-officio commissioner of the Housing and Land Use Regulatory Board and director of the Dangerous Drugs Board.

Bello is a known human rights lawyer in Davao. He was among those who helped defend former priest and rebel Leoncio “Jun” Evasco, who became Duterte’s city administrator.

Mariano is the national chair of Kilusang Magbubukid ng Pilipinas. He previously served as the group’s first secretary general, in 1985-1990, and vice chair, in 1990-1993.

He was elected chair of Bagong Alyansang Makabayan (Bayan), serving from 1998 to 2004. He served one term as representative of the Anakpawis party-list group in the House, from 2004-2007.

Mariano was part of the “Batasan 5,” which included fellow militant lawmakers Satur Ocampo, Casiño and Joel Virador of Bayan Muna, and Liza Maza of Gabriela.

They were among 16 people charged with plotting to overthrow the Arroyo administration.

In May 2006, the five lawmakers, who claimed to be victims of political persecution, appealed to be placed under the protective custody of the House to evade warrantless arrest following then President Gloria Macapagal-Arroyo’s declaration of a state of national emergency under Proclamation No. 1017, ostensibly to crush threats from both the extreme Left and the extreme Right.

Taguiwalo is a retired professor at the Women and Development Studies Department in the University of the Philippines in Diliman.

She heads the Women’s Committee of the Alliance of Concerned Teachers, a national organization of teaching and nonteaching staff. She is also an officer of the Asia-Pacific Forum on Women, Law and Development.

Taguiwalo was also the founding national president of All-UP Academic Employees Union, the union of rank-and-file faculty and nonteaching academic personnel of UP.

She was a political prisoner during the martial law period and spent over three years in various prisons in the country for resisting the Marcos dictatorship.

“I have submitted the documents to a screening committee. The reason why I am talking to them is, I was once upon a time left of center,” said Duterte, who is offering Cabinet positions in his incoming administration to communist rebels as a confidence-building measure for resuming peace talks with the NDFP.

Peace talks with the NDFP has been largely stalled during the Aquino administration.

Duterte earlier said that he was opening the environment post to nominees of the NDFP. On Wednesday, however, he said he was taking back his offer because he now wanted a military man who could use force to regulate the mining industry.

“Initially, I said DENR is for the Left, but I forgot we’ve got a very serious problem in mining,” Duterte said. “The oligarchs are really abusing the land. They will destroy the land, and they will stop only if they get billions.”

He said that if necessary, he would use the military to shut down mining operations.

The Inquirer source said the NDFP had nominated Zarate for the environment post, but replaced him with Casiño after he backed out.

But with Duterte’s preference for a military man for the environment post, Casiño may be considered for another position.

Duterte said he was open to offering more positions not just to progressive groups but also to top communist leaders if the peace process made progress.

“If we can talk smoothly, and Joma (Communist Party of the Philippines founder Jose Maria Sison) will come home in July, I am ready to give all (communist) leaders positions,” he said.

At one of the presidential debates during the campaign, Duterte said he might appoint a woman to the tourism portfolio, “or finance if she’s really smart.”

But the finance job went to Carlos “Sonny” Dominguez, who was appointed last week.

One woman, so far

So far, Duterte has selected only one woman, former Immigration Commissioner Andrea Domingo, to join his Cabinet.  She will head state-run Philippine Amusement and Gaming Corp. (Pagcor).

Duterte has also appointed his classmates Vitaliano Aguirre as justice secretary and Arthur Tugade as transportation and communication secretary.

Duterte said he would meet with his Cabinet in Davao next week.

“I’ll be meeting them all as a group for the first time. I want a Cabinet that is not hostile to  each other,” he said.

Duterte said he wanted his Cabinet officials to “work and give the people their money’s worth.”

He said he wanted to make his six years as President a “reconciliatory reign.”

“By the time I step down as President, there will be no Left, no Right, Moro or Christian, so we can build the nation in peace,” he said. With reports from Aries Joseph Hegina, Inquirer.net; Inquirer Research; and Karlos Manlupig, Inquirer Mindanao

What happened to ‘bright, young’ people in Duterte’s Cabinet?