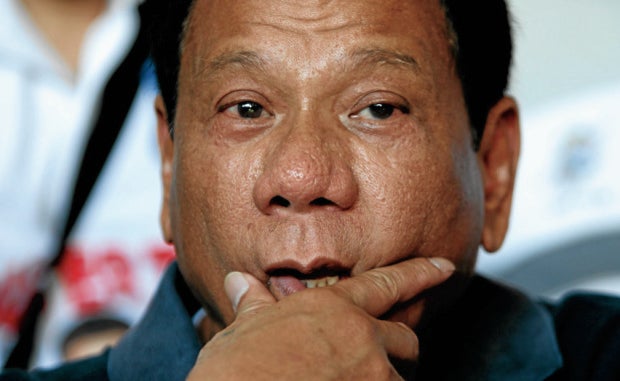 Davao City Mayor Rodrigo Duterte has brushed off controversies over an alleged hidden wealth and a rape joke to keep a huge lead going into the final days of the presidential election campaign, according to pollster Social Weather Stations (SWS).

The results of the last SWS preelection poll released Friday showed Duterte leading the race for Malacañang with voter support of 33 percent.

Polled were 4,500 registered voters and the results had a margin of error of plus-or-minus 1 percentage point.

The son of the late dictator Ferdinand Marcos had 29 percent voter support against 28 percent for the LP’s Robredo.

In the previous poll conducted on April 18-20, Robredo and Marcos were also in a statistical tie. Robredo had voter support of 26 percent against 25 percent for Marcos.

Escudero’s latest score was down 3 points from 18 percent, while Cayetano’s declined by 3 points from 16 percent. Honasan’s rating went up by a point from 2 percent and Trillanes’ down 2 points from 5 percent.

“It seems that Mayor Rodrigo Duterte remains unscathed despite issues against him,” said Richard Javad Heydarian, a political science assistant professor at De La Salle University. “It seems that his support is solid and he has not many ‘soft supporters.’”

Heydarian noted that Duterte has done “a splendid job” at winning the “perception game” that is the elections. “He really presented himself as the authentic candidate, the candidate for real change,” he said.

But Heydarian also noted that the results reflected voter preference at the time of the survey. “They don’t say whether they will vote the same way on May 9—or if they will vote at all.”

In the event of a low voter turnout, Duterte may be the likely loser, he said. “The challenge for Duterte is to translate the excitement he generated on the campaign trail into actual votes.”

Heydarian said participation of middle-class voters, among whom Duterte is popular, is crucial. “The question is: Will they really come out and vote?”

Heydarian also noted that the shifting numbers of Poe and Roxas have made it difficult to create an “anti-Duterte coalition.”

“Poe is the wild card. If she wins, it may actually be a more acceptable, less polarizing result,” he said. “Roxas winning is a long shot, but he is benefiting from the anti-Duterte hysteria by positioning himself as protector of democracy.”

“This is a very contentious election—the most polarizing in recent history,” Heydarian added. “It is worrisome regardless of the results.”

The latest ratings of Duterte and Santiago were unchanged from an earlier poll conducted on April 18-20. Roxas’ score climbed by a point from 19 percent, support for Poe was down 2 points from 24 percent and preference for Binay decreased by a point from 14 percent.

Prior to the survey period, Duterte faced a barrage of last-minute attacks over allegations he hid millions of pesos in undisclosed bank accounts, while his critics repeatedly warned he was a dictator in the making.

READ: Duterte: Yes, I’m a dictator, so what?

A confessed serial adulterer, the 71-year-old also generated outrage last month when he joked at a campaign rally that he had wanted to be the first to rape an Australian missionary who was sexually assaulted and murdered in a 1989 prison riot in Davao City.

As with other controversies, which included calling Pope Francis a “son of a bitch,” none appears to have impacted Duterte’s popularity to voters, going by the latest SWS poll.

Poe, until recently the front-runner, said she continued to hope the numbers would change on Monday, as the survey showed her with improving numbers in Metro Manila and Luzon.

Still, she said she was at peace and ready to accept the people’s decision, and happy that she waged a decent campaign.

“We continue what we are doing. We cannot lose hope just because of the results. But, of course, we wish that would change,” Poe told reporters.

“I am at peace. This fight is not just for myself. I’ve presented issues to the people. I fought for them on my platform,” she said. “But in the end they will be the ones to decide. Whatever that decision is, I am ready to accept it.”

Speaking at a grand rally in Naga City on Thursday night, Roxas, President Aquino’s chosen candidate, appealed to voters to rally behind him and Robredo.

Robredo said the dream of the people of Bicol of electing a Vice President was within reach, but the region had to unite behind her candidacy.

Heydarian said Robredo’s rise was due to her robust far-reaching machinery.

“Leni is in a better position to win,” he said. “It seems that she is benefiting from voters who may think that a Duterte presidency is inevitable.”

READ: LOOK: Fidel Ramos wants Robredo to be the next Vice President/ ‘May the best woman win’ / If she wins as VP, Robredo to ask President to hire new talents for DOTC

President Aquino was also in the Naga rally and he again raised the specter of a return of dictatorship should Duterte win the election.

Mr. Aquino reminded the crowd of about 10,000 of Duterte’s statements that if elected, he would shut down Congress if anybody there moved for his impeachment.

In a rally in Ligao City in Albay province on Thursday afternoon, Mr. Aquino said Duterte, being a lawyer, should know the Constitution, which provides for the separation of powers between the executive, legislative and judiciary.

Binay received a boost on Friday, with the Catholic lay movement El Shaddai endorsing his candidacy for President, according to the Vice President’s spokesperson, Joey Salgado.

“The radio station of El Shaddai, dwXI 1413, has announced the endorsement of Vice President Jejomar Binay as its candidate for President,” Salgado said.

Quoting the El Shaddai announcement, Salgado said “the choice of Vice President Binay was almost unanimous,” reached during consultations within the group.

The endorsement came five days after Binay, Poe and Roxas joined an El Shaddai overnight vigil, apparently seeking the endorsement of the group.

In a statement, Binay, who earlier gained the support of prolife groups and Catholic lay organizations, thanked the group led by Mike Velarde and promised to offer his leadership to God.

“I am grateful and humbled by the endorsement of the members of El Shaddai and to Bro. Mike Velarde for giving me the opportunity to speak before his congregation,” Binay said, referring to his appearance at the El Shaddai gathering last Sunday.

There is no Catholic vote in the Philippines. On Thursday, Manila Archbishop Luis Antonio Cardinal Tagle said the Catholic Bishops’ Conference of the Philippines remained firmly opposed to endorsing candidates as its way of showing respect for Catholics’ own choice of leaders.

But there is an Iglesia ni Cristo (INC) vote and it is going to Duterte.

On Wednesday night, during worship service, INC executive minister Eduardo Manalo exhorted his 2.25 million followers to vote as one.

He said a list of national and local candidates that the sect’s members would vote for would be sent to them before Monday’s vote.

INC members began circulating a sample ballot on social media that morning showing the names of Duterte and Marcos as the sect’s choices for President and Vice President. With reports from Leila B. Salaverria and Tarra Quismundo; Juan Escandor Jr. and Mar S. Arguelles, Inquirer Southern Luzon; and AFP