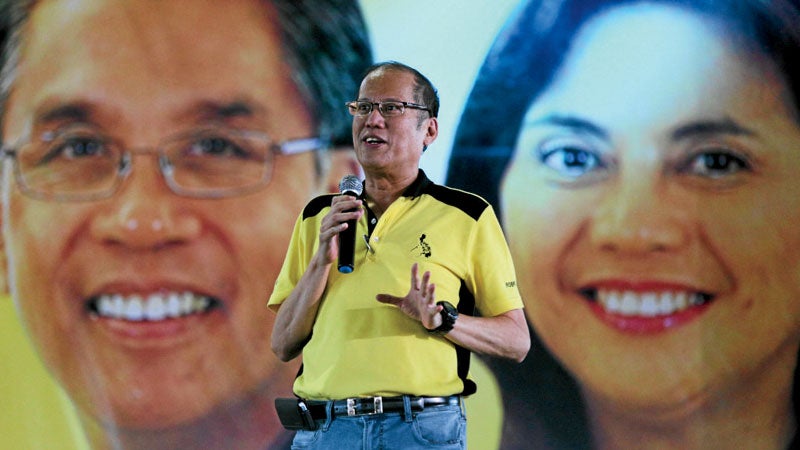 PRESIDENT Aquino on Monday urged Filipinos to vote on May 9 for the candidates who deserve to win and not because they are popular or are leading in surveys.

In a speech in Tuguegarao City hours after he met with Iglesia ni Cristo leader Eduardo Manalo, Mr. Aquino addressed those who have yet to make their choice on Election Day, and even those whom he described as “losing their way,” urging them to choose to continue his administration’s daang matuwid (straight path).

“Let’s not vote for the person because he is popular, for the person who sings well, for someone full of surprises. No,” the President said in Filipino.

Duterte is campaigning on an anticriminality, anticorruption platform, telling the public that there is a crisis in law and order that there is a need for an iron fist to stop lawbreakers.

However, with less than a week before Election Day, Duterte has yet to present clear economic, foreign, and security policies.

“I suppose a lot of us are thinking too: If you cuss, will that bring food on the table of the Filipino? If you challenge anyone left and right, will that get you allies? We have a problem with the West Philippine Sea. If you do not give your full answer when you are asked, what can we expect from you once you are in power?” Mr. Aquino said.

“As I have said, this election is a referendum. Did we do right with Daang Matuwid or not?” he asked.

Then, as he does in every stump speech he has given since February, the President made a rundown of what he said his administration had achieved: 7.7 million individuals have crossed the poverty threshold; 93 million PhilHealth beneficiaries; 4.6 million households under the conditional cash transfer program; lowest unemployment rate and a 6.2 percent average annual growth in gross domestic product (GDP), the biggest since the 1970s.

“Monday’s elections should not be joked about. We cannot say that maybe the opponents of Mar Roxas might be true to their promises; that they might know what they are doing; that they might turn out to be right. Why would we settle for uncertainties if we can be sure with Mar Roxas and Leni Robredo,” the President said.

On Tuesday, Cotabato Archbishop Orlando Cardinal Quevedo also said voters should not be “mesmerized by surveys and claims of change by any means.”

The cardinal said in a circular, which contained his six-point guidance to  voters in the archdiocese, that voters should carefully examine their choices.

“Is the candidate a person of moral integrity?” Quevedo asked, adding that corruption remained a plague in the country.

Billions of pesos go into private pockets every year instead of being spent to uplift the poor, he said. “Select a candidate that is not tainted by  corruption, unexplained wealth and properties,”  he said.

Quevedo said voters should choose candidates who respected and defended the right to life.

“Life is most sacred, a very precious gift of God. The right to life includes the right of the unborn, of the terminally ill, of innocent  people, even of suspected or convicted criminals, of the old and the dying,” he said.