Leni up 4, Bongbong down 3, for virtual tie in latest Pulse 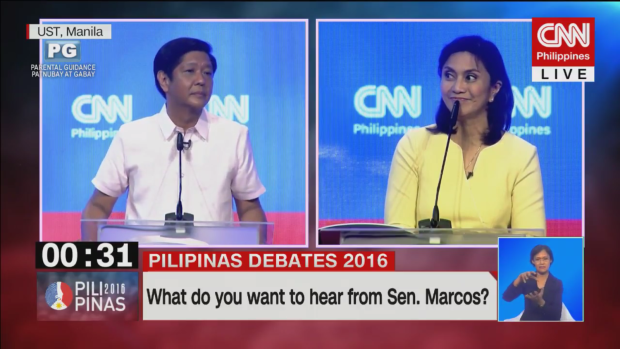 The race for vice president has tightened. In the latest Pulse Asia survey commissioned by the ABS-CBN network, erstwhile solo leader Sen. Bongbong Marcos slipped three percent while Rep. Leni Robredo gained four, to share the lead for the first time since the survey firm began tracking the 2016 campaign.

The April 26 – 29 poll found that 30 percent of survey respondents favored Robredo, up from 26, while 28 percent said they would vote for Marcos, down from 31, if the elections were held that week.

The survey has a sample size of 4,000 voting-age respondents who had registered for the elections with their biometrics; it has a sampling margin of error of plus or minus 1.5 percent.

Robredo and Marcos were also locked in a virtual tie for first place in the April 18-20 Social Weather Stations survey — the first time Robredo took the nominal lead in a major face-to-face poll. The running mate of Liberal Party standard bearer Mar Roxas recorded a 26 percent voter preference rating in that survey, up seven points, to share the lead with the running mate of Sen. Miriam Defensor Santiago, who had 25 percent.

In the latest Pulse Asia poll, Marcos topped the largest geographic voting bloc, Balance Luzon, at 33 percent; he also dominated the National Capital Region, with 42 percent. Robredo claimed top spot in the Visayas, with 42 percent; while she (28 percent) and Marcos (24) shared a virtual tie in Mindanao with Cayetano (29).