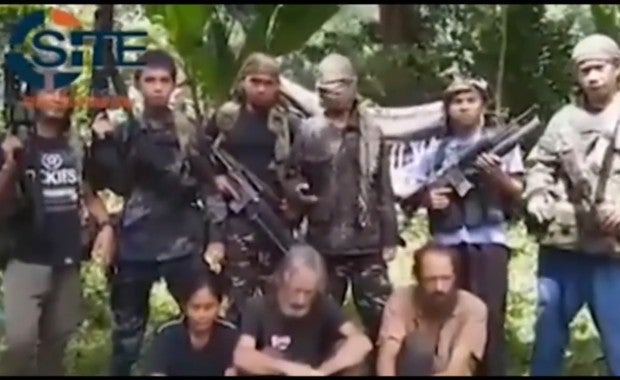 After beheading Canadian John Ridsdel last week, the Abu Sayyaf released a video of its three remaining hostages they kidnapped at a marina on Samal Island in September 2015.

In the video that circulated online on Tuesday, the three hostages — one Canadian, one Norwegian and a Filipina — pleaded to the Canadian and Philippine governments to meet the demands of the militant group.

Surrounded by six armed men, Norwegian Kjartan Sekkingstad was the first to speak in the video: “I’m appealing to the Canadian government, Philippine government, friends, family, anybody who can possibly help us if the demands are not met we will be executed like my friend John a few days ago.”

Robert Hall, the other Canadian who was taken hostage, asked Philippine security forces chasing the militants to stop firing at them.

“Please stop shooting at us trying to kill us. These guys are gonna do a good job of that. To the Canadian government I’m told to tell you to meet the demands. I don’t know what you’re doing but you’re not doing anything for us. John is being sacrificed, his family has been decimated and I’m not sure why or what you’re waiting for,” he said.

Filipina Marites Flor, asked for help to the Philippine and Canadian governments, presidentiables and celebrities for financial help.

The Abu Sayyaf, which has pledged alliance to the Islamic State, is asking for P300 million for each of the foreign hostages.

“To the Philippine government and Canadian government, the lesson is clear: John Ridsdel has been beheaded now there are three remaining captives here. If you procrastinate once again the negotiations, we will behead all these anytime,” one of the militants in the video said.

Canadian John Ridsdel, who was taken with the three remaining hostages seven months ago, was beheaded a few hours after the 3 p.m. deadline set by the Abu Sayyaf on April 25. His severed head was found in one of the streets on Jolo island in Sulu.