If she wins as VP, Robredo to ask President to hire new talents for DOTC | Inquirer News
Close
menu
search

If she wins as VP, Robredo to ask President to hire new talents for DOTC 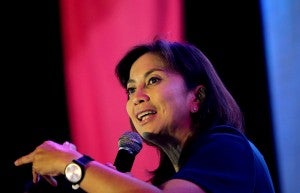 MANILA — The next Cabinet member to lead the Department of Transportation and Communications should be a new face with a different perspective, according to the Liberal Party vice presidential candidate, Camarines Sur Rep. Leni Robredo.

If she won as vice president and if she were to be asked by the next President who should lead the problem-plagued DOTC, Robredo said on Sunday that the new Chief Executive should no longer get from President Aquino’s old cabinet.

“We should not hire those who previously held Cabinet positions,” Robredo said during the vice presidential debate organized by the television network ABS-CBN.

Robredo said someone who had held the position for so long would not have a fresh perspective of problems.

Robredo said she would suggest to the President to create a search committee that would screen candidates. “Karanasan ang dapat kinokonsidera (Experience should be considered),” Robredo said.

Robredo did not specifically mentione DOTC secretary Joseph Emilio Abaya who has been hounded by resignation calls for the repeated breakdown of the Metro Rail Transit.  SFM