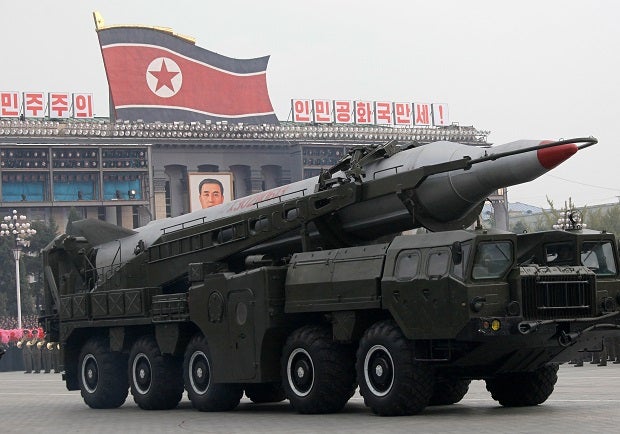 In this Oct. 10, 2010 file photo, North Korea missiles on trucks make their way during a massive military parade to mark the 65th anniversary of the communist nation’s ruling Workers’ Party in Pyongyang, North Korea. Nuclear-armed North Korea has hundreds of ballistic missiles that can target its neighbors in Northeast Asia but it will need foreign technology to upgrade its arsenal and pose a more direct threat to the United States, U.S. researchers said Tuesday. AP

WASHINGTON, United States — Nuclear-armed North Korea already has hundreds of ballistic missiles that can target its neighbors in Northeast Asia but will need foreign technology to upgrade its arsenal and pose a more direct threat to the United States, U.S. researchers said Tuesday.

Those are the latest findings of a research program investigating what secretive North Korea’s nuclear weapons capability will be by 2020.

Unlike Iran, the current focus of international nuclear diplomacy, North Korea has conducted atomic test explosions. Its blood-curdling rhetoric and periodic missile tests have set the region on edge and there’s no sign of negotiations restarting to coax it into disarming.

For now, the emphasis is on sanctions and military preparedness. Defense Secretary Ash Carter visits Japan and South Korea this week amid speculation the U.S. wants to place a missile defense system in South Korea against North Korean ballistic missiles, which Seoul is reluctant about as it would alienate China. The U.S. has already deployed anti-missile radar in Japan.

U.S. military officials have expressed growing concern about North Korea’s capabilities. Navy Adm. William Gortney, commander of U.S. Northern Command and the North American Aerospace Defense Command, told reporters Tuesday that it is the U.S. assessment that North Korea has the ability to miniaturize a warhead to put on an intercontinental ballistic missile.

U.S. officials are most concerned about a long-range missile called the KN-08 that has been displayed in military parades. It is said to be capable of being launched from a road-mobile vehicle and would therefore be difficult to monitor via satellite.

But the research published Tuesday by the North Korean Futures Project stresses that for now the principal threat from North Korean missiles is to its neighbors in Asia. The project is conducted by the U.S.-Korea Institute at John Hopkins School of Advanced International Studies and National Defense University’s Center for the Study of Weapons of Mass Destruction.

Aerospace engineer John Schilling and a research associate at the institute, Henry Kan, say Pyongyang’s current inventory of about 1,000 missiles, based on old Soviet technology, can already reach most targets in South Korea and Japan.

“North Korea has already achieved a level of delivery system development that will allow it to establish itself as a small nuclear power in the coming years,” they write in a paper published on the institute’s website, 38 North.

Despite the North’s 2012 success in launching a rocket into space — the clearest sign yet it has the potential to reach the American mainland — Pyongyang faces greater technical challenges in launching an effective missile across the Pacific at the U.S.

It may already be able to field a limited number of long-range Taepodong missiles in an emergency but they would be unreliable, vulnerable to pre-emptive strike and inaccurate, the analysis says. The KN-08 may achieve “emergency operational status” by 2020, before or with very limited flight testing, it adds.

The analysis says foreign assistance could be critical for overcoming the technological and engineering hurdles North Korea now faces in developing better missiles, including progress on high-performance engines, heat shields, guidance electronics and rocket motors that use solid fuel instead of liquid fuel, it says.

And that’s become tougher as North Korea’s international isolation has intensified since its first nuclear test explosion in 2006.

That hasn’t stopped its nuclear program. According to a recent estimate by the Washington-based Institute for Science and International Security, the North likely has enough fissile material for at least 10 weapons, and that could increase to between 20 and 100 weapons by 2020.

But whereas the basic designs and production infrastructure are now largely in place for the nuclear program, technological progress on the missile front has been slower, the analysis says. North Korea has failed to make the kind of advances that Iran and Pakistan have made, although both countries relied on North Korean assistance for missiles in the 1990s.

Last October, the commander of U.S. forces in South Korea, Army Gen. Curtis Scaparrotti, said North Korea may be capable of fielding a nuclear-armed KN-08 missile that could reach U.S. soil, but because it has not tested such a weapon the odds of it being effective were “pretty darn low.”