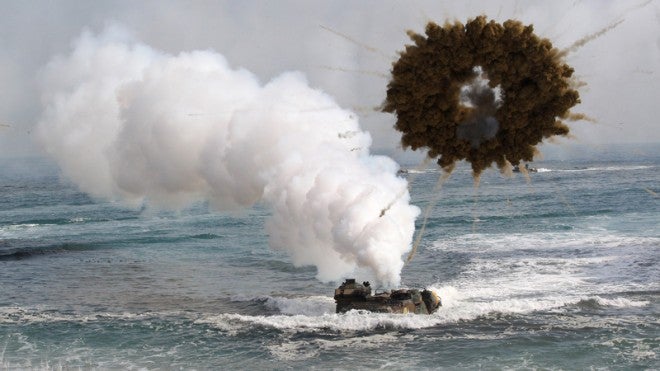 A South Korean marine LVT-7 landing craft sail to shores through a smoke screen during the U.S.-South Korea joint landing exercises called Ssangyong, part of the Foal Eagle military exercises, in Pohang, South Korea, Monday, March 31, 2014. South Korea said North Korea has announced plans to conduct live-fire drills near the rivals’ disputed western sea boundary. The planned drills Monday come after an increase in threatening rhetoric from Pyongyang and a series of rocket and ballistic missile launches in an apparent protest against the annual military exercises by Seoul and Washington. (AP Photo/Ahn Young-joon)

SEOUL – South Korea said Friday it had successfully test-fired a new ballistic missile capable of carrying a one-ton payload to any part of North Korea.

The announcement of the test is likely to fuel the current tensions on the Korean peninsula which saw the two rivals fire hundreds of live shells into each other’s territorial waters earlier this week.

The new South Korean missile, capable of carrying a one-ton payload up to 500 kilometers (310 miles), was developed under an agreement reached in 2012 with the United States to almost triple the range of the South’s ballistic missile systems.

The United States stations 28,500 troops in South Korea and guarantees a nuclear “umbrella” in case of any atomic attack.

In return, Seoul accepts limits on its missile capabilities and had previously operated under a range and payload ceiling of 300 kilometres and 500 kilograms (1,100 pounds).

Given the ambitions of nuclear-armed North Korea’s own missile program, the South had long argued for the limits to be extended.

The 2012 agreement, which was denounced as a provocation by Pyongyang, allows the South to deploy missiles with a maximum range of 800 kilometers.

While the maximum payload for that range remains 500 kilograms, the two parameters are inversely linked, so that for shorter ranges corresponding payload increases are allowed.

Just one month ago, inter-Korean relations appeared to be enjoying something of a thaw.

In February the two rivals had rare, high-level talks, after which they held the first reunion in more than three years for families divided by the 1950-53 Korean War.

Even when annual South Korean-US military exercises began at the end of February, the protests from Pyongyang were relatively muted, and there was talk of further high-level meetings and greater cooperation.

But the mood soon soured, and recent weeks have seen North Korea conduct a series of rocket and missile tests, culminating last month in the test-firing of the two medium-range ballistic missiles.

On Monday, North Korea conducted a live-fire drill along the disputed maritime border. After some shells crossed the boundary, South Korea responded and the two sides fired hundreds of artillery rounds into each other’s waters.

North Korean leader Kim Jong-Un warned this week that the situation on the peninsula was “very grave” and vowed to “thoroughly crush” what he called a US-engineered policy of hostility.