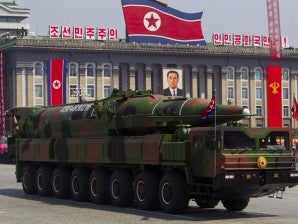 In this April 15, 2012, file photo, a North Korean vehicle carrying a missile passes by during a mass military parade in Pyongyang’s Kim Il Sung Square to celebrate the centenary of the birth of the late North Korean founder Kim Il Sung. AP FILE PHOTO

TOKYO – Japan has ordered its armed forces to shoot down any North Korean missile headed towards its territory, a defense ministry spokesman said Monday as speculation grows Pyongyang may fire one this week.

The official, who was speaking on condition of anonymity, said the order, which was issued Sunday, was routine and was being kept low-key.

“We won’t hold press conferences on this order because of Japan’s policy principle that we will not be swayed by North Korean provocations.

“If we announce this publicly and explain in details, North Korea will get to know part of our strategy,” the spokesman told AFP.

The order came as a top South Korean security official said Sunday that North Korea may test-launch a missile this week, while the United States has delayed its own missile test because of soaring tensions on the peninsula.

Kim Jang-Soo, chief national security adviser to President Park Geun-Hye, said a test-launch or other provocation could come before or after Wednesday, the date by which the North has suggested that diplomats leave Pyongyang.

North Korea, incensed by UN sanctions following its nuclear and missile tests and by South Korean-US military drills, has issued a series of apocalyptic threats of nuclear war in recent weeks.

It has also reportedly loaded two medium-range missiles on mobile launchers and hidden them in underground facilities near its east coast, fuelling fears of an imminent launch that may further escalate tensions.

North Korea also gave an evacuation advisory to some foreign embassies in the capital Pyongyang, warning it could not guarantee their safety after April 10 if a conflict broke out, although most appeared to be staying put.

Sunday’s order is similar to those Japan’s defence ministry has issued three times in the past — in April 2009 and in April and December last year — when North Korea launched what it called a satellite.

But this is the first time that an order has been issued before Pyongyang has announced any actual launch.

“There is not a high possibility that the missile would target Japan, but we have determined we should prepare for any contingency,” a government source told Kyodo news agency.