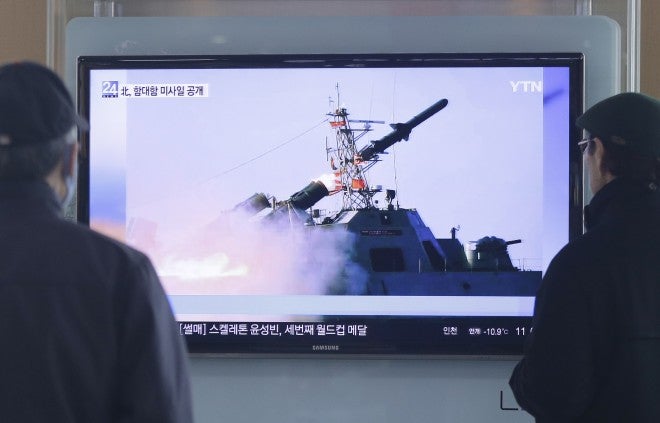 South Korean men watch a TV news program on the launch of North Korea’s new anti-ship cruise missile, at Seoul train station in Seoul, South Korea, Sunday, Feb. 8, 2015. North Korea said Saturday that it has test-fired a new anti-ship cruise missile, a move experts in Seoul viewed as an attempt to raise tensions ahead of joint military drills between the United States and South Korea. AP

SEOUL, South Korea — North Korea test-fired five short-range missiles into the sea on Sunday in its second such weapons test this year, a South Korean defense official said, amid dimming prospects for the resumption of high-level talks between the rival countries.

The missiles, fired from a North Korean coastal town, flew about 200 kilometers (125 miles) before landing in waters off the country’s east coast, a South Korean Defense Ministry official said on condition of anonymity, citing department rules.

North Korea routinely tests missiles, rockets and artillery, but the latest launches came with the two Koreas at odds over terms for a possible summit meeting between their leaders. The two countries last month floated the idea of the summit, which would be the third such meeting since they were divided 70 years ago.

North Korea separately told the U.S. last month that it was willing to impose a temporary moratorium on its nuclear tests if Washington cancels joint military drills with South Korea. But the U.S. has rejected the overture, calling it an “implicit threat.”

The North said Saturday that it had test-fired a new anti-ship cruise missile, and that the nation’s leader, Kim Jong Un, observed the firing. It did not say when the launch took place, but the South Korean official said it happened Friday. The official said it wasn’t immediately known whether the missiles fired Sunday were the same type launched two days earlier.

Last year, the North conducted an unusually large number of missile and other weapons tests, drawing protests from South Korea. The North still proposed a set of measures that it said would lower tensions, but South Korea rebuffed them, saying the country must first take steps toward nuclear disarmament.

The Korean Peninsula remains in a technical state of war because the 1950-53 Korean War ended with an armistice, not a peace treaty.

Read Next
Heavy fighting hits Libya’s Benghazi amid renewed offensive
EDITORS' PICK
Ahead of ONE: Full Blast II, Mongkolpetch warns Elias Mahmoudi: ‘Watch out for my fists’
Synology NAS: A photo storage and multimedia server for your home
DILG takes over Cotabato town as all officials go on quarantine
Local gov’ts may start COVID-19 vaccination of poor residents using excess supply
Tighter curbs sought in provincial COVID-19 hot spots
Alex Eala wins Grand Slam on Independence Day: ‘I hope I made my contribution to the country’
MOST READ
‘Hindi pwedeng take 2,’ Sotto tells presidential, VP aspirants
Lacson: Kind-hearted Leni ‘in it to win’ presidency in 2022, but…
Calida’s ‘mental calisthenics’
NCR Plus remains under GCQ from June 16-30
Don't miss out on the latest news and information.