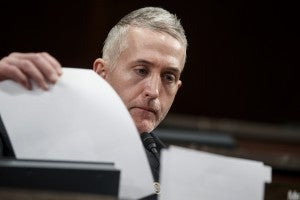 House Select Committee on Benghazi Chairman Rep. Trey Gowdy, R-S.C. reads an opening statement on Capitol Hill in Washington, Tuesday, Jan. 27, 2015, before demanding answers of witnesses from the State Department and the CIA, during the panel’s third public hearing to investigate the 2012 attacks on the U.S. consulate in Benghazi, Libya, where a violent mob killed four Americans, including Ambassador Christopher Stevens. AP

Troops loyal to Libya’s internationally backed government launched a new offensive to seize the extremist-held city of Benghazi, as witnesses saw corpses on the streets Sunday and ambulances racing by.

Information over what was happening in Benghazi, Libya’s second-largest city, remained unclear, though a medical official at al-Jalaa hospital, one of only two working hospitals in the city, said at least 10 people had been killed since Friday.

Benghazi has been held by the Shura Council of Benghazi Revolutionaries, an umbrella group for the city’s hard-line militias. Those militias include Ansar al-Shariah, which the U.S. blames for the September 2012 attack on the U.S. Consulate there that killed Ambassador Chris Stevens and three other Americans

Last year, renegade Gen. Khalifa Hifter led a unilateral offensive against the Benghazi militias. On Oct. 15, Hifter formally joined ranks with Libya’s elected government. Since then, they say they have managed to take control of most of the city.

Residents said Sunday that the military took control of large portions of al-Leiti, a Benghazi neighborhood regarded as a major stronghold for the extremist militias. They said government troops patrolled the neighborhood’s streets.

An official with the special forces of the elected government said their campaign began early Saturday. He said air forces backed up the ground troops.

He also said two men in his unit had been killed. He, as well as the hospital official, spoke on condition of anonymity because they weren’t authorized to speak to journalists.

The country’s post-Gadhafi transition has collapsed, with two rival governments and parliaments — each backed by different militias — ruling in the country’s eastern and western regions. The elected parliament was never allowed to properly convene due to a takeover of the capital, Tripoli, by Islamic and tribal militias. That parliament has been forced to function in the eastern city of Tobruk, while the pre-election parliament has declared itself legitimate and remains in Tripoli.