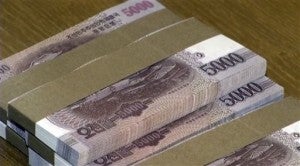 TOKYO — North Korea, long accused by the U.S. and others of engaging in counterfeiting, drug trafficking and even online gambling scams, is trying to repair its international image by courting a little-known but influential body that fights money laundering and terrorist financing.

Most mainstream financial institutions won’t go near North Korea, which is isolated by U.N. sanctions over its nuclear weapons program and by accusations it uses illegal activities to prop up its anemic economy.

So many North Korea watchers have been surprised and puzzled to see it engaging with the Asian affiliate of the Paris-based Financial Action Task Force on Money Laundering, a key body supported by the Organization of Economic Cooperation and Development, the World Bank and the United Nations Office on Drugs and Crime. North Korea remains one of just two countries on the task force’s blacklist, the other being Iran.

In a rare interview this week in Pyongyang with an AP Television News crew, the deputy governor of North Korea’s central bank said the country has taken several measures to cooperate with the task force since July, when Pyongyang announced it had joined the 41-member Asia/Pacific Group on Money Laundering as an observer.

The official, Jang Sam Ryong, said the moves are aimed at countering attempts by Washington to “disgrace the image of our country by abusing this organization.”

Jang said North Korea has already taken measures that include the creation of an independent Financial Intelligence Unit, the ratification of an international covenant on financing terrorism and revisions of its penal code.

To “intensify cooperation with the Financial Action Task Force,” he said, a National Coordinating Committee on the issue was created in August, made up of members from the Cabinet, law enforcement organizations, the central bank, the Financial Intelligence Unit and the ministries of finance and foreign affairs.

“We thought it was necessary to correct the misunderstanding of member nations brought about by the U.S. and promote mutual understanding by responding to the organization’s continual requests for negotiation,” Jang said.

The task force has welcomed Pyongyang’s moves, while noting that they are only a first step.

Gaining observer status in the Asia/Pacific Group isn’t a high bar — the group’s policy is to maintain contact with non-members to exchange useful information. But becoming a full member would require North Korea to participate in a mutual peer review system to determine its level of compliance with international standards.

Experts doubt that the North, officially known as the Democratic People’s Republic of Korea, intends to make dramatic changes to its financial system to satisfy the international community.

“I would imagine the DPRK has joined for two reasons,” said James Hoare, a former diplomat who established the British Embassy in North Korea and now teaches at the University of London. “One, to learn what is going on and what others are doing and, secondly, and probably more important, to make sure that its own interests are protected.”

The North is undoubtedly wary about growing support in Washington for what’s known in policy circles as the weaponization of finance: the aggressive use of sanctions and market-access denial to bring rogue players back in line.

Such proposals have won the day before.

In 2005, Washington took strong action against North Korea by imposing sanctions against a Macau-based bank, Banco Delta Asia, which held about $25 million in North Korean funds. The move was aimed at cutting of funds for North Korea’s top leadership, but created a ripple effect in the global financial system. It was later lifted to facilitate nuclear talks.

Jang said the watchdog organization first requested contact with the North in 2006, while the Banco Delta sanctions were in force, but Pyongyang refused because of the task force’s “hostile policies.”

David Asher, a senior fellow at the Center for a New American Security who oversaw the George W. Bush administration’s strategy against illicit activities and finances in the North, said Washington’s action in 2005 was justified and doubts Pyongyang has since changed its ways.

“The U.S. Department of Justice and Secret Service had the Central Bank dead to rights back in 2005 for not only counterfeiting, and printing the dollar, but also its leadership for circulating the notes and laundering money, so it would seem to be a remarkable turn of events,” he said in an email to The Associated Press. “I am extremely skeptical of the deputy governor’s sincerity.”

The task force also is unconvinced. In October, after North Korea had become an observer in the Asia/Pacific Group, the task force reaffirmed the country’s “high-risk and non-cooperative” status. It said in a statement that Pyongyang had not systematically addressed the problems and the “serious threat this poses to the integrity of the international financial system.”

The task force urged member states to continue to take countermeasures to protect their financial sectors from “ongoing and substantial” risks emanating from the North.

The problems are focused on money laundering. The U.S. removed North Korea from its list of state sponsors of terrorism in 2008.

North Korea is a rare beast in the world of international banking and finance — it’s almost invisible. 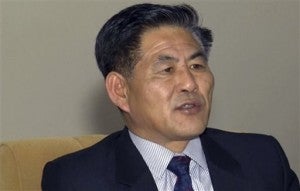 This image made from Associated Press Television News (APTN) video shows Jang Sam Ryong speaking with APTN during an interview on Monday, Feb. 2, 2015, in Pyongyang, North Korea. Jang, the deputy governor of North Korea’s Central Bank, said the country has taken several measures to cooperate with the Asian affiliate of the Paris-based Financial Action Task Force on Money Laundering since July, when Pyongyang announced it had joined the 41-member Asian affiliate as an observer.

Running a business, or even an embassy, in the country often requires physically carrying large amounts of cash across the border to pay rent and salaries. Though the U.S. action in 2005 was lifted, the stigma effect it created turned North Korea into kryptonite for most banks, which avoid transactions with the country even when they are not expressly banned.

North Korea is not a member of the World Bank, the International Monetary Fund or the Asian Development Bank — meaning it has essentially no access to the potentially huge financial benefits cooperation with those institutions could offer. Wary that even data as basic as its GDP will be used as a weapon by its enemies or critics, the country simply doesn’t report them.

Observers do not expect that to change, but they see strong reasons for North Korea to raise its profile in the global finance world.

“From Pyongyang’s perspective, it is a highly rational — even compelling — move,” said Lee Sung-yoon, of the Fletcher School of Law and Diplomacy at Tufts University. “By becoming an observer, North Korea will be better positioned to deny and deflect charges of money laundering, garner sympathy, and persuade its enablers like China to come to its defense.”