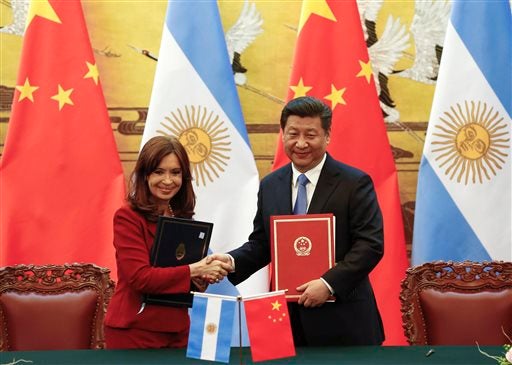 BUENOS AIRES, Argentina — Embattled Argentine President Cristina Fernandez, while on a state visit to China seeking badly needed investment, caused a furor by joking about her hosts’ accents on Twitter.

Fernandez tried to mimic a Chinese accent by switching “r’s” with “l’s” in a tweet in Spanish that translates as: “Did they only come for lice and petloleum.”

A few minutes later, she added: “Sorry, the levels of ridiculousness and absurdity are so high they can only be digested with humor.”

The tweets came as she met Wednesday with Chinese President Xi Jinping.

On Thursday, Chinese diplomats declined to respond to the comments by Fernandez, a prolific tweeter who has 3.53 million followers.

But that didn’t stop the Twitterverse in the South American country and beyond from exploding with criticism of what many considered a racist tweet.

“Cristina Fernandez’s lack of tact and respect is incredible,” wrote @FaundezLafarga. “She goes to China looking for (economic) agreements and she makes fun of their accents.”

@GuyChazan wrote: “Faux pas in China. Really, this sort of joke went out of fashion in the 70s.”

Since Twitter is blocked in China and no Chinese state media have reported on it, the accent-mimicking went largely unnoticed by the Chinese public.

For a handful of Chinese who read about it in foreign media, some brushed it off as a joke with no ill intent, while others challenged Fernandez to speak proper Chinese. China’s foreign ministry declined to comment on it at its daily briefing Thursday.

The controversy comes as Fernandez struggles to distance herself from the mysterious death of prosecutor Alberto Nisman, who was found dead in his bathroom Jan. 18, hours before he was to elaborate on allegations that Fernandez helped shield Iranians connected to the 1994 bombing of a Jewish community center that killed 85.

Fernandez has vehemently denied the accusations, saying Argentina had nothing to gain from such a deal. She has suggested that rogue elements in the intelligence services ordered Nisman’s death, but has not elaborated.

Earlier this week, just as her visit to China was getting underway, investigators looking into Nisman’s death said they had found an arrest warrant for Fernandez that Nisman had written up. While he never presented it, the revelations brought Fernandez back to the center of the case.

On Wednesday, relatives of victims of the bombing marched with family members of the victims of Argentina’s military dictatorship and other national tragedies to demand an end to impunity and the truth about what happened to Nisman.

Hundreds of demonstrators gathered in front of Congress in Buenos Aires with the march ending in the famed Plaza de Mayo.

“The demand for truth and justice that relatives of the AMIA (Jewish center) victims are making is the same as what we want for the 30,000 people who disappeared” during the dictatorship, said Nora Cortinas, who co-founded the Mothers of the Plaza de Mayo human rights group.