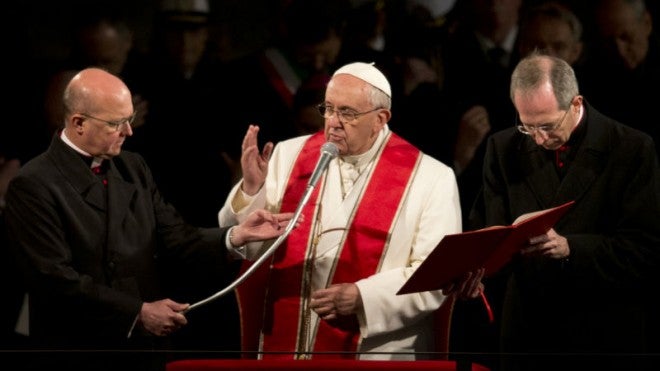 Pope Francis blesses the faithful during the Via Crucis (Way of the Cross) torchlight procession in front of the Colosseum on Good Friday in Rome, Friday, April 3, 2015. (AP Photo/Alessandra Tarantino)

ROME— Pope Francis, presiding at the traditional Good Friday Colosseum procession, decried what he called the “complicit silence” about the killing of Christians.

The evening, torch-lit ceremony at the ancient arena recalls the suffering and death of Jesus by crucifixion.

READ: GOOD FRIDAY: Why did God have to die on the cross? | Pope washes feet of 12 inmates, 1 infant

After listening silently, often with head bowed and eyes tightly shut, to reflections read aloud about Jesus’ suffering, Francis pressed what lately has been an urgent concern of his papacy — the present-day martyrdom of Christians in parts of the Middle East, Africa and elsewhere.

“We see, even today, our brothers persecuted, beheaded and crucified, for their faith in you, in front of our eyes or often with our complicit silence,” he said, as he prayed.

A few hours earlier, Francis had condemned the deadly attack by Islamic militants targeting Christians at a Kenyan university. Earlier this year he denounced the murder in Libya of 21 Coptic Christians by Islamic State-affiliated militants, saying they were slain simply for being Christian. And he has lamented how Christians in parts of the Middle East have been forced to flee their ancient communities to escape persecution.

Among those chosen to take turns carrying the lightweight, slender cross in the procession were faithful from Iraq, Syria, Nigeria, Egypt and China.

One of the prayers during the procession called for the “fundamental right of religious freedom” to spread throughout the world.

In another reflection, a lector said “our conscience is troubled. We anxiously ask: When will the death penalty, still practiced in many states, be abolished?” There was also an appeal for the end of all torture.

Tens of thousands of tourists, pilgrims and Romans held candles as they joined in the prayers on a warm night.