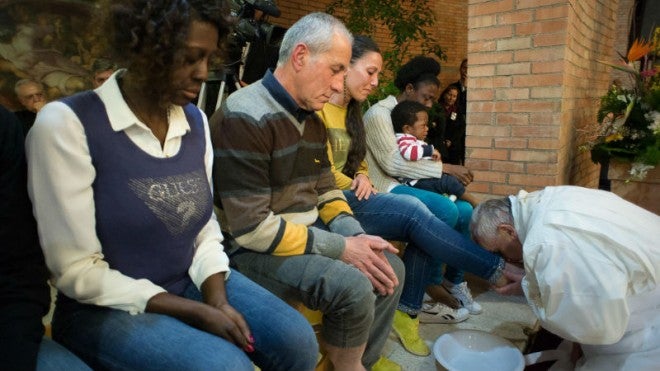 Pope Francis, right, kisses the foot of a woman at Rebibbia prison in Rome, Thursday, April 2, 2015. Pope Francis washed the feet of 12 inmates and a baby at Rome’s main prison Thursday in a pre-Easter ritual meant to show his willingness to serve. He asked them to pray that he, too, might be cleansed of his “filth.” (AP Photo/L’Osservatore Romano, Pool)

VATICAN CITY— Pope Francis washed the feet of 12 inmates and a baby at Rome’s main prison Thursday in a pre-Easter ritual meant to show his willingness to serve. He asked them to pray that he, too, might be cleansed of his “filth.”

As the inmates wept, Francis knelt down, poured water from a pitcher onto one foot apiece, dried it and then kissed it, re-enacting the ritual that Jesus performed on his apostles before he was crucified.

The inmates included six men from Rebibbia prison and six women from the nearby women’s detention center. One was a mother carrying her son on her lap: Francis washed and kissed his little foot as well.

Francis has revolutionized the Holy Thursday foot-washing ceremony by performing it on women and non-Catholics and by travelling to detention centers and facilities for the sick. Vatican rules say the ritual should be performed on men, given that Jesus’ apostles were male.

In a Holy Thursday homily delivered in the prison chapel, Francis sought to give the inmates hope, telling them that Jesus loved them to the point of giving his life for each and every one of them.

Speaking off-the-cuff as he has done for the past three years on Holy Thursday, Francis explained the foot-washing ceremony is meant to show Jesus’ willingness to serve others like a slave, to cleanse and purify them completely.

“Even I need to be cleansed by the Lord,” he said. “And for this, pray during this Mass, so that the Lord also washes my filth also, so that I become more slave-like in the service of people as Jesus did.”

Francis has focused much attention on prison ministry, denouncing the death penalty as inhumane and calling life terms “hidden” death sentences. He has met with inmates frequently, including during a recent trip to Naples, where he lunched with gay and transgender prisoners.

Francis was warmly greeted by the inmates as he entered the prison and he lingered after the Mass to greet more at the front of the chapel. They kissed him on each cheek and stroked his hand. He let them linger, sensing their need for a human touch.

He also let liturgical protocol go by the wayside as he walked down the chapel aisle, allowing inmates to clamber up and touch him amid loud applause.

Holy Thursday marked the start of a busy four days for Francis. On Friday, he performs the late night Via Crucis procession at Rome’s Colosseum. On Saturday, he presides over the solemn Easter Vigil and a few hours later he celebrates Easter Sunday Mass.