GOOD FRIDAY: Why did God have to die on the cross? | Inquirer News
Close
menu
search

GOOD FRIDAY: Why did God have to die on the cross? 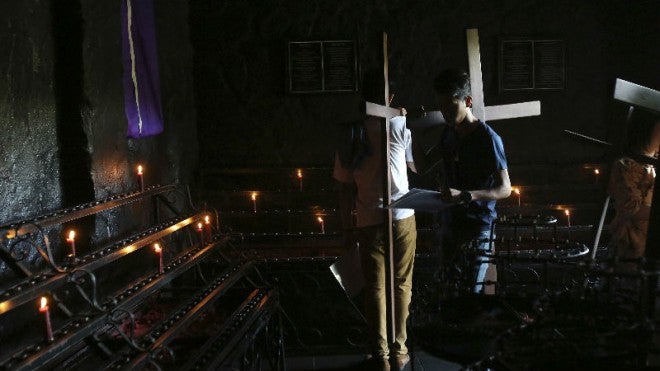 Filipino devotees carry wooden crosses as they make the Stations of the Cross at the Philippine Center of Saint Pio of Pietrelcina on Wednesday, April 1, 2015 in suburban Quezon city, east of Manila, Philippines. Devotees practice different religious rites during the Holy Week in this predominantly Roman Catholic country. (AP Photo/Aaron Favila)

Every Good Friday, Christians recall the Crucifixion and Death of Jesus Christ.

Followers are taught that Jesus is God’s Son—and therefore God—who became man and died a horrible death to ransom man from sin and death.

“But why?” ask many as they question the “logic” of God needing to die for man.

If the Christian God was truly God, skeptics say, He could have just waved off the sins of men if these repented.

“You are forgiven,” He might have simply commanded. End of story. No blood. No gore. No dying. No crucifixion. No Good Friday.

So, why did God have to die on the cross?

From a Biblical perspective, the answer starts with God being a God of order who put everything in its proper place and arranged the proper sequence of things.

This set of order is known as God’s will, which all should follow.

A person who deviates or goes against the will of God misses the mark. He commits sin.

The God of order is also a God of justice.

When God created man, He loved man so much that he willed for him to live forever, which was why He allowed man to eat from the Tree of Life in the Garden of Eden. (Genesis 2:9, 16)

But instead of following God’s will, the first man and woman disobeyed God and ate the forbidden fruit—the fruit of the Tree of the Knowledge of Good and Evil (Genesis 3:1-6).

This disobedience broke the divine order. They committed sin. So, death came to man. And with death were pain and suffering. (Genesis 3:16-19)

As a consequence, God threw them out of paradise and they were banned from the Tree of Life, from eternal life, forever. (Genesis 3:24)

In all these, God was the key actor. He was the one who established the order of things, the one who set punishment for sin, the one who put man out of reach of eternal life.

Being a mere creature, man could not reverse or undo what God had done. Nothing that man could do could pay for his sins against God. Only God could undo what He did.

So, why didn’t God just say “You are forgiven”?

Because as God, it was natural for Him to forgive within the same order that He fashioned. He had to act according to His own will, which was His expression of who He was.

But no one was worthy to ransom man, except God Himself.

That was why in the fullness of time, God Himself, in the person of His Son Jesus, became man to represent both man and God in this work of forgiveness, salvation and reconciliation.

Being both God and man, Jesus was the perfect mediator for man to receive God’s mercy and compassion. (1Timothy 2:5)

No other sacrifice would have sufficed.

And that is why God died on the cross. That is why we have Good Friday.

The author writes “Tumbukin Natin,” a blog in Filipino, which seeks to explain Catholic beliefs and practices to the common man.