For some devotees, self-flagellation their own passion, penance, prayer

Despite the rejection of the Catholic Church, self-flagellation continues to draw huge crowds in the predominantly Catholic Philippines during the Holy Week.

In Mandaluyong, hundreds of hooded devotees flagellate themselves as part of their Good Friday penance. 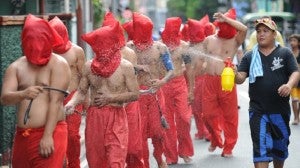 A man (R) sprays penitents with water to cool them down as they flagellate themselves as part of Lenten observance in Manila on April 2, 2015. The dominant Roman Catholic church does not condone flagellation and other extreme acts of penitence including gory Good Friday reenactments of the crucifixion of Jesus Christ, but devout Catholics say it is a means of atoning for their sins and to implore God to spare them and other members of their families from illness or bad luck. AFP PHOTO/TED ALJIBE

John Rio, a resident of Hagdang Bato said he has been flogging himself for the past 10 years as part of his yearly penance.

“Hindi lang ito basta paghahampas sa sarili, nasa loob at puso namin ito (We are not merely whipping ourselves, we are doing this with our hearts),” Rio told INQUIRER.net.

After flogging himself, Rio kneeled and was hit in the back with “taktak” or a piece of wood with bits of broken glasses.

The 29-year-old devotee said this is a way to cleanse his sins.

According to him, self-flagellation is already a decades-long tradition in their village.

Asked if he would allow his son to do the same, he said he would not hinder his son if he decides to join the yearly tradition.

READ: How other faiths in PH observe Holy Week

De Guzman said he has been doing it for five years and he won’t be tired doing the tradition.

“’Di ako napapagod kasi habang ginagawa ko ‘to ay nagdarasal ako (I don’t get tired, because every time I do this, I pray),” he said.

He said he respects the views of the church against self-flagellation.

Aside from self-flagellation, part of the tradition was having a man dressed as Jesus, who took turns in carrying the cross while being whipped by other devotees.

Ryan Gutierrez was among the devotees dressed as Jesus who was clubbed by stainless steel while carrying the cross. 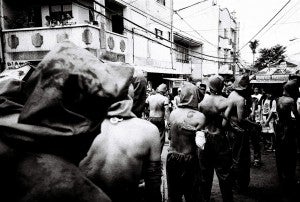 Devotees flagellate themselves in Mandaluyong as form of sacrifice. PHOTO BY JOSEPH GARIBAY/INQUIRER.net

Gutierrez said he is willing to endure the pain as part of his sacrifice.

“Marami akong hiling sa Panginoon. Bago ka pagbigyan, kailangan magsakipisyo ka muna (I have so many wishes to the Lord. I think that before He hears one’s prayers, one has to make sacrifices first),” he said.

He said the tradition has been passed on to him by his relatives.

Church against self- flagellation

The Catholic Church has expressed its opposition against self-flagellation and other forms of physical hurt that inflict harm to the human body. 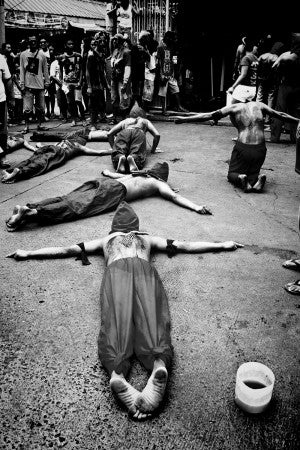 Devotees flagellate themselves in Mandaluyong as form of sacrifice. PHOTO BY JOSEPH GARIBAY/INQUIRER.net

(We do not support physical violence like hitting or crucifying oneself. One should not be hurting one’s body because it is the temple of the Holy Spirit.)

(The essence of the Holy Week is imbibing the sacrifice of God. What is important is changing one’s life for the better and living in accordance with God’s life.)

He said there are other ways to express penance and sacrifice like helping the poor, practicing humility, and being one with other people who are suffering.

But for Richard de Guzman, organizer of the senakulo, the tradition would continue despite the opposition of the Catholic Church.

“I have nothing against the Roman Catholic Church regarding their point. We have our own way to express our faith,” he said, adding that the tradition has been practiced for 37 years now. “Walang bayad, purely pamamanata (We don’t expect to get paid, we just want to practice our faith).” IDL

Read Next
GOOD FRIDAY: Why did God have to die on the cross?
EDITORS' PICK
Beyond water service: Maynilad builds massive infrastructure projects to clean up Metro Manila waterways
DOTr-TWG: Motorbike taxi rider cap in NCR up to 15,000 per firm
Patrols search towns for defiant residents
DOH checks possible case of SARS-like virus
Timeless Elegance in the Philippines’ Most Distinguished Home Kitchens
Best Gift Ideas in the Philippines
MOST READ
Chinese sex den used lighters to get clients
Manila roads to be closed on Jan. 24 for Chinese New Year
Villagers, cops given 48 hours to flee Taal Volcano danger zone
Yassi Pressman backs sister Issa amid James-Nadine breakup
Don't miss out on the latest news and information.