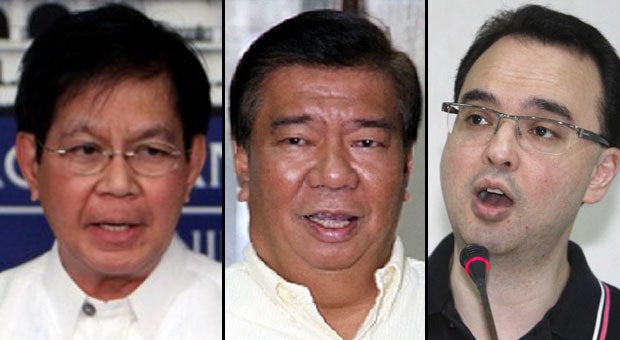 Name names and back it up with evidence, senators demanded Thursday.

Disclosures by Justice Secretary Leila de Lima and Presidential Assistant Panfilo Lacson that Janet Lim-Napoles, the alleged mastermind of the P10-billion pork barrel scam, has written affidavits implicating more than a dozen senators—past and present—drew sharp reactions in the Senate.

The senators expressed concern that the disclosures were damaging the institution.

Senate President Franklin Drilon called a news conference to deny that he was on a purported list of 19 senators involved in the diversion to kickbacks and ghost projects of the lawmakers’ allocations from the Priority Development Assistance Fund (PDAF), a pork barrel that channeled funds to projects in congressional districts.

“If the list is supported by credible documentary evidence, please go ahead. But if it’s just a list, perhaps it would be better if we just take care of the institution of the Senate,” said Drilon, whose photograph with Napoles in a party went viral on social media after the scandal broke out last July.

Drilon noted that his public approval and performance rating had climbed to 58 percent in the latest Pulse Asia survey, a development that he attributed to the public again giving lawmakers and the institution their trust and confidence, “which undeniably had been eroded due to the pork barrel scam controversy.”

“There are many text messages saying my name is among those of 19 senators, who Janet Napoles has implicated in the pork barrel scam. Well, I guess they are at it again. These are the black propaganda operators who were doing the same thing last year. They have been tapped to muddle the issue by spreading lies and baseless accusations,” Drilon said.

Drilon said he had never assigned any of his PDAF allocations to any of Napoles’ fake nongovernment organizations (NGOs). The only NGO recipient of his PDAF, Drilon said, was the Federation of Filipino-Chinese Chambers of Commerce and Industry Inc., which built classrooms at half the normal cost.

Senate Majority Leader Alan Peter Cayetano, in a news forum, appealed to Lacson “to give details and let the people mentioned defend themselves.”

“Given the public interest and the institution is suffering, the more information we get, the better.  Of course, the better appeal is for Napoles.  If your conscience is bothering you, or you’re concerned about your physical, spiritual well-being, tell all right away. Don’t strategize, don’t allow others to influence you,” he said.

“I’ve always been in favor of naming names especially if it is in a document …  I mean, if my name is on it, I want it out and I want to answer,” Cayetano said.

“I am concerned for the institution because if we lose all of them, that will be a constitutional crisis,” Cayetano said.

Sen. Teofisto Guingona III, chair of the Senate blue ribbon committee, acknowledged he had received calls to reconvene the panel, which had wrapped up hearings on the scam and recommended the prosecution for plunder of three colleagues—Senators Juan Ponce Enrile, Jinggoy Estrada and Ramon Revilla Jr.

Guingona released his draft report for signature of the committee members on the same day the Office of the Ombudsman, on April Fools’ Day, and announced there was sufficient evidence to prosecute Napoles, the three senators and six others for plunder in connection with the PDAF scam.

Guingona said in a statement that the committee had “opted to take the prudent course” and wait for De Lima to complete the evaluation of Napoles’ disclosures. When the committee receives the affidavit, it will likewise conduct an evaluation before deciding if a new hearing is warranted, Guingona said.

The three senators have denied wrongdoing.

Estrada said he had been insisting that more lawmakers were involved in the scam. “The problem is from the very start they have been sanitizing the list as regards the pork barrel scam.  They have been very selective. It’s now coming out that their true motive was to implicate just the three of us,” Estrada said in a telephone interview.

“Senator Lacson would serve the public well if he would just release the document given to him.  That way, the document would speak for itself,” Sen. Antonio Trillanes IV said in a text message.

Lacson, a former senator who was drafted by President Aquino to oversee recovery efforts in typhoon-devastated Eastern Visayas, told reporters on Wednesday that the Napoles camp issued feelers to him requesting assistance on a decision by the businesswoman to tell all she knew about the alleged operation to channel PDAF funds to ghost projects of NGOs under her control and kickbacks to legislators.

In late March, he said Napoles’ husband Jaime, a retired Marine major, gave him an unsigned draft affidavit outlining the PDAF schemes. The former general and head of the Philippine National Police said a meeting was being arranged between him and Napoles when De Lima on Tuesday announced that the businesswoman had executed and signed in the presence of her lawyer an affidavit on the scam.

Napoles went into hiding for two weeks after a warrant was issued for her arrest for the serious illegal detention of her former aide, Benhur Luy. Fearing for her life, she surrendered in late August to President Aquino and was subsequently detained at the PNP antiterrorist camp in Sta. Rosa, Laguna. For the past three weeks, Napoles had been confined at Ospital ng Makati for the removal of a tumor in her uterus.

Last Nov. 7, Napoles told the blue ribbon committee she knew nothing about the PDAF scam.

De Lima said on Tuesday Napoles decided to tell all on the eve of her surgical operation, claiming that she and her family had been receiving death threats.

Read Next
Smooth Edsa ride up in 2 years, but…
EDITORS' PICK
Nestlé Philippines’ ‘NESCAFÉ Plan’ bags Grand Anvil at PRSP 56th Anvil Awards
Smart reinforces superiority with best speed and mobile video experience in PH
Every Filipino home can now be a smart home with realme TechLife
New 3,045 COVID-19 cases push PH total active cases to 40,074
LTO’s P500-M deal for screws draws scrutiny
How to lose a PH genius: Wesley So officially a US citizen
MOST READ
How to lose a Filipino genius: Wesley So officially a US citizen
US lays out list of aid to ‘satisfy’ Duterte following VFA payment demand
Robredo on Sara Duterte leading poll surveys: Why are Filipinos drawn to leadership of this kind?
Duterte order to police, military on Reds: ‘Kill them all’
Don't miss out on the latest news and information.